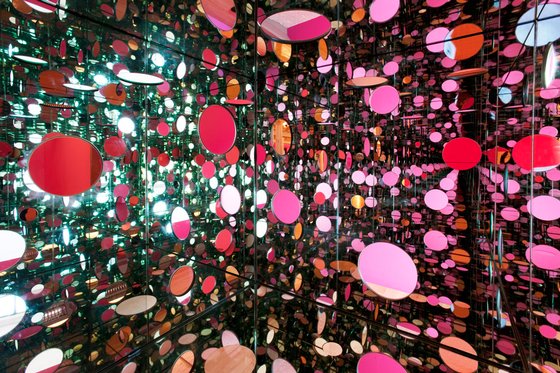 A leaflet arrived in the post the other day, and, because it was covered in polka dots — pink, red, yellow and blue — I assumed it must be something about Damien Hirst. The Gagosian Gallery recently opened 11 simultaneous exhibitions around the world devoted exclusively to Hirst’s famous Spot Paintings. With a Hirst retrospective also arriving at Tate Modern in April, I imagined the leaflet was about that. But no. It was about the new pocket Tube map brought out to coincide with the Olympics. The polka dots on its cover were actually the handiwork of Yayoi Kusama, a veteran Japanese artist who also paints dots. Thus was launched the great Dot War that is tearing the nation asunder.

Dot War is perhaps an exaggeration. Pearl Harbor this isn’t. What I should more truthfully describe is a situation where Kusama, who is 82, laid polite claim to the dot in a recent press interview at Tate Modern — “I have been using polka dots since I was a very young child.” Hirst, who is 46, has remained unusually quiet on the subject. Usually, he calls in the lawyers when his originality is threatened. I am an experienced Hirst-watcher, so if I assumed that the new London Underground pocket map was by him, it is absolutely certain many others would have done the same. In these circumstances, I would have expected him to have summoned Rumpole immediately. On this occasion, however, he wouldn’t have had a legal leg to stand on. Nor, for that matter, would Kusama, were she to be as litigious as Hirst. When it comes to the dot in art, both these obsessive ­contemporary spotters are Johnny-come-latelies.

I was tweeting on these dotty matters last week when a friendly follower directed me to a useful page devoted to the history of the polka dot. It turns out that the name comes from the famously energetic dance I used to be able to manage in my youth. I don’t know if you’ve tried the polka, but, believe me, you need fast feet to do it well. I had always assumed it was named after the Slav word for a Polish girl — polka — but a less pleasing origin myth leads back to the Slav sounds, pul-ka, or half a step, describing the motion of the dance. By 1840, the polka was madly popular in England, particularly among the depressed working classes, for whom it offered a joyous release. English girls began wearing spotty dresses to mimic the ­frantic rhythms of the Bohemian dance. The polka dot was born.

All this is worth remembering here because it highlights the innate joie de vivre of the polka dot. Its bounciness is surely the core reason for its continuing popularity. You don’t often see polka dots at a funeral. ­Interestingly, though, neither Kusama nor Hirst produces happy dot-art.

The Kusama show that has opened at Tate Modern is a particularly neurotic event. On the outside of the exhibition is an arrangement of gigantic red ­balloons covered obsessively in white dots, followed by more ­balloons, and more dots, and so on. This is a use of the dot that has something in common with the behaviour of dogs when they pee on lampposts: it’s a kind of obsessive marking and claiming of territory. Balloons are ­supposed to be innocent and merry. These are as creepy as a circus clown.

Since 1977, Kusama has lived in a psychiatric hospital in Japan. Her noisy re-emergence in the 1990s, after a long period of ­international obscurity, is due in part to her notorious status as a psychiatric patient, which has ­coloured everyone’s perception of her and made her a heroine of survival. Had Hirst dared to set his lawyers on her for pinching his dots, he would have faced not only a ­barrage of chronological evidence, but some irate and impassioned Kusama fans.

I Who Committed Suicide, from 1977, meanwhile, is a frantic self-portrait in which the artist’s face is invaded by waves of coloured dots. The so-called Infinity Net paintings produced in New York in the 1960s look like huge expanses of tiny dots from a ­distance, but when you get close, you see that only the spaces between the dots have actually been painted. There are no dots. Just relentless obliteration.

All this is spooky and fascinating. I’m not sure how much homework Transport for London did on Kusama before it handed over the design of the pocket Tube map to her, but let all Olympic Tube users be warned that they are carrying about in their pockets some serious psychotic disquiet.

Which cannot be said of ­Damien Hirst and his dots. Hirst’s Tate retrospective is due to open on April 4, so I do not yet know how prominently the Spot Paintings will feature in it. Indeed, I cannot even be sure that the decision to show Kusama next to Hirst at Tate Modern was as naughtily deliberate as it appears to be. Perhaps the great Dot War is merely a coincidence?

One thing that is certain is that Hirst’s polka dots have a completely different presence from Kusama’s. Where hers are shrill and obsessive, his are calm and pretty. While Kusama spews out her dots in uncontrollable quantities, Hirst arranges them in careful ranks. Even when he gives them dangerous-sounding names such as Cocaine Hydrochloride or Morphine Sulphate, his Spot Paintings maintain their composure. I used to own one until hard times forced me to sell it, and I can put my hand on my heart and say I never tired of looking at it or ever saw its colours in the same way twice. And it is this elegant calm that I recognised when I encountered it again in the work of Eugène Chevreul, the true father of the dot in art.

Chevreul was a brilliant French chemist who was born in 1786 and lived to 102. At one point in his immense career, he worked in a tapestry factory, and, while he was researching the differing optical effects of coloured dyes, he made a discovery that changed art and led him deep into the world of dots. What Chevreul found was that the impact of a colour depends critically on the colour next to it. So a blue will look different when it has a red next to it from the way it does when it is next to yellow. Working his way carefully through every minute millimetre of the colour range, Chevreul produced a pioneering book on colour theory called The Principles of Harmony and Contrast of Colours, and Their Applications to the Arts, which he illustrated with page after page of polka dots, arranged studiously in rows on a white background — just as they are in a Hirst Spot Painting.

Now, I have no idea whether Hirst has ever seen this book or any bits of it, but I know for sure that Seurat, the founder of pointillism and another pioneer of the dot in art, examined it carefully, because I have flicked through the very copy he used. It’s preserved in the library of the Ecole des Beaux-Arts in Paris, where Seurat studied and hatched his first plans to paint his great paean to the dot, Sunday Afternoon on La Grande Jatte. As I thumbed through the same Chevreul book Seurat thumbed through, I found myself grunting excitedly at the evident beauty of Chevreul’s carefully massed ranks of polka dots. Way back in 1839, Chevreul had already grasped one of the driving truths of contemporary art: that nobody can paint the same polka dot twice.