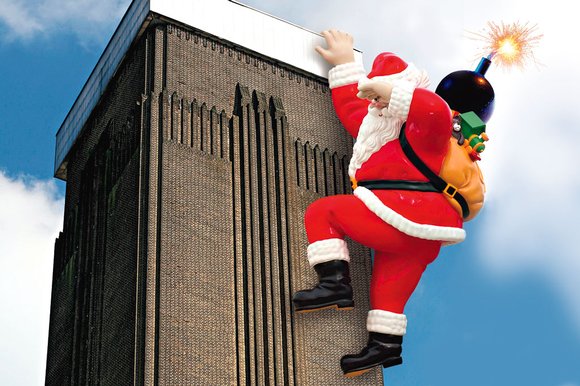 Dear Santa, I know I have been a bad boy this year. Badder even than last year. The horrible things I wrote about the big sculpture show at the Woyal Academy were really rude. I wanted to like it, honest I did, Santa. For months and months before it opened, everybody was saying it was going to be so marvellous, and when they do that, it’s called “hyping it up”, and means the show will be really, really good whether it’s any good or not. But when I finally saw it, I couldn’t work out where the beginning was. Or the end. So I just exploded, like Elmer Fudd does when he can’t catch Bugs Bunny. Sorry, Santa.

The Woyal Academy was miles better when that funny little man with a nose like a can-opener was the boss there. He was called Roman Nosenthal. Or maybe it was Norman Rosenthal. His shows were great. But they got rid of him. And brought in a new man called Charles Saumarez Smith, who isn’t actually called that because I heard a woman on television introduce him as Charles Saumarey Smith, as if the Z wasn’t there. His shows are rubbish. So Santa, for my first Christmas present, pleeeeze bring back Roman Nosenthal.

Although I was a bad boy this year, Santa, I wasn’t as bad as Mr Brian Sewell, the art critic of the Evening Standard. My mum nearly fainted when she read his diary. Did you know that when he was younger, Mr Sewell did naughty things with 1,000 people in five years? The older boys at school have added a C and an R to his name now.

So my second wish, Santa, is that you stop Mr Screwell writing more of his diaries. My mum says there is “too much information” in them. I thought information was a good thing. But if it upsets my mum, I don’t like it.

The present I want mostest, Santa, is if you could get rid of those boring films that artists make. The ones that go on and on for ever and never actually mean anything. The ones that are called “video art”. There’s a humongusly big one playing in Tate Modern right now in the Turbine Hall. You can’t miss it, Santa. It takes up an entire wall and was made by a lady called Tacita Dean. I don’t know how good Ms Dean really is at art, because I’ve never seen any of her drawings. But I have seen lots of her films. They are compulsory in modern art. There was one about a ruined house in the Caribbean. What happened was that you went inside the house and spent ages looking around it. That’s it.

Don’t get me wrong, Santa. I love films when they are made by people whose job is making films. Once, when mum was out, I watched Last Tango in Paris, which I thought was going to be about a French boy searching for his favourite bottle of pop. But it turned out to be a really, really naughty film about two people who prefer butter to margarine. That was exciting. What I don’t get is why real films are just films, but when you put them in an art gallery and the camera goes all wonky, they become “video art”. And can be as boring as they want.

Some bits of “video art” are not totally, totally boring. There’s an artist called Bill Viola who makes spooky films about people falling through water as if they are being baptised.

He’s good. And this year at the Venice Biennale, an artist called Christian Marclay showed a film that lasted 24 hours, in which people from other films kept looking at their watches to see what the time was. So whenever you watched his film, it told you the correct time. That was really clever. But Ms Dean’s humongus film at Tate Modern is a big yawn. It’s full of the things you always see in “video art”. Close-ups of eyes. Close-ups of leaves with the sun behind them. Close-ups of waves. Yawn, yawn, yawn.

My mum told me that artists are special people who see the world in different ways. And that they use whatever they can to convey things. So I’m definitely not saying that “video art” isn’t actually art. But when I was in Form 3, the art teacher, Mr Gombrich, took us on a school trip to Florence, and there was a funny painting in the Uffizi Gallery by an artist called Bronzoni or something, of a dwarf at the court of Cosimo de Medici. This dwarf’s job was to make the Medici laugh. He was like Peter Kay today, or Frankie Boyle. But the weird thing about the painting was that it was painted on both sides, the front and the back.

On the front, the dwarf is setting off on a hunting trip with his pet owl and, for some reason, he is naked, so you can see his willy. That is how they did things in the Renaissance. But on the other side of the picture, you see him from the back with his bottom showing. This time, the owl is perched on his shoulder and all the dead birds he has caught on his hunt are in his hand.

Mr Gombrich said that Bronzoni — or was it Bronzino? — made the picture specially to prove that painting was a better art form than sculpture. Because a painter could show the naked dwarf from the front and the back, just as a sculptor could, but he could also paint the time it took him to catch the birds. At the front, the dwarf is setting off on the hunt. At the back, he’s coming home from it. So Bronzino has painted time passing without any real time having to pass!

Mr Gombrich also told us that a few hundred years later, another painter, called Gauguin, who lived in Tahiti, wrote a letter to his friend in which he too explained why art is the best art form. Better than music, books, plays, poems. Gauguin said it was because you don’t need to wait a long time for art to finish. With music, you have to listen till the end. With books, you have to read till the last page. But a painting means everything straight away. You can look at it for as long as you want afterwards. But nothing new needs to happen to the painting for it to be finished.

I was thinking of what Mr Gombrich said when I watched Ms Dean’s humongusly big film at Tate Modern. After a few minutes of close-ups of eyes and waves and leaves, I was ready to go. But that would have meant I had not seen the film to the end. Which would have been naughty. Like walking out in the middle of Shakespeare. Next year in Germany, in a town called Kassel, there’s a mega-humongus exhibition taking place called the Kassel Documenta. It only happens every five years, and the best modern artists in the world will be there.

But I’m dreading it, Santa. Because the last Kassel Documenta was packed with “video art”, and going round it was TORTURE. It’s not like going to the cinema, where you only have to see one film at a time and the seats are really comfortable. At Documenta, you have to see 20 or 30 films in a single afternoon. So you spend the whole day cooped up in the dark. It’s like living in a coffin.

The worst thing is that to see all the “video art” properly, from beginning to end, would actually take you several months. And I would need to miss school. We might even have to move to Kassel. Either that, or I would keep bunking off before the end and never finish the “video art”. Which would be really, really naughty, right, Santa?

So my final wish is that you stop “video art”. All of it. If that is asking too much, can you at least impose some sort of time limit on it? Say, two minutes. Max.