The Saatchi’s latest show, Gesamtkunstwerk, is a powerful survey of new Teutonic art — with a respectful nod to the past 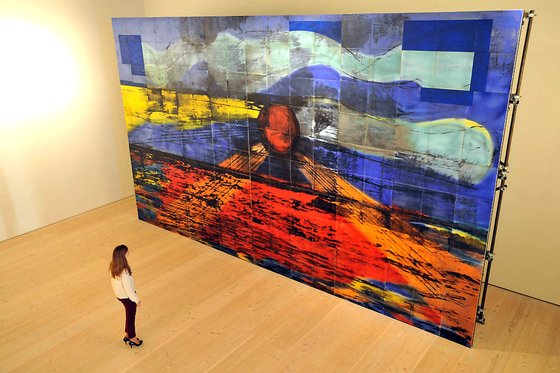 Gesamtkunstwerk is a word that gets bandied about in modern art. In fact, I would have it in my top five annoying bits of art jargon employed by all those verbose art-aratchiks who try to sound quasi-scientific in their ramblings about contemporary art. “Gesamtkunstwerk” is not nearly as annoying as the ubiquitous use of “practice” to mean “work” — as in “my practice involves putting paint on canvas” — but it is pretty annoying, nevertheless.

I doubt that whoever came up with Gesamtkunstwerk as the title for the new collection of German art at the Saatchi Gallery was overly exercised by the origins of the expression. In fact, it was Wagner who thrust it into art’s language, in a set of essays about the aesthetics of the future. “Gesamt”, meaning “whole”, and “Kunstwerk”, meaning “artwork”, had to be brought together to describe the all-embracing art experience that lay ahead, Wagner hoped. Opera, with its amalgam of music, drama, rhetorical acting and stage design, came close to being an existing Gesamtkunstwerk, but the future had something even mightier in store: a momentous fusing of art forms that would immerse the spectator in a new aesthetic baptism.

That is not what happens at the new Saatchi show. This is not an event that will have you imagining the salvation of the fatherland or rowing up and down the Rhine, seeking singing maidens. Instead, you will encounter the usual Saatchi mixed bag of youngish, newish artists, some of whom have something Gesamtkunstwerk-ish about their output, others of whom could do with practising their practice. That said, several of these exhibitors are real finds, and Gesamtkunstwerk is an unexpectedly engrossing event.

The first artist you encounter, Markus Selg, is also the one whose impact most fully fits the Gesamtkunstwerk description. His display consists of sculpture, furniture, prints and paintings, all happening at once. The opening sculpture, called Mild and Quiet as He Smiles, appears to be a ceramic statue of a standing Buddha. The dark-robed figure, with his hair in a topknot, greets you with his arms crossed gently in front of him and an attractive air of calm.

So fully Buddha-like is the statue’s initial presence, some will take him for a cheap reproduction of the sort you might buy at an Indian garden centre. A closer inspection, however, reveals that he isn’t a ceramic at all, but a sacred scarecrow fashioned out of straw and plaster, covered with shellac. As you examine him more carefully, you begin to sense something timid and needy in his bearing. This is not a faith-stall Bodhisattva broadcasting off-the-peg peace and love. This is a straw and plaster Buddha hugging himself for comfort and admitting to his frailty.

Selg turns out to be a weird and mildly worrying artist. The catalogue tells us he has cut himself off from society and lives in a wood, working as a traditional craftsman. The photograph of him on the Saatchi Gallery wall might have been taken by Leni Riefenstahl in the 1930s: high cheekbones, short back and sides, hooded eyes, a labourer’s shirt.

It isn’t just his appearance that Selg has borrowed from the past. Angelus, a beautiful image of a barren landscape at sunset, with a wheelbarrow in front of it, is a direct quotation from Millais. The big paintings of dusky native girls lurking in forests are an obvious borrowing from Gauguin. A nude and cowering Eve is a Heckel woodcut enlarged into the third dimension. And the bits of rustic wooden furniture on show here — the buttock-hurting benches and coccyx-crunching chairs — could have been knocked up by any muscular Amish with an axe.

Some will find Selg scary, but my suspicion is that he is best understood as a soppy German nostalgist who wishes the 20th century had never happened. His constant sampling would not have been possible before the advent of the Google age. And the sense of spiritual nervousness that is omnipresent in the various bits of hisGesamtkunstwerk makes him modern, too. No original German expressionist would have been as conflicted as this — a couple of big wars needed to happen first.

It’s a provocative beginning, on which the exhibition builds interestingly. Nobody else in the show seeks quite as obviously as Selg to memorialise their Teutonic despair, but most of Gesamt­kunstwerk’s artists turn to a predecessor for guidance. Indeed, the fact that they know a bit of art history and have read some books is one of the simplest ways to recognise them as German artists. You won’t find anyone in the Bloomberg New Contemporaries show at the ICA — a dismal gathering of recent graduates from British art schools — displaying this much tortuous knowledge of the past.

Dada and surrealism are the main influences on the painting twins Gert and Uwe Tobias. In a spectacular wall-length mural, the Tobias brothers marry the folksy innocence of early Miro with a spooky awareness that all dolls are sinister, which you also find in Picabia or Hans Bellmer. Upstairs at the Saatchi, Friedrich Kunath searches for a similar betrayal of innocence with a bashed-together self-portrait as a clown.

Thomas Kiesewetter’s coloured metal sculptures are clearly descended from the great Caro assemblages of the 1960s, and a particularly lovely blue sculpture of his declares in its title that it should be seen as a homage to Matisse’s paper cutouts. Felix Gmelin’s reworking of Guernica namechecks Picasso in the same explicit way. This exhibition-wide referencing of the classic moments in modern art by young German artists adds up to a rejection of the digital/photographic/video aesthetic that still dominates contemporary art elsewhere. The New Contemporaries show at the ICA, for instance, is enslaved by it. If this really is the latest direction of German art, then we must all shout “Hurrah”. The greater probability, alas, is that what we are applauding is Charles Saatchi’s taste, rather than German aesthetics per se.

Ever since he made his debut as a collector in the 1980s, Saatchi has had a penchant for big, messy slabs of action painting, and André Butzer’s particularly frantic canvases, covered with grinning comic-book faces and thick helpings of runny pigment, look like the sides of those pimped-up ­hip-hop trains that used to roar through New York’s underground before Mayor Giuliani began displaying zero tolerance to graffiti. This is not the only moment in the show that brings to mind the 1980s. Josephine Meckseper, who lives in New York, and whose work I remember from a pre­vious Saatchi survey devoted, on that occasion, to new American art, shows off an assortment of bras and stockings, displayed in glamorous glass vitrines of the sort Jeff Koons used to favour. The difference being that Meckseper is trying to attack slick and sexist consumer culture, while Koons was rather fond of it.

In the case of Georg Herold, not only does he feel like a 1980s artist, he most certainly was one. Before that, he was a 1970s artist. And, before that, a 1960s one. Born in 1947, of the same generation as Sigmar Polke and Martin Kippenberger, he rewinds the years with a lively pair of Day-Glo Giacometti figures attempting leggy yoga poses on the floor.

The show also features several artists who could happily have slotted into the New Neurotic Realism exhibition of 1998, Saatchi’s disastrous attempt to start an art movement. Nothing united the new neurotic realists except the recurring suspicion that their art was made from crummy materials found in nearby skips. It’s an aesthetic position mimicked here by Ida Ekblad, who embeds pieces of junk in concrete. And by Alexandra Bircken, whose intriguing metal frames present slices and slivers of rubbishy objects — hanging apple cores, painted stones — carefully displayed for our investigation, like giant slides to be studied under a microscope in a biology lab.

All the artists I have mentioned are worth a look, in what is eventually a fine and consistent show. Certainly the best Saatchi survey since New Art from the Middle East in 2009.