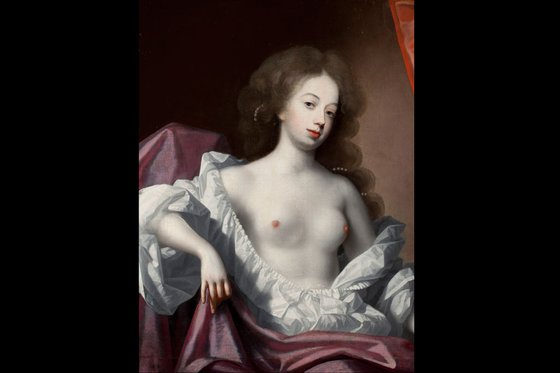 Breasts. Actresses. Actresses and breasts. If a lesser institution than the National Portrait Gallery had mounted an investigation of British art’s historical interest in actresses, then this review could probably stop here. You would already have all the information you need to form a picture of the show and the artistic mind-set it illuminates.

Fortunately for the forces of civilisation, the NPG is not a lesser institution. Indeed, it can currently claim to be one of our most active and pertinent museums.

Its new survey seeks, therefore, to challenge various preconceptions about this depiction of actresses. Nobody will leave the display imagining that British art’s fascination with the goddesses of the stage is purely a question of breasts. Legs, too, are important. As is hair. Eyes, as well. Most important of all, it seems, is reputation. The more lovers an actress has, the more scurrilous are the rumours circulating about her private life, the more chance there is of British art taking an interest in her.

Actresses were the first coherent group of women in Britain to achieve independent fame. Before their coming, you needed to be a queen or a saint or a witch for anyone to have heard of you. All that changed after 1660, when the restored king, the fun-loving Charles II, set about cheering up his people by reopening the theatres and unleashing Nell Gwyn on the populace.

The show opens with a pert selection of portrayals of this remarkable woman: surely one of the most remarkable and influential British women of all time. The first time you encounter her, looking out from an elegant oval painted by Simon Verelst in about 1680, you can’t actually see Nell’s breasts. Their presence is implied sexily by the pink glow of a nipple poking up above her neckline. Nell, the show’s increasingly excitable catalogue writer spells out, is “experiencing the sort of wardrobe malfunction that models call a ‘nipple slip’, preventable today by double-sided lingerie tape”. By the next picture, again painted by the sly Verelst, she is fully topless and displaying her assets with the sort of dramatic frontal frankness that Jesuses aspire to in crucifixions. Nell’s breasts have become her chief identifying feature.

The NPG’s catalogue writer calls her “the single most important prototype for the culture of charismatic celebrity in which we now live”. The spectacular amount of fame she acquired for herself and her profession still gives her significant name recognition today. Back in the 17th century, when the playhouses of Covent Garden and Drury Lane were the ITVs and Odeons of their times, she was momentously, startlingly, volcanically famous. Imagine an amalgam of Princess Di, Jordan and Mother Teresa.

It wasn’t just her breasts. Her story was an archetypal ascent from rags to riches. The daughter of an alcoholic procuress from Covent Garden, she was selling oranges in the street when she was discovered by the actor Charles Hart, who took her as his mistress. Aged 14, she made her stage debut at the Theatre Royal in 1664. Her acting career lasted just seven years. First Lord Buckhurst took her as his mistress, then Charles II. In 1671, at the age of 21, she retired from the stage and set about bearing the king’s bastards and becoming the darling of the people.

It is worth noting here that, during this absurdly brief acting career, the plague broke out, quickly followed by the Great Fire of London. The first killed 20% of the population; the second destroyed 70,000 of the city’s 80,000 homes. Neither succeeded in reducing Nell Gwyn’s impact.

Strangely, but also tellingly, she remains difficult to identify. Her face is curiously unspecific.

If you saw her in a crowd, I doubt you’d recognise her. Her breasts, however, are unmistakable. The topless portrayal included here was actually covered up by a more censorious age and only recently revealed by a modern restoration. Pretty much every unknown topless woman in art has been called “Nell Gwyn” at some point in her history.

The show ahead introduces us to the fine cast of British Nells who followed. None managed to achieve her level of mythic fame, but most were luckier with the artists they inspired. Mary “Moll” Davis, whom the randy Charles II also bedded, is shown seductively strumming a guitar and allowing her satin robe to slip down her shoulder in a wonderfully sensuous portrayal by Peter Lely.

The show’s most accomplished portrait is surely Reynolds’s likeness of Frances Abington as Miss Prue in Love for Love. Straddling her Chippendale chair in an 18th-century approximation of the Christine Keeler pose, she gazes past us into the distance and allows her thumb to tickle her lips with a smouldering knowingness Lauren Bacall might envy. Also notable is Gainsborough’s delightful Elizabeth Linley, sitting by a tree stump, oozing desirable rural fragility.

Yet this is a display filled more generously with outstanding life stories than with outstanding art. Linley married the playwright Richard Sheridan, who promptly forced her to retire from the stage. Lavinia Fenton became the mistress of the Duke of Bolton; Mary Robinson of the Prince of Wales; Elizabeth Farren of Lord Derby. It’s a story repeated here with the stubbornness of a damaged CD: beautiful young actress, almost always from Ireland, for some inexplicable reason, turns the head of Lord Such-and-such, who makes her his mistress and demands her retirement.

Clearly, watching actresses in the dark unleashed forces powerful enough to reverse centuries of British social behaviour. The reason why Dorothy Jordan became so popular, and why “Jordan mania” gripped 18th-century London in her wake, was that her fondness for “breeches roles” allowed her shapely legs to be seen and drive dukes mad. The Duke of Clarence, who became William IV, was so taken by her cross-dressing, he fathered 10 of her children.

This is not a show that seeks to examine the psychological thrustings that triggered this frantic class-hopping and lordly pleasure-seeking. But a display that strides sure-footedly and entertainingly through the birth of the celebrity age hints also at a story line lurking beneath — something darker, deeper and even more telling.