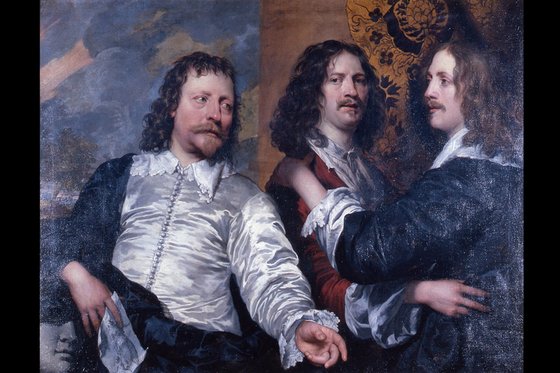 This is an open letter to Prince William. And to Kate, because she also studied art history at St Andrews, and presumably has a feel for these things. But mostly it’s to William, because, when he was a student, he wrote an essay about the portrayal of Charles I by van Dyck, so he must be interested in these matters. And is now in a position to do something about them.

What does a native genius have to do in Britain to get noticed? Or let’s be even blunter about this. Why is the superb royal portraitist William Dobson, court painter to Charles I, hero of the English civil war, so scandalously forgotten?

I believe Dobson to have been the first great British artist: the first truly talented native painter. That was in the 17th century. Today, however, his national visibility is close to zero. Which is ridiculous. Because, as far as I can see, there is nothing — absolutely nothing — about Dobson’s life or talent that ought ever to have stopped us from plastering his face across our stamps or hoisting up his likeness, in statue form, in front of the Houses of Parliament.

Dobson was the first great British artist because he painted the first pictures in the story of British art that feel unmistakably from here. No Frenchman would have painted like him, let alone an Italian. There is something so tangibly honest about his portraiture. Almost a century before Hogarth, Dobson was already Hogarthian: blunt, beefy and foursquare.

What’s more, as far as British history goes, his dates, 1611-46, could hardly have been more significant — as you of all people must know, Your Royal Highness. And you too, Kate, because I imagine you spend some of your time nuzzling the royal neck and feel grateful for its wholeness. By being born in the reign of James I, Dobson was born to witness the Union of the Crowns, a key step towards the creation of Great Britain. Which is a superbly positive birth, for sure. But by living through the civil war, by becoming Charles I’s court painter, by following the king into exile in Oxford, Dobson also witnessed one of the most tumultuous stretches of British history, an epoch that ended with that beheading.

All this is, of course, tragic to remember. Particularly for you, Sir. But, putting aside the personals for a moment, wasn’t it actually splendid that those devious so-and-sos, the Fates, managed to ensure that at exactly this extreme moment of national history, a British painter appeared who was talented enough to capture this whole huge moment for posterity? When the Fates gave us Dobson, they gave us not only a great native talent, but a great native opportunity for that talent to express itself.

I also like the way van Dyck, the artist in whom you specialised at St Andrews, Sir, Dobson’s predecessor as the king’s painter, was shovelled brusquely out of the way at exactly the right moment to make room for Dobson. Van Dyck died in 1641. The civil war broke out in 1642. So the Fates were being ruthless, yes. But how perfectly they set up everything for the advent of a native genius.

Some say Dobson was actually van Dyck’s pupil. If he was, then, gadzooks, how different they were. Where van Dyck, who was from Flanders, was always guilty of outrageous flattery, Dobson, who was from London, couldn’t do it. When someone sat for van Dyck, they invariably ended up looking thinner, taller, more elegant than they were. Van Dyck was, as you know, perhaps the greatest improver-upon-nature that royal portraiture has ever seen. Look, for instance, at what he did to Charles I’s queen, the much-hated French Catholic Henrietta Maria. According to the Venetian ambassador, Henrietta was small and mousy, with front teeth that stuck out “like the guns on a ship”. But when van Dyck painted her, he turned her into one of the most delicate beauties of the age. Witness those exquisite portraits of her that now hang in Windsor Castle, which you must know so well. What beautiful lies they tell.

Dobson did the opposite. When he painted you, he put a stone on you. Or even two. When he painted his own wife in that busty portrait of her in Tate Britain, he turned her into a proudly thrusting Barbara Windsor. She is the first buxom wench in British art, and I’d buy cockles from her any day.

Look, too, at his portrait of Endymion Porter, the king’s most trusted Oxford courtier, which is also at Tate Britain. Van Dyck painted Porter as well, and made him appear so damn suave, every inch the oily royal apparatchik. But with Dobson, we get a portly, red-faced country squire instead. Same man, completely different presence. Van Dyck’s is unquestionably the more elegant image. Dobson’s is unquestionably the more truthful.

Recently, after lots and lots of homework, I finally managed to identify the two men who appear in another weighty Dobson portrait, which hangs in the Courtauld Institute and had previously been known as An Old and a Younger Man. It turns out they are two poets who travelled to Oxford to support the king. The younger one is Sir John Denham, a gentleman poet who wrote the first topographic ode about the River Thames. But it’s the old man who is the giveaway: the one with the big nose, the puffy face and the beer-loving eyes. He’s John Taylor, the so-called water poet, a former boatman turned scribbler who used to row Shakespeare across the Thames. You can tell immediately that Dobson painted him because of all that obvious humanity coursing through his podgy face.

Dobson also painted the most tragic and poignant of all the portraits of Charles I before his beheading. It is currently the focus of a display at Windsor Castle, so I imagine you know it well already, Your Royal Highness. I presume you’ve been walking past it since you were a princeling. It’s just a head and shoulders, painted towards the end of the king’s exile in Oxford, when things were going badly for the cavaliers. For Dobson, too, the paint was now running out. All he had left was a few browns and some greys. In this great, sad portrait, the king is still trying to look bellicose in his thin, grey armour, but his eyes are the most hopeless I have encountered in a royal portrait. Talk about looking beaten. One of the reasons they cut off Charles’s head was his unshakable insistence upon the divine right of kings. Yet nowhere in art will you find a more obviously human monarch.

If extreme honesty were Dobson’s only talent, however, I don’t think I’d be raving about him here. The fact is, he could also do dashing. Brilliantly. Not only did he paint the saddest king in British art, he gave us some of the bravest warriors. When you slog through books of British history, and you reach the Cromwell years, all those cocky cavaliers smirking back at you from the illustrations are Dobson’s handiwork.

Go and look, for instance, at the Royalist Sea Officer hanging in Greenwich Maritime Museum: the one in the spectacularly pink silk doublet. Nobody knows who he was. Everyone can see immediately what he was like. Brave. Committed. Loyal. Nonchalant.

As if all this exciting painterly talent were not enough, the icing on the cake is that Dobson managed also to have a ridiculously dramatic life. And a cruelly short one. His entire career would fit into a small suitcase. It began in 1642, when he joined the king in Oxford, and ended just four years later, when he returned to London, aged 35, and promptly died. A drunkard, they say, loose-living and broke. Damn it, he was even extremely handsome, as you will find if you travel to Alnwick Castle, in Northumberland, to see the magnificent self-portrait he painted, hugging two of his best Oxford friends. I think it’s the finest self-portrait in British art.

How can a career as fascinating as this have got itself so thoroughly forgotten? It’s truly baffling. Imagine walking into the room with the elephant in it — and not seeing the elephant. Now, I’m just a mouthy Polish immigrant, so none of this is really my business. It ought really to be yours, Your Royal Highness. But perhaps, as a foreigner, I can see, on this occasion, what the natives seem to be missing. Which is that William Dobson is up there with the giants of British art, up there with Hogarth, Constable and Turner.

Since this year is his 400th birthday, and since we really ought to be making more of a fuss about him than we are, not only have I made a film about Dobson (which I hope you will watch on BBC4, because your uncle, Earl Spencer, a big Dobson fan, appears in it), I have set up a website devoted to him. There you will find a handy map of all the museums currently featuring Dobson’s work, and various lumps of useful information about his sitters.

Thank you for reading this heartfelt epistle, Your Royal Highness. And you too, Kate. We art historians need to stick together.