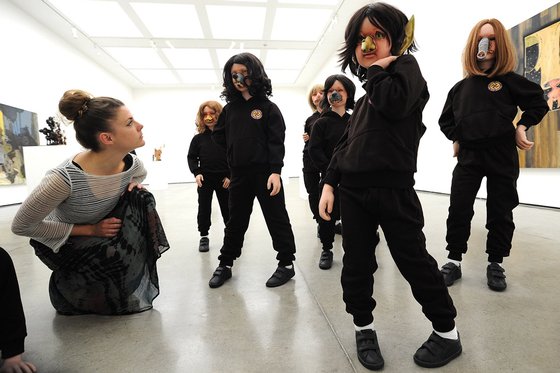 What is actually happening is that Jake and Dinos — hard-core, trouble-making, Britpop subversives, who refuse to grow out of their naughty-schoolboy phase and who always set out to flimflam their viewers — are currently pretending to be putting on two solo shows instead of their usual joint effort. In this pretence, we are asked to believe that one of the Chapmans is responsible for the display packed with Nazis at the Mason’s Yard branch of the White Cube gallery, while the other Chapman is responsible for all the Jesuses rounded up for torturing at White Cube’s Hoxton branch. Two separate shows. One shared identity. Who did what?

The joint effort is actually entitled Jake or Dinos Chapman, and the idea is, I suppose, to make things extra-confusing for us by adding a further layer of obtuseness to what is already a determinedly obtuse setup. Actually, it turns out to be an effective way of forcing us to voyage across modern London, not just from one branch of the White Cube to another, but from one posh reality to the next; from old posh to new posh; from Mayfair to Hoxton.

However, anyone walking into either show who knows anything at all about the Chapman brothers’ recurrent obsessions will see immediately that nothing much seems to have changed. We get the Nazis. We get defaced old masters and pretend African sculptures. Disney cartoons are once again accused of peddling a phoney innocence. Only the McDonald’s corporation seems to have been spared its usual battering. Otherwise, what happens here is what always happens at a Chapmans show: two hard-core society-mockers, who violently mistrust the values and tastes of the world they live in, are having a joint giggle at the rest of us for going along with it all. The entire are-we-working-together-or-aren’t-we? presentation is just a typical bit of Chapman kidology.

Since the brothers have set out to get us thinking about dualities and match-ups, I suppose we had better humour them for a moment and ask why artists ever work together at all? Few activities embarked upon by humans are as purely egotistical as being an artist. The task seems to consist chiefly of expressing yourself while listening to the radio. So why dilute the egotistical rewards by working interchangeably with someone else?

The answer, I suppose, varies from couple to couple. In the case of John and Yoko, who invented the two-as-one approach and should be credited more clearly with that invention, it was love that united them. John and Yoko really believed they could change the world together. The dreaded Gilbert & George, who followed them, had no such pleasing hopes. Their double act, you feel, was inspired by a belated music-hall ambition to reincarnate Flanagan and Allen. Or was it Morecambe and Wise?

More recently, assorted real-life couples — Marina Abramovic and Ulay; Allora & Calzadilla — have worked together because they shared an aesthetic direction as well as a bedroom. But the Chapmans are genuinely different. As brothers born four years apart, which is a lot for brothers, they lead separate lives and seem, on the face of it, to have little in common. Their characters are different. Their tastes, too. As far as I can tell, only two things actually unite them. They both like to wind people up. And each needs the other artistically.

That much is made obvious, immediately, at the Mason’s Yard half of this event, where the upper gallery is packed with rows and rows of slipshod cardboard sculptures lifted onto a forest of pedestals. Abstract, dog-eared, tatty, they look like something Picasso might have knocked up if he didn’t have any talent and stumbled across a hoard of cardboard boxes. So alarmingly banal is this pseudo-modernist paper statuary that it positively shouts: I was made by Jake Chapman.

I say that because Jake is the nihilist of the two: the provoker, the ideas man. When a Chapman makes something that involves having no artistic talent, it will always be Jake who is guilty. Downstairs at Mason’s Yard, however, the brilliant defacement of a genuine Flemish crucifixion that you encounter in the dark is just as obviously the handiwork of Dinos Chapman. Because he is the one who paints like Hieronymus Bosch and whose skilful addition of monsters, ghouls and cartoon characters to the cast around the cross results in a heart-stopping moment of cultural transgression. Dinos has turned a real Brueghel into a fake Bosch. Ouch.

Over at White Cube, Hoxton, meanwhile, the entire upper gallery has been filled with deliberately sacrilegious pictures of Jesus and the saints. Instead of altars, the defaced pictures are hung above battered bits of living-room furniture. Instead of candlelight, dusty electric lamps attempt some divine illumination. It’s as if we have stumbled upon a private chapel created by a religious down-and-out.

The homeless altarpieces have again been created by painting over battered originals, acquired, I presume, in auctions and antiques shops. There’s the Virgin Mary, looking like a burn victim, with scabs and encrustations covering her face. There’s Guido Reni’s famously sorrowful head of Jesus, suffering, in this grim instance, from an added dose of warts and leprosy.

All this extra blemishing is so convincingly achieved, it must also be Dinos’s work. He’s the one who paints really well. My guess is that what actually happened here is that the brothers did some of the stuff in the show on their own. And some of it together, as usual. The bad paintings in the Disney style that fill the downstairs gallery at Hoxton look like Dinos again. But the nihilistic addition of an extremely lifelike group of Nazi schoolkids in swastika hoodies, gathered around the pictures like a class of innocents on a day trip, feels like a particularly wicked Jake moment.

Back at Mason’s Yard, the entire lower floor is given over to another pretend exhibition, in which dozens of full-sized Nazi mannequins in spectacularly sinister black uniforms wander about among giant black versions of the bad cubistic sculptures upstairs. The mock Nazis lean in for a better look. They inspect. They chat. And behave just as a crowd always does at a White Cube opening. I found all this a comic sight rather than a worrying one: typically British, Basil Fawlty art, that dares to mock where others fear to whisper. It refers, I think, to two notorious incidents in the story of modernism. One is the infamous roundup of degenerate art by the Nazis, when Picassos, Van Goghs and Matisses were held up to warn the German people of what art had become. The other is the often-told story about Picasso in Paris during the Nazi occupation, being visited by an art-loving German soldier. Noticing Guernica propped up in a corner of the studio, the visiting Nazi is supposed to have asked: “Did you do this?”

“No, you did,” replied Picasso.

Thus, what we really have here across the two White Cube venues is not Chapman v Chapman, but Jesus v the Nazis: a quintessentially subversive brotherly face-off that seeks to address a recurring truth about the banality of evil. The Nazis going round the sculpture show are supposed to be embodiments of ultimate evil. Yet here they are, behaving just like any arty crowd at any opening. Jesus, on the other hand, is supposed to represent redemption and goodness, yet the images we make of him — crucified, punctured, tortured, crowned with thorns, bleeding from every stigmatised orifice — are so sickeningly gory, they could be the handiwork of a Hollywood special-effects team. When we worship Jesus, we worship extreme violence.

I used to think I was imagining this serious intent in the output of the Chapmans. The two of them are so damn devious, they might just as well be taking the mickey all along. But I now have written proof to back up my theories. A book by Jake Chapman that accompanies the show — laughably described as “Jake’s third novel”, even though his writing is even worse than his painting — tells the story of a newspaper called The Someday Times that sends a female reporter, Chlamydia Love, to interview Jake in his new home in the Cotswolds about the rumours that he and Dinos have split up.

Chlamydia has been tasked with finding out if the rumours are true. During the interview, Jake makes a brutal pass at her: “Closing in, until mouth forcefully docks with hers, his and her lips are now one… his tongue is compelling, forceful.” When they finally disengage from this shocking docking, Chlamydia asks him about the Nazis. Why are they such an insistent presence in Chapman’s art? “Because who else better to pin the blame on than the Nazis, the transcendent baddies, evil ad infinitum. It’s their fault,” explains the fictitious Jake. “Always their fault, forever and ever, amen.”

I suspected as much. When in doubt, blame the most obvious evil.