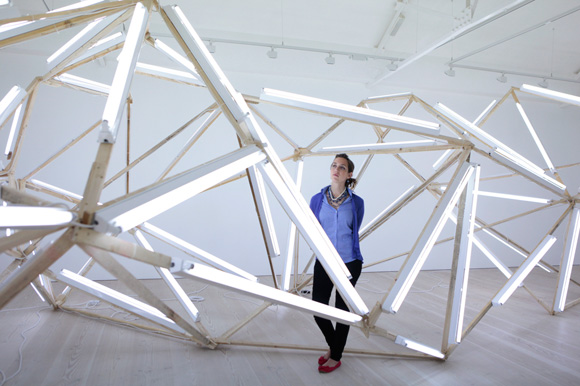 Included proudly in the press release for the new sculpture show at the Saatchi Gallery are the attendance figures here for the past two years. Frankly, they make for astonishing reading. In 2009, the two most visited exhibitions in London were Unveiled: New Art from the Middle East, and The Revolution Continues: China Today, both at the Saatchi. Both shows easily outnumbered Anish Kapoor at the Royal Academy, Rothko at Tate Modern and even the Picasso show at the National Gallery.

Last year’s figures are more remarkable still. In terms of visitor percentages, the most popular exhibition of all was The Real Van Gogh at the Royal Academy, but the next three shows in the list were all at the Saatchi. Newspeak: British Art Now, attracted 557,192 visitors, the tedious Indian Art Today managed 407,796, while Abstract America: New Painting and Sculpture — and this really is sensational — succeeded in luring 837,200 visitors to the Saatchi. The show was open a long time, from May to January, but those are still amazing numbers.

All of which prompts the question: why? How is it that a feeble display of highly derivative modern art from India can attract more visitors to the Saatchi than Monet and Corot can to the National Gallery? Or Byzantium to the Royal Academy? It obviously has nothing to do with the actual art. The Indian show was wrist-cuttingly, mind-fryingly, vein-freezingly awful. Even Abstract America could offer only a handful of works that compared favourably with the great American art that has graced Charles Saatchi’s walls in the past. It is certainly not the exhibits. So what is it? Trundling disconsolately around The Shape of Things to Come, the patchy new Saatchi survey of recent developments in international sculpture, I could sense the answer from the moment I stepped in.

Of course, it helps that the gallery is free. You can pop into the shops on the King’s Road. Then pop into the outdoor food market. Then pop into the Saatchi. Some readers of this column will want to understand what I am describing as a democratisation of art, an assault on the ivory tower. But it isn’t. This is gallery-going transformed into something closer to hanging around the mall.

These are cut-and-paste teenage aesthetics that were tired when Saatchi first celebrated them two decades ago in his disastrous unveiling of Neurotic Realism — a ludicrous attempt to launch a new “ism” on us. To see these same aesthetics unrolled again, blown up in size, with every last drop of grey matter sucked out of them, is a sight that the fragile among you should avoid at all costs. Vulnerable human spirits will stall and plunge like a stricken plane at the spectacle of these sad stuffs.

The show brings together work by 20 artists from Europe and America. Although it is supposed to celebrate exciting new developments in sculpture, it actually features several old-timers who have been around the block a few times. John Baldessari, who supplies the display with one of its better moments — a giant ear trumpet emerging from a huge ear, which plays bits of Beethoven to you when you talk to it — is in his seventies now, and won a lifetime-achievement gong at the 2009 Venice Biennale. I have been reviewing Baldessari exhibitions for three decades. They are usually worth the effort. But to describe his output as the shape of things to come is certainly pushing it.

Another of the better moments features blobby girlies moulded out of unfired clay by Rebecca Warren. Life-sized and dangerous, Warren’s bulging nudes stride towards you, nipples a-jiggle, with a hip-wobbling strut borrowed from the notorious cartoon heroines of Robert Crumb. Remember Angelfood McSpade? Or his giant-breasted Janis Joplin lookalikes?

Warren enlarges Crumb’s outrageous cartoon females into boisterous, rumpy-pumpy sculptures that you feel would take your eye out if you accidentally got in the way of a swinging breast.

Remember, unfired clay was the material out of which God made Eve. The sexualisation of the female image is certainly the topic under discussion here.

If Crumb is Warren’s chief bête noire, another is the irredeemably macho Rodin, who also preferred his women in bouncy bits. But these vigorous figures date from 2003. Back in 2006, Warren was nominated for the Turner prize, and should probably have won it. I don’t want to come across as a Louis Walsh here, but how does this work constitute the shape of things to come?

As you enter the show, the first sight to greet you is a Kris Martin installation that seems to consist of eight huge slabs of rock brought in from a quarry. Only when you look closely do you notice the tiny crosses on all of the summits. In the paintings of the German Romantics, notably Caspar David Friedrich, tiny crosses on big mountains represented the struggle of the human soul against the mighty forces of nature. In Martin’s work, they prove that he has been on holiday to Spain. Or is that Austria?

One of these fake shrines might have been effective. Eight of them, arranged interchangeably, add up to a lack of ideas.

By now, we all know full well what a Charles Saatchi show will contain. The appalling Altmejd, from Canada, supplies the obligatory graceless porn. Martin Honert, from Düsseldorf, whom I remember encountering in a Saatchi show called Young German Artists 2 back in 1997, gives us the hyperrealist human figures, in this case a pair of bearded lumberjacks, 9ft tall. The messy electronic sculpture, with flashing bits, is presented by David Batchelor, who gives us shelving units stacked with light boxes. And the slabs of caveman primitivism that feature in all Saatchi displays this time come courtesy of the scandalously overrated Thomas Houseago, who makes blobby humanoid torsos out of plaster and Tuf Cal.

The Saatchi staple I always dislike the most — the big, punky blobs of fibreglass, splattered with Day-Glo graffiti colours — is the shared achievement here of Altmejd, Ruby and Folkert de Jong, from Amsterdam. Actually, de Jong deserves a better context. His work may be made of pigmented polyurethane foam and coloured like the inside of a fifth former’s pencil box, but it has genuine vitality. The Dance features a set of five life-sized figures dressed in 17th-century Dutch costumes, who twirl macabrely around the gallery with their arms outstretched in a mad dervish conga. Or, rather, with their pink Styrofoam planks outstretched, because, having realistically modelled the rest of the figure, de Jong gives his dancers creepy plank arms that jut out sideways like the wings of the Angel of the North. The 120bpm rhythms of an Amsterdam disco have been visited upon the good burghers of the 17th-century city.

The only other worthwhile artist in the show is David Thorpe, who borrows looks and styles from faraway cultures — the Islamic world; the mughal palaces of India — to create mysterious new-age objects that feel simultaneously modern and ancient. One of Thorpe’s exhibits here is a glowing white cube decorated with flower patterns that try to evoke the spirit of the Taj Mahal. The big wall of tiles alongside, meanwhile, feels like a transported slab of Istanbul.

There is something genuinely mysterious about Thorpe’s work. Something unknowable. That cannot be said of much else in this very familiar-feeling display of new work.