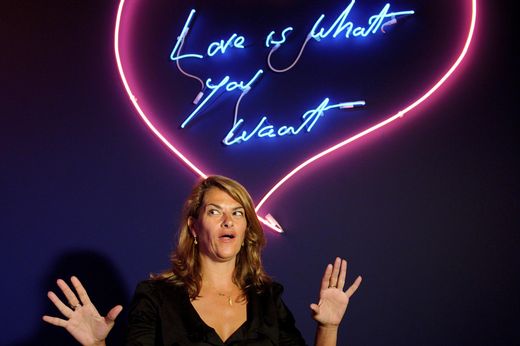 Tracey Emin has a show at the Hayward Gallery. So the rest of us — the nation at large; you, me, all of us — ought now to rise from our seats and collectively exclaim the exclamation that the situation demands. Together, we need to shout: “It’s about time!” Because the avoidance of the Brit Art generation by our big public galleries — the Tate, the Hayward, the Whitechapel — since that generation emerged two decades ago is little short of scandalous.

To this day, Damien Hirst has not had a suitably ambitious survey of his work at a British public gallery. Yes, the Tate has lined him up for an exhibition during next year’s Olympics, but that feels like an act of international showbiz, not art appreciation. Marc Quinn and Sam Taylor-Wood have been ignored for a decade. As for the best and feistiest of them all, the Chapman brothers, they had a show at the satellite Tate in Liverpool five years ago, but nothing at the mothership: their untameable anarchic genius remains uncelebrated by Tate Modern.

Why? Because the British art establishment is run by swankpots who don’t like Hirst, the Chapmans, Quinn and Emin, for the same sorts of reasons they don’t go shopping at Morrisons. These are Waitrose people: they eat smoked salmon, not kippers. In their art tastes they would rather be bored into somnambulance by a rigorous German post-conceptualist than excited into angry emotionalism by a problematic Chapman sculpture or stirred into dark sexual imaginings by the nude confessions of mad Tracey from Margate. Three hundred years ago, the British art establishment could not stomach Hogarth. Today, it cannot handle Tracey Emin.

The assault on propriety begins dramatically and superbly with an opening gallery in which a rickety seaside pier — full-sized and falling over — has been surrounded by a selection of angry agitprop quilts, hung around the wall in a double row to form an accusatory clerestory. The wooden pier is a transported slab of seaside nostalgia, a quick-fix sculptural return to Emin’s childhood in Margate. But the quilts are a finer invention.

Taking a traditional feminine art form that is usually so gentle and polite — the home-made bed-cover, assembled out of handy domestic rags by a dutiful stay-at-home wife — Emin has turned the appliquéed blanket into a locus for extreme displays of womanly angst.

Her first quilt, sewn in 1993 and called Hotel International, after the establishment in Margate her errant father ran, is already typical: an attention-seeking collage of misspelt soundbites and extreme autobiography, sprinkled with romantic dreams and naughty words. You’re Good in Bed, it says in the middle. Hotel International: The Perfect Place to Grow, it reads, sarcastically, along the bottom. An angry little girl, betrayed by her carers, is taking a pop at her dad for not being there when he should have been; and summarising her fractured sense of self; and extracting her revenge on the blokes who used her in Margate. That is a lot of content for a single hanging.

As this is a family newspaper, I am unable to repeat most of what is written on the rest of Emin’s brash home-made noticeboards. Terrifyingly needy in some corners, terrifyingly explicit in others, her quilts work because they successfully subvert the traditional innocence of their origins and because their format forces Emin to come up with soundbites, rather than essays. For much the same reason, her neon signs are also effective. A special black gallery has been filled with them, and, as you pass among the dis­embodied words glowing beautifully in the dark, the best of the punk maxims seem to sneak off the walls and whisper in your ear. Neon signs usually broadcast a hard and clear message — which is why sex shops have them hanging outside at night — but a Tracey Emin neon sign will go in the opposite direction, presenting cryptic poetry or elusive wordplay. “I Said Don’t Practise on Me,” reads a pink sign. “I Know, I Know, I Know,” says an orange one, with the central “I Know” crossed out.

Modern art has a taste for cool conceptual wordplay that plops into your consciousness and spreads out in ripples. Emin’s contributions to the genre, the neon reworkings of her handwriting, manage to feel thoroughly uncool: visceral and emotional.

The show ahead jumps happily from medium to medium: photographs, sculpture, assemblages, diaries. Why I Never Became a Dancer is an early video piece that tells of the teenage Tracey’s desperate desire to be a disco dancer. Entering a local competition in Margate, she was on the point of winning her round when a chant started up in the audience among the local boys. “Slag, slag, slag,” they shouted in unison. Her feet turned to concrete. Her dancing career was over. So she became an artist instead. The video ends with a triumphant Tracey, grinning, swirling, jiving and dedicating her happy dance to all the boys who taunted her — all the boys she had slept with.

Up to this point, the show seems to me to be getting everything exactly right. We are in the presence of a brand-new voice in British creativity: a mouthy, angry, cheeky, combative urban female, the sort you might easily encounter working the tills at Tesco, but who, until now, has never been allowed into the Parnassus of art. This is Barbara Windsor playing Cordelia, or Diana Dors as Portia: a feisty, naughty, lippy and, yes, thoroughly immature outpouring of artistic narcissism by the sort of flaying female mind that is more usually found in A&E waiting rooms than in galleries. And that is the point. That is why Emin is important. The raw materials that go into her art have never gone into art before.

So far, so good. Emin is at her best when her obsession with herself has an emblematic largeness to it, and seems to encompass the whole of her gender and class — when she is battling on all fronts to be heard. She is at her worst when the sexy psychodramas have achieved their objective and everybody in the country knows her. The second half of the show — the art produced in the past decade or so — feels as if it is set in a luxurious bubble bath.

Part of the impression made here of a career going pink and soft is caused by the architecture of the Hayward itself. The opening galleries are dark, lofty and self-contained, while the final ones are pale, low and sprawling. The careful separation of Emin’s early output into smaller chunks gives the beginning of the journey plenty of light and shade, whereas the final sprawl of memorabilia and videos, sculpture and drawing, has none.

The work, too, gets progressively smaller, paler, softer and less interesting. By the time we reach the ridiculously fluffy portrayals of her pet cat, the Emin retrospective has changed materials from Margate rock to Andrex tissue. Boadicea has turned into Hello Kitty.