A fabulously unique show that will have you squirming 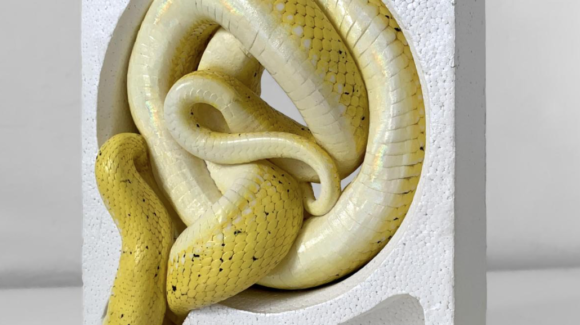 Polly Morgan has a new show. It’s her first solo display since 2012. And — brace yourselves — it’s got taxidermy in it. Dead snakes. Dead hedgehogs.

Further down the page I will be showering praise on Morgan’s exquisite manipulation of expired beasties, but as I’m not the kind of art critic who avoids the rapids when I’m kayaking, let’s start with the difficult stuff. Taxidermy is problematic. I know it. You know it.

In the Victorian world, where so many of Britain’s cultural norms made their debut, extinguishing wildlife was the done thing. You went to the colonies. You shot the bejesus out of anything that flew, ran, swung or slithered. And you stuffed it. Then you put it on your mantelpiece, where its task was to connect you with the paradisiacal past you lost when you stopped hunting and gathering and started shovelling coal into the furnaces of Bolton. We paved paradise. We put up a parking lot. The excitements of taxidermy lead all the way back to the Garden of Eden. 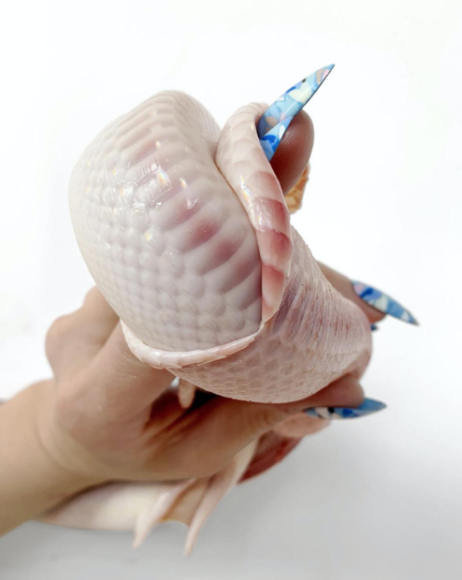 These days, of course, we need to stay mum about that. Declare yourself to be a taxidermy enthusiast and David Attenborough will be round to bash down the door while Extinction Rebellion set fire to the house. Today taxidermy is a cultural no-no. Except in the world of art.

Long before Damien Hirst stuffed his first shark, the symbolic manipulation of animal parts played a recurring role in the contortions of modernism. In the 1930s the surrealist Meret Oppenheim turned a teacup into something creepy by wrapping it in the fur of a gazelle. In the 1960s Joseph Beuys locked himself in a room with a stuffed hare and involved it in a noisy lament on Germany’s lost past. In the 1980s Denis Masi used screaming monkeys as pitch-perfect stand-ins for us.

In all these instances, the task handed to the preserved beasts was to remind us of our origins; to speak to the animal within. And in her small but perfectly formed display How to Behave at Home at a tiny gallery called the Bomb Factory (it’s just off the Holloway Road in north London, open Thursday to Sunday), Morgan continues these unsettling explorations.

What hits you first is the immaculate presentation; the immediate evidence of an OCD mind. Precise sculptures on plinths. Precise pictures on walls. The work may consist chiefly of dead animals, but its moods are pure, angelic, strikingly white.

Of the nine sculptures in the show, eight are not much bigger than a clock on a Victorian mantelpiece. Only one, the most brooding, is significantly larger, roughly the size of a gravestone. It sits on the floor as you come in, barring the way to the prettiness beyond, a slab of concrete with a snake in the middle. The snake is something big, a python or an anaconda, one of those deadly stranglers that squeeze the life out of you, except in this case he’s the one who is trapped.

The display ahead makes recurrent use of this same conceptual strategy. A curled-up yellow snake is trapped in ugly polystyrene packing. A spotty brown snake has been twisted into a question mark. A slither of multicoloured snake is briefly visible in a cracked block of yellow sandstone, like one of those gorgeous expanses of amethyst you find inside a lumpy geode.

So the snakes are imprisoned inside unpleasant expanses of packing material — polystyrene infill, concrete castings — but this heavy boxing can’t contain them; they keep bulging out and struggling. In her writings for the show, Morgan describes her artistic ambition as an effort to “whack-a-mole”; a hopeless attempt to contain something that keeps popping out. The snaky twists and knots are insistently intestinal. The sculptures may not look like us, but the relationship they record between squelchy insides and shiny outsides is our preferred relationship as well.

Also in the show is a set of creepy photo-works in which a female hand can be seen peeling the skin off a dead snake to reveal the gory flesh below. The peeling hand sports brightly painted fake nails of the kind you get expensively done on the high street. The Beyoncé nails turn the hands into talons. They’re entirely inappropriate for the job, but it’s very us to get them done that way.

The same message, then, on repeat: outsides say one thing, insides say another. Morgan points a finger at the Instagram age, at the urge to manipulate appearances and to hide the truth behind manufactured veneers. The truth won’t behave, is her point. The snakes won’t stop wriggling. 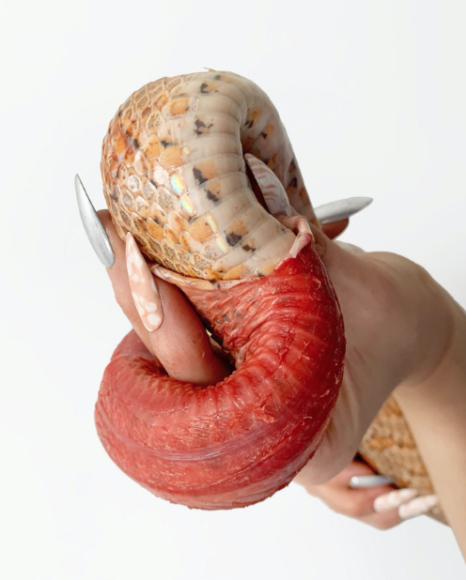 All this feels strikingly independent. The art reminds you of no one else. Hirst was macho, Morgan isn’t. The masculine territory of taxidermy has been commandeered by feminine intricacies and complex moods. Emotionally, in the atmospheres she creates, she’s nimble and light to the touch. Her art may consist largely of dead animals, but there’s no sense of death about it. Snakes have had a bad press ever since Genesis, but here they are presented as something elusive, beautiful, magical. As are the bits of hedgehog that make a couple of brief appearances and add textural variety to these slinky proceedings.

In the end, her art says something genuinely insightful about the modern world. She turns snakes into mirrors and holds them up to us. To do this with taxidermy is brave and special.

At the Royal Academy, the annual Summer Exhibition has finally arrived, rebranded as a Winter Exhibition. Having had to battle my way through this ghastly event on so many occasions, it gives me genuine pleasure to be able to report that this year’s effort is perhaps the best I’ve seen.

The problems are the usual ones — too much stuff, with too little focus, trying to survive in a stylistic mess — but for once the selected art seems mostly to have originated on the same planet as contemporary aesthetics. This is particularly true of the opening stretch, selected by Isaac Julien and devoted exclusively to black art.

This show within a show has some real high spots. The compelling Njideka Akunyili Crosby, in front of whose work I will always stop, has an extra-large figure piece in which a black woman cradles the head of a white man. Sonia Boyce, who is going to represent Britain at the next Venice Biennale, plucks catchy patterns out of the ether and combines them with haunting African faces. The exciting Zanele Muholi displays one of those towering self-portraits in which the masculine blurs seamlessly with the feminine.

All that is good. What isn’t good is the pricing of some of the art. Frankly, it’s obscene. Frank Bowling’s scrubby abstracted Watermelon Bight is on sale for £756,000! At the other end of the show, Ron Arad’s Oh Lord, Won’t You Buy Me? is yours for £324,000! The only people who can afford those prices are Russian oligarchs and Florida hedge-funders. What is the point of making art for them?