A forgotten star of the rococo has been given his due in Edinburgh. Doff your fancy hats to Monsieur Liotard 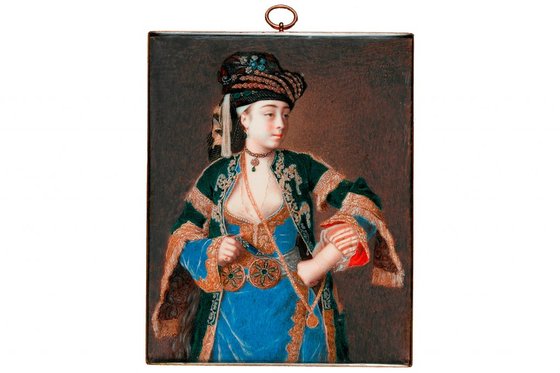 Art may not be a bottomless pit, but it is a pit that is deep and wide. A pit in which it’s easy to lose people. The artists we hear about are those who fit into one of the meta-narratives, the big storylines that art historians were put on earth to write. They fit the bill. They’ve been selected. Other artists, the ones who don’t fit the bill and aren’t selected, we don’t hear about. Jean-Etienne Liotard is one of those.

But before we get to Liotard, although still on the subject of meta-narratives, I’ve noticed that the hangers-on who write these big storylines — curators, art historians — invariably go for the most weighty plot they can imagine. I suppose they are trying to legitimise their own positions by appearing to speak on the side of a conspicuous and proper seriousness. Art, of course, doesn’t work that way. Art doesn’t need to keep proving how weighty it is, or how serious. Art just is. Which brings us, again, to Jean-Etienne Liotard (1702-89).

It’s a wrong now being righted at the Scottish National Gallery in Edinburgh, where a pleasing look back at Liotard’s career plunges us immediately into unfamiliar artistic territory by confronting us with a grinning loony, sporting long grey hair and a Tommy Cooper fez, who is pointing extravagantly out of the picture at nothing. Blimey. Is this grinning long-hair Liotard? Yup.

Born in Geneva to French Huguenot parents, Liotard was given restlessness as his inheritance. Travelling from European court to European court; painting mostly portraits, but also still lifes; swapping mediums busily from oil paints to pastels, from watercolour to enamels, he’s one of those slippery, interstitial jellies whose identity seems never to have set. In his own times he was known chiefly for his portraits in pastel, which are especially exquisite. These days, we tend to think of pastel as a broad and fuzzy medium. Degas’s floaty dancers spring immediately to mind, or Redon’s psychedelic bouquets.

Liotard used pastels differently, however. Liotard used them to achieve effects of intense realism. I had to look very carefully indeed at his portrait of Princess Elizabeth Caroline, granddaughter of George II, to prove to myself that it wasn’t an oil painting. Her skin textures, her eye colour, the verisimilitude of her lacy top, are nothing short of astonishing. Nearby, George Prince of Wales, the future George III, is, meanwhile, a dead ringer for the teenage Boris Becker.

A key reason this show has fetched up in Scotland is, I suggest, the presence in it of two beautiful Jacobite miniatures of the sons of the Old Pretender, James Stuart. One shows Prince Henry Benedict Stuart, and the other his older brother, Charles, aka the Young Pretender, aka Bonnie Prince Charlie. These Stuart miniatures were painted in Rome, another of Liotard’s many stopping-off points in his ceaseless roaming. Just a few inches tall, they were intended for an international distribution that would keep the Jacobite cause in the public eye. Their scale leaves little room for expression. Yet even here, working with watercolour, Liotard finds some sharp stabs of reality in Bonnie Prince Charlie’s impressively firm gaze.

These British pictures form such an impressive group that I am at a loss to understand how Liotard has been kept out so successfully from the meta-narrative of the Hanoverian rococo. We keep hearing about Reynolds, about Gainsborough. We go on and on about Ramsay and Raeburn. But we never hear about Liotard. Is it his foreignness that disqualifies him?

One thing you don’t get with his pastel portraits is grandeur. Instead, his whispery technique creates an atmosphere of unexpected intimacy. This Scottish selection includes some of the most royal royals of Europe. Yet none of them exudes a sense of power or particular privilege. Rather, as with George Prince of Wales, the Boris Becker lookalike, he’s a kid in a wig and a fancy coat. In Liotard’s best work, you feel you are in the presence of an artist who’s showing us what he sees, not what he’s been told to see.

In a fabulous pastel portrait of Lady Anne Somerset, from 1755, lent by Chatsworth House, he gives us a young woman whose face hovers perfectly between plainness and beauty. She’s wearing an ivory-coloured silk dress, decorated with embroidered flowers, whose textures he captures with spectacular verity. It’s unbuttoned at the décolletage. And the glimpses beyond are so fiercely sexy that they set my blood a-pumping from 250 years away! How very French.

Weirdly, though, Liotard’s nickname was “the Turkish painter”. That’s because in 1738 he fetched up in Constantinople, of all places, where he began churning out absurd portraits of European travellers done up to the nines in extravagant Turkish costumes. William Ponsonby, Viscount Duncannon, wears an enormous turban and a fur-lined cloak, both of which are a couple of sizes too big for him. Lady Caroline Cavendish, Viscountess Duncannon, a pale English blonde, wears something silky, golden, covered in flowers, that would better suit a brunette.

Liotard himself grew an especially large beard and began sporting a Turkish costume on all his subsequent travels. It’s an early display of what modern Lyotardians and followers of Edward Said dismiss in their own gloomy meta-narrative as “orientalism”. According to this grim worldview, the West began exoticising the East and relegating it to the margins so it could better control it by treating it as the “other”. Is that really why Richard Pococke is pretending here to be Taras Bulba?

What this really is, I fancy, is an escape from reality: a societal fancy dress not that different in tone or texture from the pathos-filled escape into costumes captured so poignantly, earlier in the age, by Watteau. Liotard isn’t sad in that beautifully poetic way that Watteau is sad. But he is a sensitive recorder of introspection.

What I like about most pictures here, however, is the evident pleasure taken in the observation. Another of the show’s shorter chapters has Liotard painting still lifes of busy table tops on which nothing is too humble to be appreciated. In a show packed with displays of extravagant mimetic skill, it pays in every portrait to look down from the face to the clothes. Silks, velvets, laces, linens, silver, gold — Liotard gets it all.

There’s something so joyous about the way he records it as well. A happy man with happy skills is working happily in happy places. That isn’t nothing he’s pointing to in that mad opening self-portrait. It’s everything. No wonder they couldn’t find a place for him in the twisty, angsty, neurotic meta-narrative of the rococo.