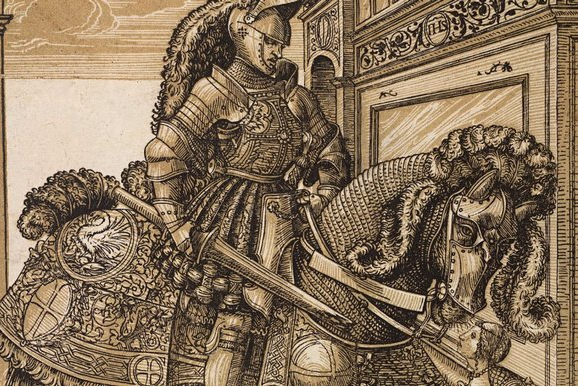 What is it about Germans and woodcuts? Why should one particular nation have a particularly close relationship to a particular way of making art? Since no one, to the best of my knowledge, has studied this thorny issue, or written a book about it, allow me to offer a few sentences of thoroughly unsound speculation.

To begin with the obvious: there are a lot of trees in Germany. You don’t have to walk through the Black Forest to notice this. Even a drive around Bavaria’s marvellous Rococo circuit reveals a landscape with a notably high wood count. This strong presence of forests and trees must, of course, have had an impact on German culture — and I don’t just mean on the Hansel and Gretel level.

In Teutonic sagas, trees play a crucial symbolic role as the connection between the earth and the sky, the human realm and the divine. Which is why the barbarian Goths believed so fully in the Tree of Life. And also why, a millennium and a half later, Caspar David Friedrich painted all those heroic Alpine altarpieces with trees at their summit. For a fiercely Teutonic Christian like Friedrich, Jesus’s hilltop crucifixion on a wooden cross was a continuation of the ancient beliefs of the Goths, not a repudiation. (Hmmm. Maybe “unsound” is a little generous. How about “completely potty”? )

The point I am trying to make is that trees — wood — have a sacred presence in the German psyche. And that any method of making art from trees will have a sacred charge to it as well. Thus, finally, this ramble through the Black Forest brings us to the “chiaroscuro woodcuts” on show at the Royal Academy.

I must admit I had never previously heard of chiaroscuro woodcuts. I know what chiaroscuro is — it’s the interplay between light and shade. I know what woodcuts are. But I haven’t previously encountered them as a duo. It turns out that the combination was invented in Germany in the early 1500s by two masters of the German renaissance, Lucas Cranach and Hans Burgkmair. Nobody is certain who did what first.

The basics of any woodcut are simple. You get a piece of wood, carve away what you don’t want, and print the lines that remain. It’s a medium that doesn’t mess around — simple materials, simple effects, with a direct emotional charge. With a chiaroscuro woodcut, however, the image is printed not with one block, but with several. One block does what woodcut blocks have always done and prints the main image, while the other prints abstracted patches of tone or colour. For a very rough parallel, imagine a watercolour in which the basic shape of the sea has been suggested with patches of blue, then all the boats and swimmers are drawn on top with a pen.

The first room here — the best room — shows Cranach and Burgkmair inventing the medium. In an image printed from two blocks, Cranach imagines St Christopher crossing a raging torrent with Christ on his back. The brown tone of the chiaroscuro block brings solidity to the water and the sky; the agitated lines of the rushing stream and the wading St Christopher bring twisty drama to the foreground.

With Cranach, there is still a feeling that the lines are doing one thing and the colour patches another. But with Burgkmair, an underrated giant of the German renaissance, the divisions are eradicated. His portrait of Hans Paumgartner is the most accomplished work in the show. The minutely observed face, with its sags and wrinkles, is impressive enough, but the treatment of Paumgartner’s costume, particularly his large fur collar, is mark-making of genius. How can lines carved into a block of wood so successfully evoke the softness and shimmer of fur?

Further along in the same room, the big guns of the German renaissance line up to prove that they, too, can do chiaroscuro woodcuts. Hans Baldung Grien gives us a memorably scary Witches’ Sabbath taking place in a forest at night. One naked witch dashes across the sky on a flying goat. Another thrusts her withered dugs at us and threatens us with a dead turkey. Now that’s what I call a witch.

Dürer’s famous Rhinoceros — half beast, half armoured vehicle — pops up in a later impression with a greenish background. And as if to epitomise what the German woodcut is all about, Hans Sebald Beham gives us a huge head of Christ staring at us. No body. No context. Just Jesus and his head wounds, accusing anyone who looks at the picture of complicity in his suffering.

Unfortunately, having arrived in art with this marvellous German fanfare, the chiaroscuro woodcut spends the rest of the display growing less interesting. When the Italians of the 16th century get their hands on it, they quickly engineer a shift in balance: the soft and floaty chiaroscuro begins to take over from the spiky and jagged woodcutting. The subjects become less interesting, too. Instead of mad witch scenes and bold portraits, there are endless retellings of classical anecdotes.

Helpfully, the display sometimes presents woodcuts in different states to make clearer how the technique works. Thus the Dutch maestro, Hendrick Goltzius, gives us two versions of his Hercules Killing Cacus. One is a plain woodcut, the other a chiaroscuro version. Of the two, the one without the patches is the cleaner image. We have reached the point where the smudges of chiaroscuro are a hindrance, not a help.

Speaking of dark smudges, the largest such blotch in our vision of civilisation is that shadowy and worrying epoch known as the Dark Ages. The usual myth is that the Greeks and Romans brought civilisation to Europe, but they collapsed and so Europe descended into barbarism, until the Renaissance arrived and we all grew civilised again. It’s so obviously a nonsense, you wonder how it managed to pass for the truth for as long as it did.

At the British Museum, a new gallery devoted to these so-called Dark Ages proposes a different reading. In a suite of spaces painted an angelic pale blue, filled with crystalline display cases sparkling brightly with glass and bling, the museum informs us that what actually happened was the emergence of a new geographic entity — Europe — created by the migration and settlement of a fascinating constellation of nomadic cultures whom we have previously dismissed as barbarians.

At the centre of the rethink are the Anglo-Saxons, who arrived in England as the Romans were leaving, and who left behind the most impressive of all Dark Age jewellery hoards: the Sutton Hoo treasure. It’s been given its own twinkling glass grotto at the centre of the display, and thoroughly deserves it.

The Anglo-Saxons were the era’s finest jewellers. The exquisite shoulder clasps and belt buckles fashioned from gold and garnets for the buried warrior of Sutton Hoo are remarkable not only for the skill with which they were created, but for the exceptional state of preservation in which they were found. So many Dark Age finds are broken and battered. Not these.

One by one, the other barbarian tribes step up to join the bling fest. The Franks decorated the weapons they used to bang other barbarians on the head with gorgeous silver inlay. The Vandals preferred beefy jewellery made of gold and onyx. The Vikings demanded silver brooches that grew bigger and bigger. The Visigoths were almost as skilled as the Anglo-Saxons in the working of gold and garnets.

The nail in the coffin of the Dark Ages myth is supplied by the Byzantines, whose empire was essentially the Roman empire slipped eastwards, and who were there all the time. The exquisite religious wares of the Byzantines give this important cultural rewrite the superb ending it deserves.