Waldemar talks about his brand new BBC4 series, The Dark Ages: An Age of Light 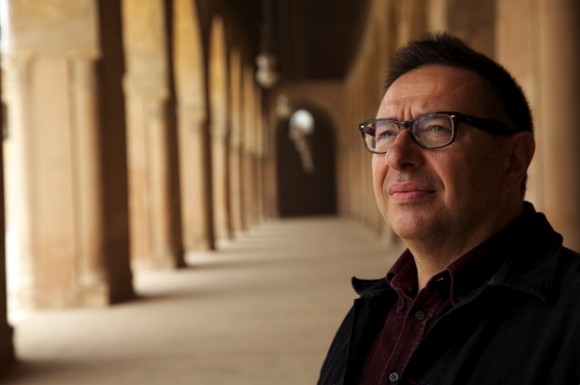 Almost everything about the Dark Ages can be disputed. You could, for instance, have an excellent dispute about the name. Nobody in academic circles today calls the Dark Ages the Dark Ages. If you used the term in an American university, your effigy would be ­carried across the campus and set on fire. Today, the history police prefer to call this the early medieval period, which smacks of desperation to me, and certainly gives you the wrong flavour of the times.

There was nothing in the slightest bit “early medieval” about the outrageously large gold tiara, studded with rubies and emeralds, that I filmed last month in Budapest, and which was once worn by a particularly fortunate Hun princess. Come to think of it, there is nothing “early medieval” about the Huns, full stop. Or the Vandals. Or the Visigoths. Or any of the undervalued barbarian creatives whose art has recently been tickling parts of my body other art cannot, or will not, reach.

Not, of course, that there were ever any actual “barbarians”. That, too, is a term that needs tons of disputing. It comes from the Greek word for foreigner, and the Romans used it to describe anyone who was not a Roman. The name Barbara comes from the same source. So Barbara Windsor is, technically, “Windsor, the barbarian woman”. Lots of words were given a frightful Dark Age twisting by the chief falsifiers of the era: the Christian scribes. Look what they did to the Vandals. Here was an energetic barbarian nation, famous for making mosaics and writing poetry, who ended up passing their nomenclature to the kids who sniff glue in cemeteries.

Anyway, once you have finished disputing the names of the Dark Ages, you can start another fierce dispute about time spans. When did the Dark Ages begin and end? In my new series for the BBC, I’ve gone for some precise dates. I start in AD313, the year when Christianity was legalised in the Roman empire by Constantine’s Edict of Milan, and I end in 1066, when William the Conqueror invaded Britain. Artistically, that gives you a period of intense cultural instability, when nothing was fixed and so much was up for grabs. My kind of period.

Until the 19th century, the Dark Ages were understood as 1,000 years of backwardness, when civilisation basically stopped, stretching from the fall of the Roman empire to the arrival of the Renaissance. This ridiculous world-view was kicked into touch when the Vic­torians developed their taste for gothic and the medieval age began to take shape in their imaginations. But that too involved a profound misunderstanding of what came before, because there was nothing gothic about the Goths.

In Ravenna, the Ostrogoths, led by their fabulous Dark Age king, Theodoric, created the finest mosaic cycles of the entire epoch. Walk into the Ostrogoth church of Sant’Apollinare or, better still, the Arian Baptistry, look up and around, and you will feel shafts of actual sunlight arrowing into your heart, directed there by the deliberate angling of the mosaics. The Goths in Ravenna knew how to shape sunlight.

In Uppsala, Sweden, in the library of the university, I was lucky enough to examine the so-called Silver Bible, an exquisite Gothic text, also produced in Ravenna, in which the writing was done with silver on pages of deep purple ­vellum. It was as beautiful a book as I have ever seen. Yet if you believe the Christian scribes on the subject of the Goths, they were just a bunch of illiterate heretics.

Christianity has a lot to answer for in the Dark Ages. But it also has a lot to celebrate. By starting with Constantine’s conversion, I was able to watch the most heroic and long-winded creative struggle of the entire epoch — the invention of Jesus. What a tussle that was. For the first few centuries of Christianity, there was no need to imagine what Jesus might have looked like. As a tiny and insignificant cult religion, practised in ramshackle room conversions called “house churches” (the best surviving example is in Britain, in Lullingstone, Kent), Christianity didn’t require pictures. It preferred codes and symbols: the fish, the anchor, the chi-ro, made by combining the first two letters of the name Christus.

When Constantine made Chris­tianity the official religion of Rome, however, the secretive little faith suddenly found itself having to create a grand official look for itself — from scratch. Well, nearly from scratch. The Dark Age Christians were surrounded by a parti­cularly plentiful cultural resource: the art of the pagans. So they stole everything from that. The earliest Christs were blond, curly-haired, fresh-faced and beardless, a look borrowed inch-perfectly from Apollo, the pagan god of the sun. The Vatican, in Rome, has ­several galleries packed with marble likenesses of these cheerful initial Christs, armed with their Harry Potter wands, which they wave busily as they perform a ­succession of helpful miracles: turning water into wine, multiplying the loaves, raising Lazarus from the dead. No sign anywhere of wounds or crosses or crucifixions.

It wasn’t just a likeness of Jesus that the Christians had to find. The entire Christian iconography needed to be invented. The halo was another straight steal from Apollo, who had long sported one to indicate that he was god of the sun, while the image of the angel was taken directly from Roman sarcophaguses where winged figures of victory, Nikes, can invariably be seen carrying the soul of the deceased to heaven.

Interestingly, there were no female presences at all in this first Christian art. To compensate for this absence, several of the earliest Christs seem to have been deliberately given feminine character­istics. There’s one in the Terme museum, in Rome, that everyone thought was a girl when he was dug up, because he had beautiful long hair and tiny swelling breasts. In Ravenna, the beautiful Ostrogoth Christ on the roof of the Arian Baptistry has a girly look about him, too, particularly when compared with the heavily six-packed pagan river god who’s up there with him. This splendid religious confusion is one of the best and most exciting things about the Dark Ages. None of our current boundaries was fixed. All of creativity was up for grabs.

Mary did not appear until the 3rd century. When she did turn up in art — in a poignant fragment found in the Catacomb of Priscilla, in Rome — her image was a clear steal from Isis, the Egyptian earth mother. The Christians were particularly keen to borrow the image of Isis as the mother of Horus, the Egyptian god of the sky, whom she holds fondly on her lap. It’s the source of a wonderful Christian parade of subsequent Marys and Jesuses. Incidentally, Horus’s birthday was on December 25, so we should be getting ready to celebrate it soon.

Thus, for the entire span of the Dark Ages, there are no dark images of Jesus — Jesus tortured, Jesus in pain, Jesus with the crown of thorns. When he did eventually grow a beard and man up, around the 6th century, it was in clear imitation of the supreme god of the Romans, Jupiter, from whom the early Jesuses also inherited a throne and a grave magisterial air. One of the firmest reasons why we can be certain the Turin shroud is a medieval fake is because the Jesus it shows — scarred, gory, bleeding — does not actually appear in art until the Middle Ages.

Unless, of course, Jesus delib­erately misled his followers about what he looked like for the first 1,000 years of Christianity. Now that would be a really dark thing to do.

In the last film in the series, the one about the Vikings and the Anglo-Saxons, there’s a cameo appearance from an extraordinary man. His name is Shaun Greenhalgh, and he gained considerable notoriety a few years back when he was arrested as part of a gang that came to be called the Bolton Forgers. Shaun was the one who actually made all the pieces. For The Dark Ages, he creates a gorgeous Anglo-Saxon brooch, using the methods the original artists would have done. At one point, he tells me to hold it up to the light and to watch the gold glow. Boy, does it glow. I think it’s my favourite moment in the series.