From his own bedroom clutter to a cross-dressing wrestler, Jeremy Deller turns his nerdy preoccupations into fine art 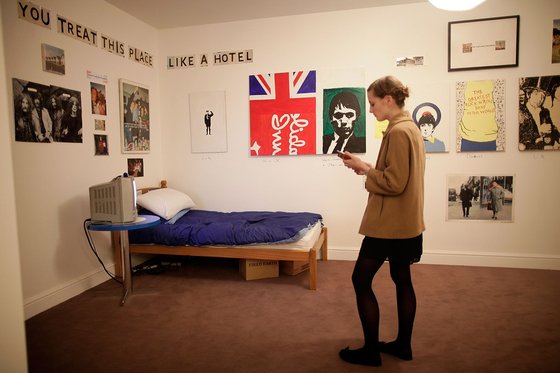 The most obvious char­acteristic of geek art — the first tangible tendency to emerge in British art in the 21st century — is its masculinity or blokeishness. Women don’t make it, and probably never could. The leading geek artists — Paul Noble, Charles Avery, David Shrigley, Jeremy Deller, Marcus Coates — share a sense of having done their thinking in a shed or garage. They are hobbyists at heart, collectors of ephemera, dysfunctional, lonely guys working late into the night to complete their Airfix kit or earwig collection or full set of stickers from the original Happy Mondays line-up. Their shows are underpinned by intense research. Their tastes are planted in teenage angst.

There’s a forlornness to their work, too, a poignancy. The geek artist-to-be is the boy nobody wants to pick for the football team, the last one in the cross-country race, the guy who never gets a Valentine. Their interests separate them from the crowd. I mention all this here because there seems to be a lot of geek art popping its nose above the cultural horizon just now. Noble recently had a fine show of his obsessive ­Nobson doodles at the Gagosian Gallery. Shrigley’s schoolboy surrealism is prompting good giggles at the Hayward Gallery. Now Jeremy Deller has joined him in a double-shed display of upstairs and downstairs, simultaneous geek art.

I should add that “shed”, in a geek-art context, refers to a type of emotional space and not an actual garden building. The true geek artist can endow all kinds of spaces with the qualities of a shed. Coates, who loves nature and displays a particularly potty interest in the animal kingdom, sets his aesthetics in one of those austere research stations that scientists run on the Galapagos Islands or at the North Pole, with a cluttered desk of specimens by the window, a paraffin stove spluttering in the corner and the Big Book of Amazing Animal Facts lying by the sleeping bag.

In Deller’s case, however, the “shed” is his bedroom in Dulwich. Deller won the Turner prize in 2004, but, according to an excellent Culture Show special that went out the other night, he lived with his parents until he was 30. (Apparently, he put all his Turner winnings into premium bonds, which is a very geek art thing to do.) What he did in the evenings is obvious, because the first space you walk into at the Hayward’s lively Deller exhibition is a full-size re-creation of that boomerang bedroom. On the walls are posters of Keith Moon, from the Who. There are pictures of girls getting drunk at parties, and of Deller himself with a girl he fancies, but doesn’t dare ask out. If you open the drawers of the built-in wardrobe that has also been re-created for the Hayward, you can flick through all the sections of his collection. Over here, more pictures of girls at parties. Over there, that predictable Larkin quote about what your mum and dad do to you.

When Tracey Emin re-created her unmade bed in her brilliant 1999 Turner prize display, it was to make a big point about the quotidian reality of female existence. Emin’s message, screamed at the top of her voice, was: “This is my life.” Deller’s equally detailed re-creation of his bedroom has no such emotional clout. Instead, the message is blokeish and mumbled: here’s loads of stuff I’ve collected. Isn’t it interesting? And indeed it is. I spent 20 minutes rifling through the cluttered sock drawers of this remade Dulwich bedroom and still hadn’t seen, read or found everything in them. As Deller’s own mother must surely have shouted at him more than once, Jeremy, turn off that record player and tidy up your room!

The show ahead never stops being busy, informative and packed. Pretty much everything Deller does has the air of a school project about it. In 2010, he got interested in the glamorous cross-dressing wrestler Adrian Street: older fight fans among you will remember him prancing about the ring in the 1970s, constantly smoothing his long blond hair. God, he was annoying. Every grappling fan in the country — with my mother at their helm — wanted to see Adrian Street grabbed by his blond locks and hammer-thrown against the roof of Fairfield Halls. It turns out he was actually the brave and determined son of a Welsh miner who found an exceptionally original path out of the pits by becoming the Marilyn Monroe of heavyweight wrestling.

Although he does not display much sign of psychosis himself, Deller has a fine nose for those who do. In his Turner-winning display at the Tate in 2004, he presented the eerie testimony of the religious cultists who survived the massacre in Waco, Texas. At the Hayward, another of his early projects focuses on the obsessive fans of the loud Welsh rock group Manic Street Preachers. The Manics, you may remember, lost their charismatic, self-harming guitarist, Richey Edwards, when he disappeared near the Severn. Reading the mad and angsty outpourings of these demented Manic fans after watching the Adrian Street video, it struck me that Deller is the art world’s answer to Louis Theroux: a natural ingratiator with a common touch. From some angles, he seems supportive and on your side. From other angles, he shafts you.

At Kate MacGarry, in Shore­ditch, the rural geek artist Marcus Coates presents a gentle investigation of some strange zoological ideas prompted by his interest in nature. I’ve had my eye on Coates for several years now. He is one of the most original artists currently at work in Britain. In previous shows, I’ve seen him dress up as a deer and enact a shamanic ritual involving grunting and dancing for the inhabitants of a tower block in Liverpool. Then there was the time he interviewed the mayor of an Israeli town dressed as a giant bird. Or was it a rabbit? It’s potty stuff, but it addresses a serious topic, the loss of contact between man and nature. How, indeed, can we fill our animal-shaped hole?

Coates’s answer seems to be: by switching on our imagi­nations. The most affecting sculpture at the Kate MacGarry show consists of several rows of scaffolding planks stacked up neatly: shorter ones at the top, longer ones at the bottom. At first sight, it means nothing. Then you learn that the different lengths of plank represent the different wingspans of all the species of albatross in the world. Wow. Is the wingspan of the wandering albatross really as impossibly wide as that bottom plank? Suddenly, the entire scaffolding set grows wings and soars. An investigating geek has discovered an angelic presence skulking in the corner of a B&Q store.