Sin is a terrific subject for a show, if treated with curiosity and respect, but this is dumbing down 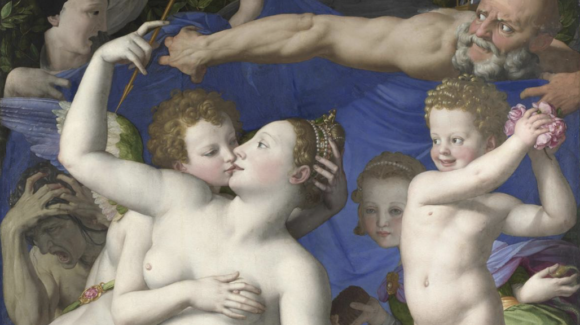 Exhibitions often tell us more about the world we live in than they do about the art they are examining. That is certainly true of Sin at the National Gallery. With its kiddy-language definitions of sin and its pre-teenage presentation of the story of Adam and Eve, this feels like an event aimed mostly at the international eight-year-old.

Generous visitors will see it as a well-meaning effort to expand the reach of specifically Christian and western notions. Non-generous visitors, like me, will recognise it as further proof of the retreat of knowledge. When the wall texts at the National Gallery read like something out of English with Jack and Jill, it is surely time for the sentient among us to throw ourselves on our backs and wiggle our legs in the air. The end is nigh, folks.

It’s a small show, a single room in the basement, lined loosely with a dozen or so exhibits, mostly paintings. Before we enter it there’s a vestibule to navigate that feels like the handiwork of a designer of nightclubs; bucketloads of black paint overwritten with loud, white shouts of “SIN”. To complete the look, someone dressed in stockings and suspenders should emerge from the shadows and introduce themselves as Cynthia Payne. “A pony a smack, you bad, bad boy!” they could offer. Instead, sad National Gallery veterans prowl the twilight looking lost.

Guess who painted the first picture we see? He’s possibly the last artist you would expect to find at the National Gallery introducing an old master exhibition devoted to sin. Here’s a clue: the work in question is a black painting across which are scrawled the words: “Repent AND SIN NO MORE!” Since we’re tiptoeing here into a Hades of delayed gratification, I’ll hold back the answer till the end of this review. For now, all you need to know is that the famous artist instructing us to stop sinning and start repenting doesn’t really mean it. Indeed, no one here seems especially troubled by the dark, deep, fundamental notion of sin.

Looming up in the first vista is Bronzino’s celebrated Allegory with Venus and Cupid. It’s celebrated because it’s so naughty. A naked Venus is being fondled by her son Cupid. He has her tongue in his mouth. He caresses her erect nipple. Their bodies entwine snakily. Few paintings in art insist as firmly as this that anyone caught enjoying them should be sent to Purgatory.

The caption tells us that when the National Gallery acquired Bronzino’s naughty allegory in 1860, it was deemed so scandalous that Venus’s tongue and erect nipple were painted out by restorers. Divine incest was too strong a meat for the Victorian stomach. There was a chance here, therefore, for the gallery to analyse the picture in depth and properly investigate its elusive meaning. It cannot be a celebration of incestuous love. So what is it?

Alas, the present show is keen to stick to kiddy standards, and having flashed the conspicuously complicated Bronzino before us, it moves on quickly to a neon sign by Tracey Emin that glows with the words “It Was Just a Kiss”. Is Tracey thinking the same thing as Bronzino’s Venus, asks the caption, dumbly? Thus the scholarly ambitions of the nation’s greatest collection descend briskly to the level of a game of Snap.

It’s a problem with the show in general. Sin may be a big, dark, fundamental subject, but you would never know it from these giggly proceedings. Having flashed past Bronzino at Lewis Hamilton speed, the display goes on to break various world records for curtness.

Poor old Adam and Eve, our first ancestors and the first sinners, pop up in miniature — about a centimetre tall — in the background of Jan Brueghel’s busy view of The Garden of Eden. Brueghel ignores them because his attention is focused chiefly on the entertaining zoo of exotic animals crowded about the foreground.

Lucas Cranach cuts more directly to the chase with a full-length of a befuddled Adam scratching his head while a pale and Germanic Eve hands him a rosy red apple. There are thousands of great Adams and Eves in art, but this isn’t one of them. What it most obviously lacks is emotional heft: a genuine sense of transgression. The apples are too rosy. The diddy snake popping out of the branches to tempt the first woman lacks a sense of the satanic. Adam, scratching his head — to bite or not to bite? — looks as if he learnt his acting skills in panto at High Wycombe.

Cranach, of course, rarely takes any subject entirely seriously. In most old master situations his humorous contributions are a relief. Here, at the heart of what ought to be a profound investigation of a momentous subject, the comic touch seems especially misplaced.

Fortunately, there are others in the mix to show him how it’s done. Jan Brueghel’s dad, Pieter Bruegel the Elder, is another old master who often uses comedy to make his points. Here, though, in a poignant presentation of that powerful Bible story about Christ and the Woman Taken in Adultery, he gives us a scene filled with dignity and pathos. The adulterous woman has been presented to Christ by an angry mob in the hope that he will command her stoning. Instead, he leans forward and writes in the dust: “Let he who is without sin cast the first stone.” The painting is done with grisaille — a narrow range of grey tones intended to mimic the effects of stone. It’s a technique that heaps weight on to what is already a weighty moment.

Also among the standouts is Velázquez’s beautiful presentation of the Immaculate Conception, in which his wife-to-be, Juana, the daughter of his teacher Francisco Pacheco, models as the Virgin Mary, standing on the moon, surrounded by symbols of her purity. Often confused with the idea of virgin birth, the doctrine of the Immaculate Conception understands Mary, the mother of Jesus, as a woman born without sin. The rest of us, through our descent from Adam and Eve, are besmirched. She is not.

It’s another key biblical understanding that has prompted countless depictions. Few, if any, are as compelling as Velázquez’s. By painting Juana so realistically, by capturing her innocence and youth so perfectly, Velázquez has found a brilliant way to make saintliness tangible.

Other good things include Holman Hunt’s terrified Scapegoat, wandering about the Dead Sea like a beaten dog. Someone call the RSPCA. It’s the only truly profound painting produced by a pre-Raphaelite. In the mix of old and new, Ron Mueck’s tiny but uncannily realistic young boy lifting his shirt to show a Christ-like wound uses smallness to gripping effect.

Sin is a marvellous subject for a show. In art, it has been a huge motivator. Treated with respect and curiosity, it could have resulted in an important investigation. Alas, the sin of dumbing down has reduced it to froth.

The artist who opens the show is Andy Warhol.