A marvellous study of a nation in 20 memorable characters 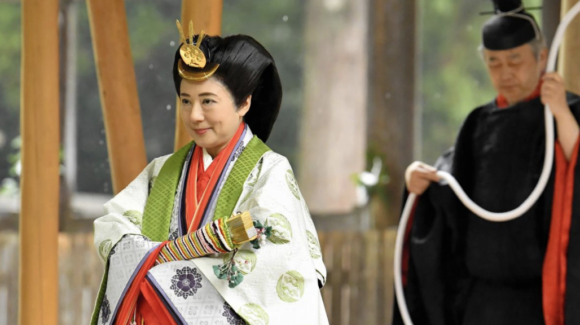 “Who are the Japanese?” Christopher Harding asks with exemplary directness in the opening sentence of his skilled, ambitious, often brilliant attempt to keep up with the weird goings on that constitute the history of Japan.

Japan is so strange that even the strangeness itself manages to feel unusual. I’ve been to plenty of strange places in my time, but none felt as different as Japan. In other places, the strangenesses are big and unmissable: matters of costume and custom. With Japan, most of the weirdness lurks iceberg-like beneath the surface. Any foolhardy gaijin attempting to make sense of stuff so senseless it isn’t even visible has their work cut out.

One of the points Harding makes quickly is that it was forever thus: the Japanese were never like anyone else. Instead of plunging straightforwardly into their history, he chooses the slippery contemporary approach of focusing on 20 notable lives and expanding from them into something broader — generalising on the particular.

The first of these 20 telling lives, Himiko, the “shaman queen”, has no tangible reality to be grasped. She may or may not have existed in the years c 170-248. And, if she did exist, it’s unclear what she was. Legends speak of a warrior queen who carved out the beginnings of the Japanese nation. But the same legends describe a shamanic magician who maintained her power with wizardry. In Japan today every schoolchild knows Himiko, but that’s because, in addition to being the founder of the nation, she’s the heroine of popular manga and video games — the Lara Croft of Japanese prehistory.

The other significant thing about her is that she was a woman. Again, in exemplary contemporary fashion, Harding is determined to foreground the female contribution to Japan’s history. From Murasaki Shikibu, the intimate storyteller of the imperial court who gave the world its first novel with Tale of Genji; to Hojo Masako, “the nun shogun”, who outmanoeuvred the bellicose power brokers of medieval Japan; to Kusumoto Ine, a pioneering female obstetrician of Japan’s Victorian age: extraordinary women keep popping up to pluck the kudos for the making of Japan out of the hands of men.

The 20 lives are arranged chronologically. While the women bring insight and determination to the tale, the men appear particularly keen to cut off each other’s heads. In the cage fight that is the making of Japan, a succession of bloodthirsty warriors adds bucketloads of rhesus negative to the murder lake. First, the emperors of Kyoto are elbowed out by the warrior monks of Buddhism. Then the bloodthirsty Buddhists are elbowed out by the throat-slicing samurai. Then the samurai turn into shoguns. And the shoguns start knifing themselves.

It’s gory, but also exceptionally twisty and complicated. Harding deserves a medal for bravely keeping up with the convoluted “warrior politics” of the Japanese front line.

Another of his talents is a sharp eye for the telling quote that makes these distant presences tangible. Thus the murderous warlord Oda Nobunaga, who unified “Cipangu” with his brutality, “strode around town… with his mouth stuffed with rice cakes”. The unfortunate Europeans who wandered into this murderous arena were soon caught up in the swing of things. At first, they found the Japanese unusually receptive to Christian ideas — since the time of Himiko, the supernatural and the concrete had coexisted happily in Japanese thought. But the missionaries went too far, and in 1597 Nobunaga’s successor, Toyotomi Hideyoshi, put an end to their success by crucifying 26 priests and converts on a hill in Nagasaki. The international close-down that followed, the notorious sakoku, or “closed country”, lasted for over 200 years.

During this isolation the arts flourished in Japan and became like no one else’s arts. Harding turns out to be as adept at describing the country’s artistic development as he is at unpicking its brutal politics. The chapter on Zeami Motokiyo, imperial favourite and the inventor of Noh theatre, is a brilliant illumination for those, like me, who have stared without hope at the Japanese stage and wondered what was occurring.

The final third of the book diverts into a cultural history. Even events as tangible as the militarisation of Japan in the 1920s and the deadly war that followed are understood at a distance through the eyes of Yosano Akiko, a poet of peace turned jingoistic poet of war.

Having started with the legendary Himiko, Harding also ends with a woman, the present empress, Owada Masako, a notably contemporary royal who gave up a diplomatic career to stand behind her husband in ceremonies. The effort led to a decade of notorious depression.

Harding’s book is a marvellous read, full of startling information. I don’t know where he gained his grasp of the intricacies of the Japanese language, but it’s mightily impressive. The only shortcoming is, perhaps, a lack of empathy with the tragic nature of so much of Japan’s history.

The Japanese can be very sentimental. Harding cannot. Thus a subject as loaded with terror as the nuclear destruction of Hiroshima and Nagasaki, or the abject humiliation of the American takeover that followed, is reported with a managerial briskness that skates over the darkness. The shedding of a longer tear may have been appropriate. But in the big picture of this biggest of pictures it’s a tiny shortcoming.

The Japanese: A History in Twenty Lives by Christopher Harding
Allen Lane £25 pp528