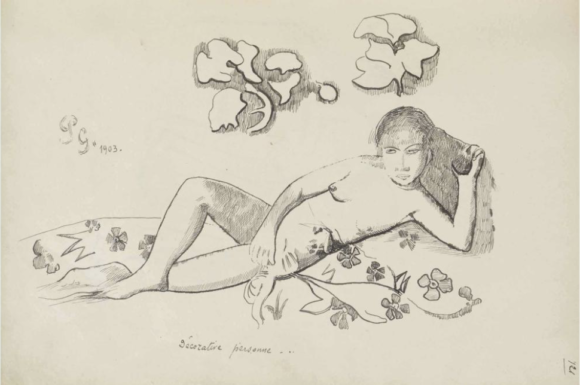 There are many reasons why art is the most wondrous of human inventions. But near the top of the list is its capacity to surprise. Here we are shuffling from pause to pause in our eerie Covid slowdown, when what should be fired from the Courtauld Gallery, like a stone from a catapult, is the electrifying news that they have just acquired an important manuscript by Gauguin. What? You could have floored me with a ball of goose down.

And this wasn’t any old Gauguin manuscript. This was Avant et après, the most important of his outpourings, written in the Marquesas Islands and finished in 1903, the year he died. Consisting of 213 handwritten pages of furious opinion, accusation, illustration and confession, this is the purest stretch of Gauguin on the planet.

When it was translated into English in 1921 the publisher didn’t call it Before and After. That would have been too conceptual. It called it Paul Gauguin’s Intimate Journals, because that was closer to the truth. The question is: how the devil did the Courtauld get hold of it?

It turns out it was bought in the 1920s by the German textile millionaire Erich Goeritz. The Goeritzes fled Berlin in 1934 and settled in London, bringing the manuscript with them. I’ve spoken to a handful of Gauguin specialists about it. None of them knew it was here! It’s never been exhibited. The Courtauld tells me it was received under the government’s Acceptance in Lieu scheme. Some gift.

Gauguin was one of those rare and wonderful humans with magic in their hands who can do pretty much anything. He made art in many ways: painting, printing, ceramics, sculpture. He fenced, boxed and was so good at billiards that during his stay in Panama, where he worked on the building of the Panama Canal, he apparently won the unofficial billiards championship of the world.

Before becoming a full-time artist, he had been a successful stockbroker in Paris and earned a packet. He carved his own picture frames, cut his own walking sticks, hacked out his own clogs. Then there were the musical instruments he played: guitar, mandolin, harmonium. He also wrote. Indeed, he fancied himself as a writer. It’s in this sphere that Avant et après is his dodgy masterpiece.

I say dodgy because you won’t need me to remind you that in his character too Gauguin was a man of many parts. A blackness runs through him, which the modern world has taken against. He could be irritating, aggressive, offensive. His treatment of women was recurrently regrettable. But, as he himself puts it in Avant et après: “No one is good; no one is evil; everyone is both.” The least accurate thing you can do with him is reduce him to a silhouette. 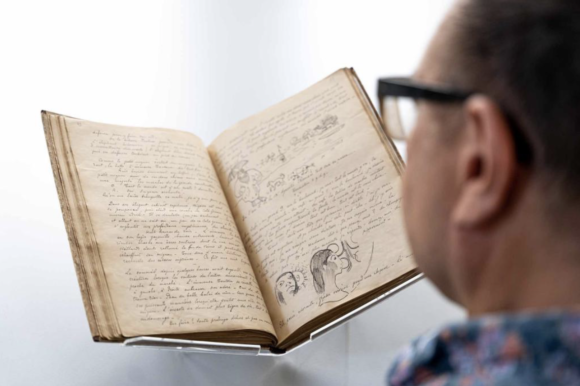 Having been stung into action by the Courtauld’s rock from a catapult, I arranged to see Avant et après at the temporary facility in north London to which the gallery has moved while its home in Somerset House is being rebuilt. It’s a huge project, due to be completed next year. When the gallery reopens, the manuscript will be shown alongside the finest collection of Gauguin’s paintings and sculptures in Britain. In the meantime here it is, nestled in a quotidian office box in the Courtauld’s temporary conservation studio, bristling with energy and invention.

The cover is packed. AVANT et après, it blares, beneath an intricate weave of Tahitian decor. A cherub pops up, a snake, some masks. At the bottom are Gauguin’s instructions on how to take the book: Pour Pleurer, to cry. Pour Souffrir, to suffer. On the other side he changes its mind. Pour Rire, to smile. Pour Vivre, to live. Across the bottom it says In Saecula Saeculorum. I remember the phrase from my days as an altar boy. It comes at the end of the Latin Gloria, where it’s usually translated as “world without end” and followed by “amen”.

His initials are in the middle, enlarged into big decorative twists. In his earlier days Gauguin usually signed himself “P.Go.”, because pegowas French naval slang for a penis, and he loved to annoy people. Here, though, he’s dropped the “o”, and the outrage. He’s being sensible. At least on the cover.

Inside, he jumps from thought to thought, like a wild bird that’s flown into the room and which you’re trying hopelessly to catch. But the handwriting is unexpectedly neat. A touch schoolboyish even. Most of the 213 pages of the homemade book — a simple exercise book originally, with hard covers — are filled with torrents of neatly delivered twisty thinking. Here and there we pause for a drawing or an inserted illustration.

Sometimes the drawings take over, and there’s an effort to say it all with art rather than words. A landscape. A close-up of two sturdy Tahitian legs. Most often there are the beautiful Tahitian faces that seem to stand for so much that ought to be eternal. In Saecula Saeculorum.

That’s what the art says. The writings are another matter. One of Gauguin’s many attitudes was an ungovernable hatred of authority. If someone told him what to do, he did the opposite. It turned him into a show-off and a bully. In Avant et après the nastiness keeps popping up. The church, in particular, comes in for a battering. The Catholic missionaries who had got to Tahiti before him are recurrently accused of exploitation and repression. In any fight with the locals Gauguin is on the side of the Tahitians.

The bishop of Hiva Oa, Gauguin’s last home, is accused of exploiting and seducing Theresa, a convent girl in his care. The gendarme who arrests Vaitauni for not wearing her all-enveloping Mother Hubbard dress and for bathing naked in the river has been watching her enthusiastically for half an hour, Gauguin spits.

I’ve gleaned all this from the old translation of the book, the only one available till now. The Courtauld has embarked upon a new one, which should be ready by the end of the year. I am warned it will be more explicit. The 1921 translation, it seems, tidied up various passages of spleen and swearing.

The dark subject of Gauguin’s treatment of women, and especially of teenage Tahitian girls, keeps returning. But poetically and imprecisely. When the new translation is ready, we’ll know more accurately what his thoughts are on these tricky issues. One thing I know already is that here too he was deliberately unreliable.

In his writings he tells us that Pahura, the model for his great Courtauld painting Nevermore, was 13 when he arrived in Tahiti for his second trip. But I’ve seen her birth certificate and she was 15. When he painted Nevermore she was 17. Still exploited, still too young, but not as young as he claimed.

Why blacken himself further? There will be psychiatrists reading this article who may know the answer. Another of his notorious badnesses, that he abandoned his wife and five children and ran off to Tahiti for the good times, is simply untrue. He was in Copenhagen at the time, working as a tarpaulin salesman. When he revealed his determination to become an artist and confirmed that he was no longer able to maintain the bourgeois lifestyle to which they had grown accustomed, his Danish wife and her family threw him out.

Nor did he spread syphilis around the Pacific. He probably had the disease, but when he arrived in Papeete in 1891 it had long since ceased to be contagious. I’ve met his surviving relatives on the islands. They’re healthy. Their mothers were healthy. They loved Koke, as he was called.

So Gauguin was bad, but not as bad as the modern world has painted him. His art, glimpsed in the quickfire sketches scattered throughout Avant et après, speaks recurrently of warmth, empathy and tenderness.

Before I saw the manuscript, I managed to grab a few words with the head of the Courtauld Galleries, Ernst Vegelin van Claerbergen, and he told me to look out for Gauguin’s attitude to life: the dizzy and exciting high dive of his rapture. He even sent me a few quotations from the manuscript.

“Spend yourself, spend yourself again!’’ he writes. “Run till you are out of breath and die madly! Prudence … How you bore me with your endless yawning!’’

I await the Courtauld translation with interest.