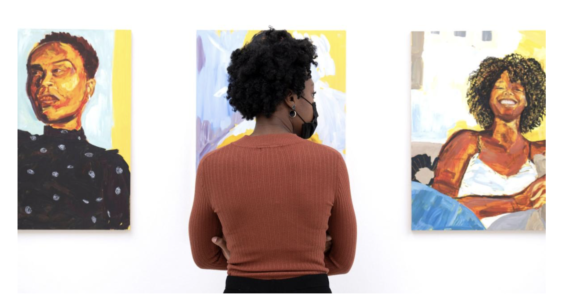 What a good idea. The Saatchi Gallery deserves a slap on the back for organising London Grads Now, a selection of work by students graduating this year from London’s art colleges whose shows were cancelled because of Covid.

Grad shows are the highlight of every art student’s education. They’re the big unveiling, the click-over where being a student stops and being an artist begins. In lots of cases they’re your only shot at the target. If you don’t get noticed at your grad show, where will you be noticed?

There’s more to it than that. The visual arts depend on being seen: the clue is in the name. You can be a great doctor and never have anyone watch you in the operating theatre, you can be a great physicist and never leave your study, but you cannot be a notable artist if you do not put your wares before the public. Grad shows are the completion of a crucial circuit. 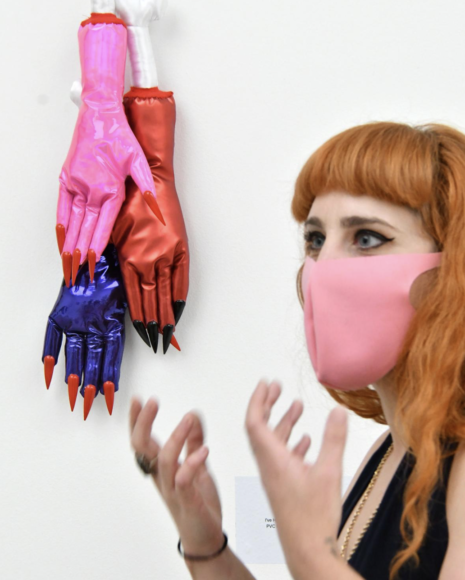 This year, unfortunately, up and down the land, there has been much drooping and gnashing in art school corridors as Covid stuck a pin into the raison d’être of a generation. My heart goes out to every one of them. If the world were made of honey and fairy cakes, they would all get a second shot, like this Saatchi event. Alas, it’s just the London locations that have hit lucky.

All the big art schools in the capital are represented — Goldsmiths, the Royal College of Art, the Slade, Central Saint Martins, Chelsea, Camberwell and Wimbledon. The selecting has been done by college tutors. Most artists are confined to a single work. So it’s a selection of a selection — 200 examples by 150 artists — and not nearly as representative as a proper graduation event, where every artist gets the space to show in depth. But it’s better than nothing.

Indeed, I reckon the airy white cubes of the Saatchi Gallery are such a big step up from the usual cramped art school corners that they offer a more reliable test of potential. If you make it in this show, you can make it anywhere. So I’m pleased to report that a healthy number of exhibitors have seized the moment, and also that the situation has given their work a flavour.

Chelsea, Wimbledon and Camberwell get the first rooms, and what struck me immediately about their contribution was how little video and conceptual art was included, and how much painting and photography. It’s as if the impact of Covid has forced art to go back to basics and get real. The opening rooms suggest it, the rest of the show confirms it. 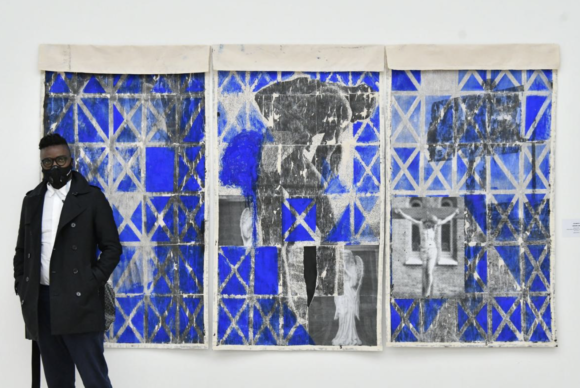 Constanza Valderrama, from the Royal College, tugs fiercely at our heartstrings with a giant portrait of her grandmother printed on Post-it Notes stuck loosely on the wall. Post-it Notes have an inbuilt sense of brevity, a temporary mood. Thus the old lady looking out of Valderrama’s touching portrait seems to say something profound about the fragility of life. 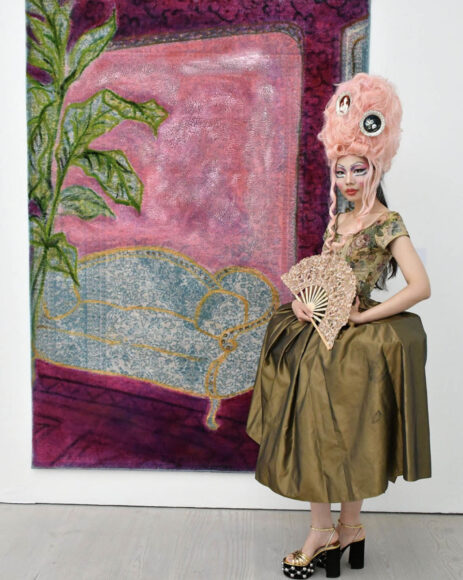 Yi-Chiao Chen, from Wimbledon, paints a Renaissance mother and child in a typical Raphael pose, except that mother and baby are Chinese. It’s tellingly disconcerting. But also warm and gooey, with a powerful sense of family that is another of the show’s constants.

My favourite work here, by Anna Baumgart from the Slade, is a piece of video trickery in which the artist shows herself morphing into four women on a settee — her mum, her two grandmothers and her great-grandmother. I’m not usually one for video, but Baumgart’s use of it is clever and poignant.

It’s striking how many of these exhibitors have foreign origins. A hundred and fifty artists, and not a John Smith among them. Some of this variety will be down to the international appeal of London’s famous art colleges, but some of it will also be down to economics: foreign students pay more. 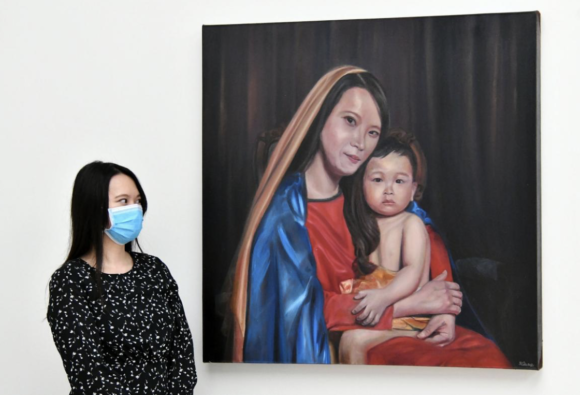 Thus an unexpected line can be traced from the advent of Thatcherite economics to art’s present-day obsession with identity. There’s a recurring sense here of art schools being a home from home; somewhere square pegs can find a slot. With so many exhibitors originating elsewhere, the search for identity becomes an insistent and inevitable quest.

Black artists do it most bluntly. “I’M BLACK WOMAN EVERYWHERE EVERYDAY,” blares out Liliana A Romero, from Camberwell, above a striking, hard-edged portrait of a black face. More directly still, Michael Forbes, from the Royal College, presents a simple text piece, white on black, which he calls Blackness (the Manifesto). “Society needs blackness expressed — it is by expressing Blackness, freedom is created for others,” he lectures. 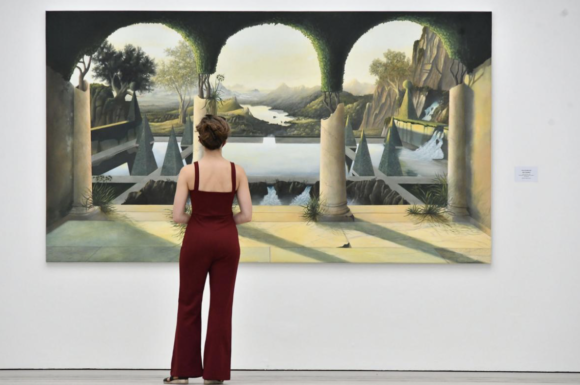 This search for identity and origins continues in the many works that explore the conundrums of gender and sexuality. Claudio Pestana, from Camberwell, gives us a trio of cartoonish depictions of himself dressed in drag, frolicking provocatively around the English countryside. He poses in front of a tractor. He opens a gate for some passing huntsmen. It turns out the artist spent the lockdown in Dorset where he found endless opportunities to compare himself with the surrounding rural norms. The result is a war on bucolic England in a series he calls: Fag Attacks the Country.

More hilariously still, the curator of the entertaining Slade School contribution, the trans artist Victoria Cantons, takes the opportunity to select herself for the show, and also to seize the biggest space for the biggest picture; a camp interior with a large day bed and a small clock. Droit du seigneur, 2020-style. 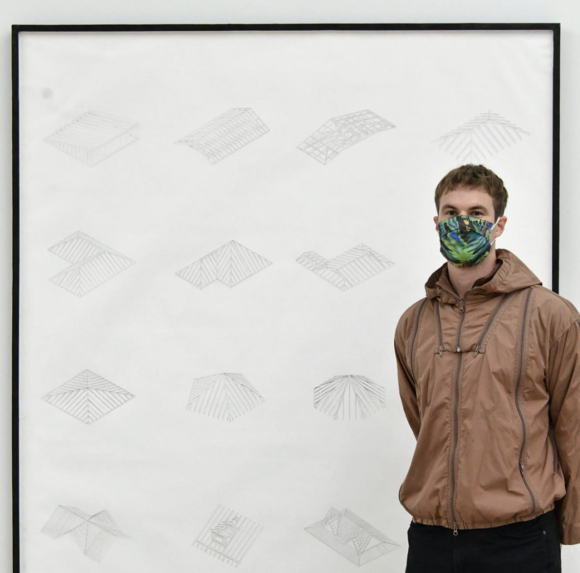 Every college gets a gallery or two to itself. So it isn’t just the students who are judged, it’s also the colleges. How do we know that Goldsmiths, which used to be the best, is now the worst? Because their tepid showing — bitty, derivative, lacking artistic guts — makes it obvious.

Back in the better rooms, Pestana’s escape to Dorset directs us to the second of the show’s big themes; a return to nature. There’s a surprising amount of vegetation on display, as if the Covid summer involved lots of fleeing from London. Nicole Coson, from the Royal College, cuts up fragments of horticultural imagery to create a jungle of tropical greens that made me want to jump in and explore. 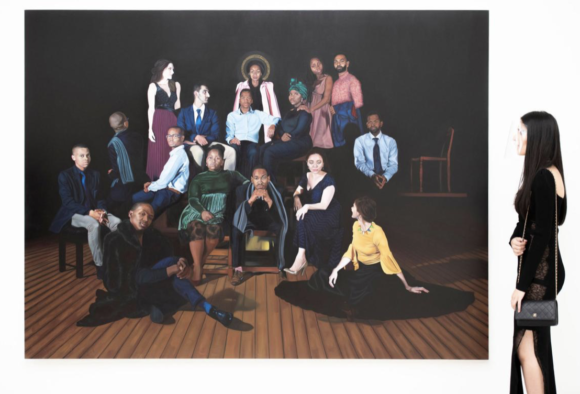 The seaside is also popular. Toby Watkins, from the Slade, paints a moody British storm, complete with seagull. But when you dodge the waves and get closer, you notice a sinister telecommunications device bobbing about in the water.

The best of the nature pictures is by Qian Jiang, from the Royal College, who gives us a beautiful minimalist arrangement of what appear to be 60 views of lapping waves, arranged in a neat grid. As you lean in the grid gets blurry, and the picture starts to pulse like a piece of op art. Then you realise not all the views of the waves are the same. They were actually taken over several seconds. 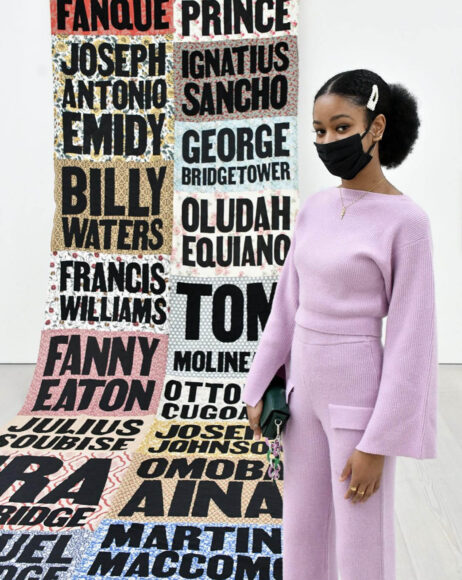