It is the first of the big guns to open its doors, and what treasures await 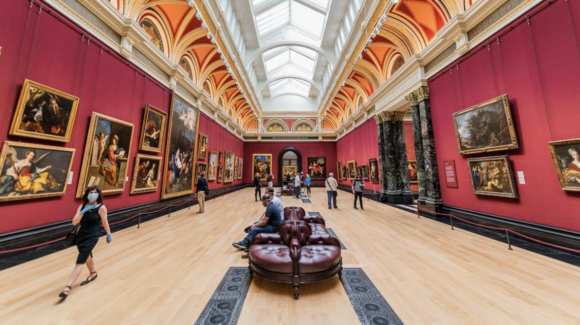 Do you remember your first love? How you sat for an eternity by the phone, hoping it would ring? How every time you started thinking about something else they would barge back in? How you hung on every smile, every touch of the hand? Waiting for the National Gallery to reopen wasn’t quite as torturous as that, but it was of that ilk. The last time I was there was 128 days ago. So yes,I was desperate. And no, it didn’t disappoint.

The National is the first of the big galleries to reopen for various reasons. In an era of little support for the arts it has been supported more generously than most. No key members of staff had to be furloughed or laid off. So when the call came to reopen, there were enough hands on deck to do it quickly.

As most of its holdingsare paintings, it was easier also to organise the viewing of them. Walking past a picture on a wall is a far less complicated gallery experience than meandering through an installation or sitting in the dark watching a shaky video. The ye olde art journey offered by the National is easier to simplify, easier to organise, easier to police, easier to love.

Finally I have to take my stetson off to the National’s director, Gabriele Finaldi, who has shown the quality that you need most in circumstances such as these — excellent leadership. He’s been calm. Said the right things. Made the right calls. Got the timings right. Bravo, Finaldi.

You’ll be wanting, though, to know how it went for me after my 128 days, and what it will be like for you when you follow me through the reopened doors. As we’re all so much more practised at simplicity than we were, I can get it down to two words: bloody and marvellous.

You come in at the Sainsbury Wing entrance on Trafalgar Square, and leave through the Getty exit on Charing Cross Road. Inside are three recommended routes through the collection. For Covid reasons maps are not handed out, so you download them chez vous.

Masks are advised, but not compulsory. When the shop reopens I hear it will be selling masks decorated with Van Gogh’s Sunflowers. Had it been up to me I would have gone for Rubens’s Massacre of the Innocents, but that’s why I am not a successful National Gallery director and Finaldi is.

Route one of the three journeys involves turning left at the top of the Sainsbury Wing stairs and heading into the 14th century. Straight away you pass the Wilton Diptych, pretty much the only important work of British art to survive the Reformation. The rest was gouged, stamped, burnt after Henry VIII began his wife-swapping. The eradication of 1,000 years of Catholic art by, first, the Tudors and then the Cromwellians has left British art with half a history. The poor, tiny Wilton Diptych, beautiful though it is, has to stand for so much.

After the Diptych you get to the Leonardo da Vincis and the Piero della Francescas; The Arnolfini Marriage and the Raphaels. A couple of things are missing — the Uccello, some Botticellis. Apparently they’re stuck in quarantine in Japan, along with the aforementioned Sunflowers. The National sent them out on tour to raise much-needed cash and then Covid struck.

Each route is slated to last about half an hour, but I get the feeling no one is going to whip you if you linger a moment longer. You’re instructed to keep two metres apart, and with fewer people in the gallery you actually get to see the art in better conditions than before! So book that ticket.

The green route takes you through the Dutch and Flemish collections. Walking into the room filled with Rembrandts is especially impactful. It’s like having a hand rest on your shoulder and a voice whispering in your ear: “This is humanity. This is us.” He’s so deep, so direct. The right artist for the Covid world.

In the Flemish rooms the huge Van Dyck of Charles I on horseback has finally emerged from its two-year restoration. I’m surprised they got it into the gallery. It’s so big, it looks as if it has been wedged between the floor and the ceiling. But the most fruitful Flemish moment comes in the room before. The Courtauld Galleries are closed for restoration, so they have lent their key Rubens paintings — Landscape by Moonlight; Descent from the Cross — to the National, where they enlarge the Rubens experience into something stunning. Boy, was he good. Boy, is that clear here.

British art gets a good showing in a reorganised British Gallery featuring Turner and Constable, Hogarth and Reynolds. It’s the second half of the story; how the orphans survived the loss of 1,000 years. For sheer weepiness, though, the place to head is the Gainsborough room, where that lovely picture of the artist’s two daughters chasing a butterfly has been joined by a new acquisition, a portrait of Margaret, the younger daughter, playing a theorbo, a kind of lute.

It was painted 20 years after the butterfly chase and continues the story to a sad descent. Mary, the elder sister, married disastrously to a German composer, Johann Christian Fischer, and lost her mind. Margaret devoted her life to looking after her. She’s now on one side of the door, while the two of them together are on the other. It’s a poignant moment and a beautiful installation.

Halfway along the maroon route is the thrilling Titian show — Love, Desire, Death — that was open for only a few days before the lockdown, but which will now stay until January. It features seven big paintings depicting the complex and inventive love lives of the gods, produced by Titian for the Spanish king Philip II in the 1550s and 1560s. This is the first time they have been shown together since then.

Seeing them again after 128 days I found it easier to enjoy the details and especially Titian’s exquisite touch when it came to painting flesh. If you’re dealing with the loves of the gods, there will always be large expanses of nudity. But, like Rembrandt, Titian made flesh feel warm and human. His great achievement in these Poesies, as he called them, is to make the loves of the gods feel like everyone else’s love — fragile, fraught, whispery and emotional.

The big wow moment on the reopened journey is the central gallery, now called the Julia and Hans Rausing Room after the heir to Tetra Pak billions who funded its restoration. With his, er, chequered past, Hans Rausing has done plenty to forget in his life, but what he has made possible at the National should make him eternally proud. Wow, wow, wow.

The roof has been opened up and decoratively restored. New floors. A perfect new colour. But it’s what’s on the walls that slaps you. The Caravaggios. The Artemisia Gentileschi. Guido Reni’s gorgeous Europa.

Baroque art’s chief ambition was to capture your interest, involve you and move you. The new gallery does that spectacularly well.

Anish Kapoor
Many of Kapoor’s major sculptures take up temporary residence in and around a stately home.
Houghton Hall, Norfolk, until Nov 1; houghtonhall.com

Gordon Parks
The first in a two-part exhibition of the great American photographer, whose chief subject was racism.
Alison Jacques, London W1, until Aug 1; alisonjacquesgallery.com

Bill Brandt/Henry Moore
A second life for this show exploring the converging careers of the German-born photographer Brandt and the British sculptor.
The Hepworth Wakefield, Yorkshire, Aug 1-Nov 1; hepworthwakefield.org