The Serpentine’s daft ‘Do It’ project doesn’t do it for me — they could survey developments by black artists instead, says Waldemar Januszczak 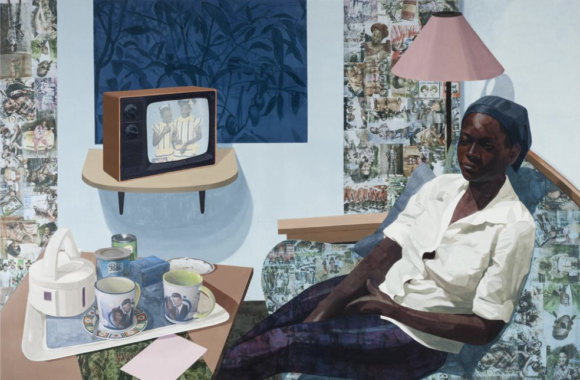 Not much has occurred during this terrible plague year of ours that can be filed on the plus side of the human ledger. Perhaps the only true positive — given how regrettable most of the positives have been — is the clarity the Great Pandemic has enabled when it comes to recognising what is important and what is not.

Tragedies have a way of putting things in perspective. Of making things easier to see. Life can trickle by unnoticed, unsavoured, like sand in an hourglass, until something grim happens, and suddenly you begin to count every grain. It’s like having a giant magnifying glass thrust in front of you. You can see when people are behaving dishonourably, and when they are not. You see when they are doing well. You see when they are lying. And in my world, the world of art, you can see what is worthwhile, and what isn’t.

For a big dose of the latter I recommend a visit to the website of the Serpentine Gallery, where, buried in the cascade of confusing directions, you will find a report on a gallery initiative called the “Do Its”. These Do Its are the brainchild of the gallery’s director, Hans Ulrich Obrist, who has apparently been doing them since 1993. What happens in a Do It is that an artist issues you with instructions for an artwork, and then you go off and fulfil them. (Although it might be a good idea to draw the curtains first!)

Thus, Aurelia Guo tells us: “Treat yourself like a dog.” So “woof woof”, Aurelia. “Grrrr.”

Carla Juacaba instructs: “Put all your tears in a pot. When it’s full of sweet air, throw it in the ‘flying rivers’ of Brazil.” Sure thing, Carla, but only if you buy me the ticket and pay for the hotels.

Jonas Mekas advises: “Move your finger up and down for one minute every morning.” Easy peasy.

My favourite command among these thunderously daft detours, though, comes from Lauren Brincat, who writes: “Chop the ends off a cucumber. Place one end in the middle of your forehead. Place the other onto your lover’s forehead. The ends are now the beginnings.” I bet care homes up and down the land are filled today with the happy trill of art lovers chopping cucumbers. Or maybe not.

My Do It for the Serpentine is this: “Take all these daft conceptual snippets and throw them in a lake. Then go back to the office and plan a season of exhibitions that mean something real in these terrible times of ours.”

Fortunately the art world is a broad church, and while some corners of it waste our time with fripperies, other corners have important things unfolding in them. Truths are emerging. Big emotions are being expressed. And no, I wasn’t thinking of the spontaneous performance that occurred on the quayside in Bristol last week, when an effigy of a monster who made huge amounts of money out of the transport of slaves was dumped into the water. I’m thinking of the quiet, transfixing power of Njideka Akunyili Crosby.

Born in Nigeria in 1983, she went to America when she was 16, studied at Yale, married a white Texan called Justin Crosby — he’s also an artist — and has recently been producing the most compelling art I have seen for years. In most circumstances it is possible to view “Black Lives Matter” as a slogan; an effective political rallying cry. But in Akunyili Crosby’s art it becomes a forceful and resonant truth.

The picture here is called Super Blue Omo. The first thing you need to know about it is that it’s huge: 9ft wide and 7ft tall. This is art on the scale of a Renaissance fresco or a baroque altarpiece.

Most art of this size is action-packed or dramatic; full of movement or heroic moments. Here, all that’s happening is that a woman is sitting on a settee at home, taking tea. The telly is on. She’s lost in thought. There’s a whispery intimacy to her situation: the soundless ticking of a clock. It’s a mood we haven’t seen much of in art since Vuillard or early Bonnard. Their paintings lower-cased the mood. This one upper-cases it.

It all feels a bit faded as well, like a printed cloth that’s been left in the sun. The art is modern, but its details are old-fashioned. The last time I saw a telly like that was in my mum’s living room before she died. That was 20 years ago. It’s even longer since I last heard of Omo. Wasn’t it the big rival to Daz? The advertisement playing on Akunyili Crosby’s telly is a washing powder advert that she remembers from her Nigerian childhood. Use Omo. Omo is best.

These nostalgic textures cling to her work like mud to a shoe. But they don’t set it in the past. Instead, they add something resonant and poetic to the present; a sense of loss, a conceptual spread. Her pictures are ruminative and sad. Look how the two mugs waiting to be drunk on the table are decorated with lovey-dovey portraits of a couple: Njideka herself and her husband, surely? But the woman is on her own. And there’s a letter on the table. Is it from him? It’s as if Vermeer’s moods have been time-machined into today.

And it’s all so inventively done. The reason the pictures feel like faded cloth is because the patterning on them is created from hundreds of tiny screen-printed images collected from Nigerian newspapers and family photo albums. Every picture has countless layers of this rich history embedded in it. Yet somehow she manages to place a relaxed domestic image on top of it all. You can press your nose as close as they’ll let you to an Akunyili Crosby picture, and I promise you will not be able to work out how it was made. Some of it is painting. Some of it is coloured pencils. Some of it is collage. All of it is magic.

The black experience is often presented shrilly in art, often noisy, often angry. Understandably so. But here it’s warm, calm, domestic, everyday. And Akunyili Crosby is not the only black artist proving that real issues inspire real art. Kerry James Marshall, Lynette Yiadom-Boakye, Deborah Roberts, Zanele Muholi are doing the best things that anyone out there is doing. Black art matters because it’s showing everyone else the way.

The single best thing the Serpentine Gallery could do when it comes out of the lockdown is to mount a survey of these important developments. Just do it.