A virtual exhibition wraps up the rich and dynamic history of this exquisitely beautiful Japanese garment, says Waldemar Januszczak

At the beginning of the Great Lockdown, before any of us knew how best to negotiate it, I remember reading something by a pop psychologist on the importance of keeping up appearances. Make an effort, he said. Dress determinedly every day. Don’t turn into a slob.

The guy seemed to know what he was talking about — he had interviewed some famous sportsmen who had had to cope with periods of serious injury — so I did what I was told. For two days. Then I began the happy descent into slobdom in which you find me now.

As I write I am sporting the same grey fleece jogging shorts I wore yesterday. I don’t jog — a sweaty and spluttery pastime! But I do find jogging shorts comfortable and handy. The sun is shining, so I’m barefoot. And today’s outfit is completed by a faded Glastonbury T-shirt I bought in 1994. Examining my chest, I see Pulp played that year, and Blur. So no, reader, by no stretch of the imagination can I be said to be making an effort. But I’m happy. I’m sane. And the delicious sensation of sartorial liberty I have gifted myself is making my toes wiggle. Free at last.

You would think, therefore, that I am singularly mal-attired to confront today’s critical task, which is to investigate the complex couturial history of that especially crisp and specific garment, the kimono. But, reader, it is precisely because I have so carefully prepared my state of otherness, because I provide such a striking contrast to my topic, that I am seeing everything today in such high relief. Is there a more exquisite article of clothing on the Shinto earth than the Japanese geisha robe? 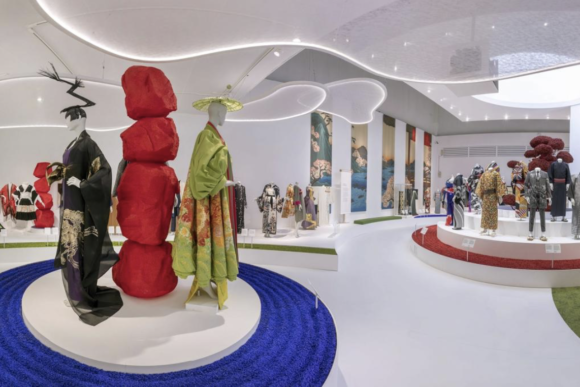 The Victoria and Albert Museum appears not to believe so, because right now, in the parallel universe known as Life Before the Lockdown, we were supposed to be enjoying Kimono: Kyoto to Catwalk, the most ambitious such survey yet mounted. In the parallel world, kimono fever might now be raging. Instead the curator of the show has created a video tour of her event. It’s just gone online. And it’s all there is.

Mind you, it’s very good. In recent months I have had to view a lot of online efforts from missing shows, and their standard has been woefully low. Organisations such as Tate Modern or the Serpentine Gallery seem determined to privilege style over content in their jog-throughs. Their cutty, awkward, frightened films have failed in the single most useful task an online tour can achieve — to give you a tangible sense of the event. That is not true of the V&A’s charming five-part YouTube tribute to the kimono.

The curator Anna Jackson turns out to be a perfect guide to the dream. She, too, is pleasantly crumpled and of an age at which she no longer needs to appear excited. Her decision to wear what appears to be a stripy old beach towel, retailored into a loose kimono shape, is excellently brave. And from start to finish you know — you just know — that here is a guide in full command of her subject matter.

The word kimono means — and this came as something of a shock — “the thing you wear”! In its early usage, this fantastical ukiyo-e geisha gear was, of all things, the most adaptable garment in Japanese society. Men wore it, women, children, samurai, merchants, commoners. For a thousand years the kimono was the Kyoto version of my grey jogging shorts.

This commonness began to mutate in the 17th century, in the great heyday of the shogunate. Think of a Japanese woodblock print; that’s the world we’re talking about. In ukiyo-e Kyoto kimonos became ambitious and started to separate into a strict manly stream and an increasingly ornate female one. Thus the show’s key message — that far from being culturally static, as we usually assume, the kimono has a history of constant change — gets its early evidence.

Inserting her stripy beach towel into recurrent comparisons with a stream of gorgeous early kimonos from the V&A’s collection and abroad, the reliably informative Jackson fills us in on the minutiae of kimono design. The cutting patterns from which they were assembled are so simple: seven strips of cloth, arranged in seven parallel hangs. To make a kimono, all you need is a ruler and a sewing hand.

And this simplicity is precisely what gives the garment its sartorial distinction. Whereas western clothes for women emphasised the hips or buttocks or breasts, the kimono was a straight tube that hung from the shoulders to the floor. Shape-wise they are asexual. Only later, when they finally fell into the hands of us showy gaijin, did they begin to contract here and expand there.

With nothing to fret about in the cutting patterns, the kimono was free to focus on its key ingredient; the textile from which it was assembled. It was here that the magic bloomed. Working in exquisite silks and satins, intricately embroidered with complex arrays of image and colour, skipping nimbly from the abstract to the figurative, the kimono became “a piece of art to wear”. The sense of quotidian functionality that distinguished the beginnings of its story gave way to something like the opposite; a sense of heightened paradisiacal beauty, a dreamy unreality, as if the kimono were a wearable alternative to the everyday. The geishas of Kyoto, their humanity hidden deep inside outrageously gorgeous displays of fabrics, became especially dreamlike in their presence.

With plenty of generous illustration from Japanese woodblock prints, the story of the kimono is told on T-shaped stands created to suit the T-shaped cuts. One thing the costume never lost was its ability to adapt. Finding herself standing in front of a black number decorated with white skeletons, the increasingly impish Jackson remembers the garment’s arrival in the world of Japanese theatre, where it was transformed into a subtle messaging service. Thus the coded patterns on the robe sported by a famous kabuki actor translated into the unexpected motto “I don’t give a damn”.

The final section of the show, and the final two films in the video tour, describes the kimono’s arrival in the West and the exotic use that was made of it by gaijin designers. Jackson tells how the celebrated Edwardian couturier Lady Duff Gordon, who worked under the cloth name of Lucile, was wearing a mauve kimono under a fur coat when she made her miraculous escape from the Titanic.

More recently, pop stars from Madonna to Björk have attempted to steal the kimono’s air of dreamy unreality and exotic otherness. But these are not qualities that can be clipped on as easily as a Barbie outfit.