Waldemar Januszczak’s new series on BBC4 finds out the truth about works by Van Gogh, Cézanne, Gauguin and Seurat 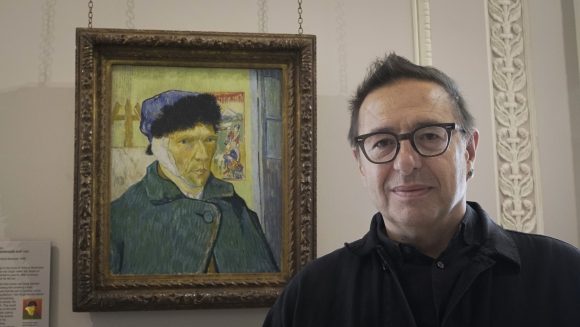 I did not set out to discover why Vincent Van Gogh cut off his ear when I started making my series The Art Mysteries. That was, as they say, a happy accident. But finding out the truth about that notorious act of self-mutilation was certainly a dramatic moment. And it pointed the film in exactly the direction I was expecting it to go: the direction of the heart. Poor Vincent really was hopeless at love. He wanted it so much. Yet he was so bad at finding it.

In The Art Mysteries, I am a kind of art detective who sets out to reveal the hidden meanings and buried secrets of famous paintings. The Van Gogh episode is about a picture that hangs in the Courtauld Gallery in London, Self-Portrait with Bandaged Ear, painted in Arles in January 1889, soon after he returned from hospital having slashed himself with a razor. It’s a head and shoulders view: Vincent in a furry hat, standing in front of his easel. A huge bandage covers the side of his face where he had injured himself. His expression is sad, thoughtful and distant.

When he painted it, there was no one else living with him in the famous Yellow House. Paul Gauguin, who had been there before Christmas and who played a crucial role in the events leading up to the mutilation, had gone back to Paris. No, that’s wrong. He didn’t go back to Paris, he fled. Gauguin was involved. That was definite.

Whenever I had visited the Courtauld Gallery — which was as often as I could; what a fabulous collection — I had always stopped to look extra-hard at this sad and grisly self-portrait. Anyone who loves Van Gogh — which is all of us, right? — knows he was an especially emotional and direct painter. That’s why we love him. His art doesn’t play games. It tells it like it is.

Yet in Self-Portrait with Bandaged Ear there is something mysterious going on. Some hidden messaging. Some symbolic flimflamming. An obvious detail is the way the easel behind him forms a cross. It’s too clear to be accidental. But what about the Japanese print hanging on the wall behind, showing three sketchy geishas in front of Mount Fuji? What is that doing there? Why the Japanese print in a self-portrait?

When Gauguin stayed with Van Gogh in Arles for those few fatal months at the end of 1888, he took on a teacher role — the experienced older painter — and we know from Van Gogh’s detailed letters to his brother Theo that Gauguin was constantly advising his painter buddy to be less naturalistic. Gauguin believed in an art that was symbolic; that conveyed its meanings with subtle allusions and purposeful clues. Van Gogh, meanwhile, painted from the heart. He tried to capture what he felt as well as what he saw. And that’s not symbolism.

However, he did try out some of Gauguin’s lessons. The letters to Theo spell that out. Prompted by Gauguin’s example, he produced the most symbolic pictures he ever painted. Self-Portrait With Bandaged Ear appears to be a belated example. So what was it trying to say? What did the Japanese print really mean? Finding out the truth, following all the trails, was an adventure.

The underlying problem with the story of Van Gogh and Gauguin is that it is so well known. So many others had stomped through the terrain already that there was a general assumption everything discoverable had been discovered. Yet in art, the truth has a way of hiding in plain view. Sometimes you don’t need to turn over lots of new stones to find it. You just look harder at the old stones.

To understand what Van Gogh was really trying to say in his sad and mutilated self-portrait at the Courtauld, you have to go back to basics. Working on the principle that nothing has been included in the picture by accident, I finger-searched through all the details. That’s how I found out about the ear-cutting. Not by coming up with an outlandish new theory, but by repeating Vincent’s journey in Arles and seeing where it took me.

So that’s what I do in these films. Not just with the Van Gogh self-portrait, but with three other pictures I investigate — by Gauguin, Georges Seurat and Paul Cézanne. Each picture gets a film to itself. Each one takes me on a convoluted journey from mystery to solution.

It helps that I have been an art critic for a long time. To get the answers I had to call on every minute of my experience. I focused on the post-impressionists because their art rings such a strong bell in us, but also because they seem to have been especially ill served by the transformation of the art world.

When it started out, art history was a desire to find out more about great artists by seeing them in the context of their times and understanding their lives better. Yet at some point, midway through the 19th century, these healthy ambitions turned into something less trustworthy. Art history began to imagine itself to be a science with its own pseudo-scientific language and formed a growing reliance on etiolated theories and pre-existing models. Instead of illuminating the truth, the theories started to conceal it.

In my experience, every painting has a purpose. Artists are always trying to tell us something. Even someone like Cézanne, the so-called father of modern art, who is held up so often as a rigorous and theoretical artist, had stubbornly human ambitions for his work. I was certain of it. Nevertheless, I was still surprised to find that lurking behind the stillness and calmness of his Card Players was a turbulent religious ambition, fired by specific gothic memories of the cathedral in Aix.

Gauguin was a natural follow-up to Van Gogh. The two Art Mysteries about the art buddies almost marry up. Women are involved, of course. They always are with Gauguin. But Vision After the Sermon, which he painted in Brittany in 1888, is a picture about saying no, not a picture about saying yes. And only a careful slog up and down the hills of Brittany, from church to church and book to book, finally revealed what everyone had been missing.

As for Seurat — from the moment he started showing his work he was unwaveringly and chronically secretive. Seurat never told anyone anything. That is not the same thing as having nothing to say. Seurat said plenty. It just isn’t obvious.

The Art Mysteries starts on BBC4 on March 17