Van Eyck may not have invented oil paints, but he mastered them in an exceptional way, as this enlightening show in Belgium proves

People used to believe Jan Van Eyck (c 1390-1441) invented oil paints. When I was a student, that was what I was taught. We now know this was another of the tall tales told by the first “art historian”, Giorgio Vasari, whose celebrated Lives of the Artists was published in Florence in 1550. In fact, oil paints have probably been in use since classical times. I filmed some Buddhist murals in Afghanistan, done with oils, dated to about AD650. So no, Van Eyck did not invent oil paints. He did far more than that.

What he really achieved is the subject of a riveting investigation in the Belgian city of Ghent, where his greatest work, the huge altarpiece known as the Adoration of the Mystic Lamb, has recently been restored and is the centrepiece of a cheeky Flemish land grab that’s attempting to snatch large chunks of Renaissance glory from those pushy Italians. The altarpiece is on display in its bright new state at St Bavo’s Cathedral, while a thoughtful show that makes something solid out of Van Eyck’s shadowy presence has opened at the city’s fine-arts museum.

Completed in 1432 and consisting of 24 painted panels arranged into a towering iconostasis, the Ghent altarpiece has always been held up as one of art’s giant accomplishments. You may remember George Clooney having to rescue it from the Nazis in The Monuments Menbecause Hitler admired it so much, he decided to keep it. Eight years ago, the decision was taken to embark on a toe-to-toupee restoration of this 24-piece smorgasbord of intense religious imagery. 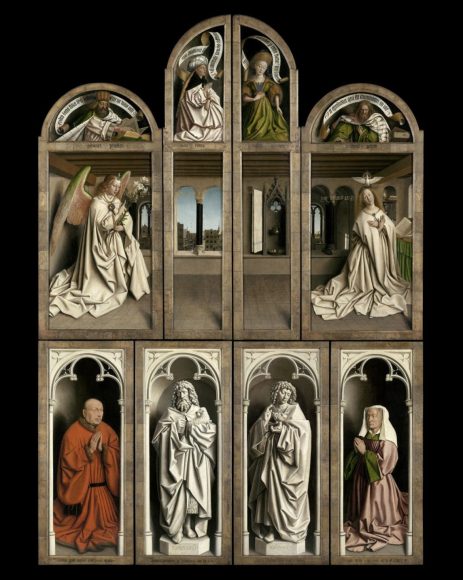 Restorations are always controversial. This big one was always going to be testy. And so it proved. In particular, there has been a fuss about the way the central figure of the lamb standing on a sacrificial altar in the main panel has been made “less sheep-like” and “more human”. What has actually happened is that 500 years of misleading overpaint have been removed and, instead of a blurry sheep that’s wandered in from a nearby farm, we can once again sense an intense divine presence on the altar. The fierce stare of the Lamb of God acts now like a vortex in a bath when you let out the water: everything heads there. A small correction has unified Van Eyck’s entire pictorial scheme.

The removal of half a millennium of smoky varnish has changed the tonality of the picture as well. Where the paschal events portrayed by Van Eyck seemed previously to be set in a murky autumn, they are now emphatically in a zingy spring. Thus an Easter timescale and a resurrective meaning have been returned to their rightful place. And it all feels much more 3D.

So that’s a triumph. But the show at the Museum voor Schone Kunsten takes things further. Van Eyck: An Optical Revolution is the largest Van Eyck event ever mounted, built around the largest selection yet of his surviving works: 13 pictures from an oeuvre of just 22. These are accompanied by strong workshop contributions, plenty of illustrative material from his epoch, an assortment of contemporary documents that alter our understanding of his political role, and various works by his Italian contemporaries, whose chief ambition is, I suspect, to prove how far ahead of them he was.

Also on display are eight of the newly restored panels from St Bavo’s Cathedral — the ones from the side wings that you cannot see when the altarpiece is open. You can certainly see them now. Close up. Beautifully lit. Fresh from the bath. Not since they were painted has anyone been able to inspect these masterclasses in the use of oil paints as intimately as this. The exhibition employs these dazzling panels as agenda setters in a clever arrangement of informative chapters that takes us through different areas of Van Eyck’s achievement. The donor portraits from the altarpiece — the kneeling images of the couple who paid for it — are the focus of a chapter dealing with his portraiture. The National Gallery’s Arnolfini Marriage is not here (shame!), but pretty much everything else is. 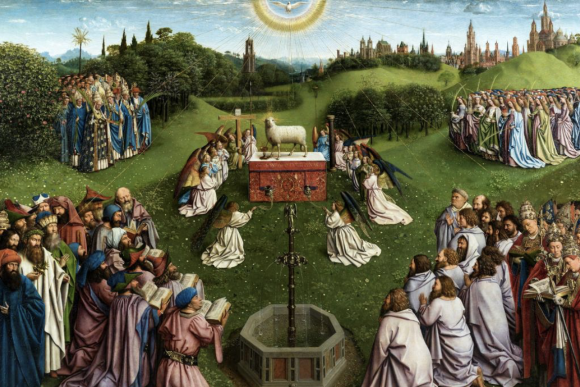 Van Eyck was the first artist to leave behind an utterly tangible record of his world. His faces — donors, friends, figures from the Burgundian court, his stern wife, Margaret — are the first in art you would recognise immediately in the street. From the watery eyes of the sad man remembered in the Léal Souvenir to the pockmarked likeness of Joos Vijd, the mayor of Ghent who commissioned the altarpiece, real people, with real skin conditions and convincing human breath, are making their debut in art.

This could only be achieved with oils. Van Eyck may not have invented the technique, but the uses he put it to were dramatically fresh and revolutionary. Working with softer paints made from pigments that were more finely ground, suspended in light oils that responded more quickly to the travels of the brush, his intensely realistic effects made the stiff portraiture of his Italian contemporaries look thoroughly primitive.

Almost everything here is new information. Because there have been so few Van Eyck shows — one for every 20 events devoted to Leonardo da Vinci — it has previously been impossible to recognise the depth and width of his achievements. Section after section adds important correctives to our image of him.

I have previously thought of Van Eyck as the finest of the jobbing Flemish masters who ushered in the northern Renaissance, but the contemporary documents assembled here provide a surprising elevation of his social status. He was actually court painter to Philip the Good, the Duke of Burgundy, ferociously well paid and often sent abroad on delicate diplomatic missions of European importance. He travelled more extensively, perhaps, than any artist before him — and may even have got as far as Jerusalem on one of his spying bouts for the Burgundians. That’s why his knowledge of Jerusalem’s architecture, displayed so abruptly in The Three Marys at the Sepulchre, is so accurate. 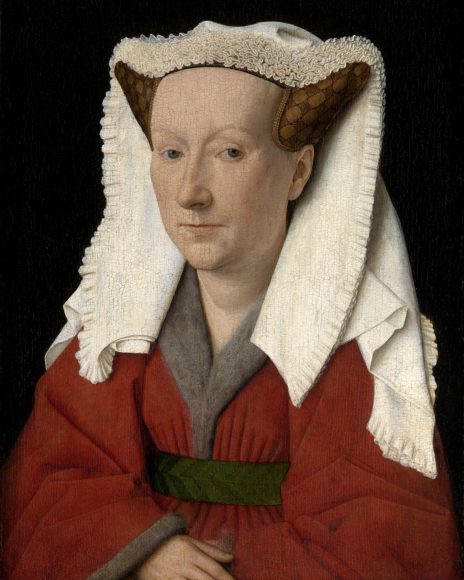 Also uncovered is Van Eyck the scientist: a proto-Leonardo, arrived 50 years early. The cultured court circles in which he moved were stocked generously with naturalists, geologists and astronomers, and he learnt profoundly from all of them. That is why the altarpiece is gardened with about 50 species of recognisable plant, and another 30 that have yet to be identified. It’s why he was the first artist to paint the surface of the moon. Why scientists are able to recognise the exact geological age of the rocky landscape recorded with miraculous precision in one of the show’s standout pictures — the eye-testing St Francis Receiving the Stigmata. Meteorologists recognise his clouds. Birdwatchers recognise his birds.

So there’s a big unveiling here of Van Eyck the insatiable investigator of God’s kingdom. But it was Van Eyck the painter who kept slapping me into befuddlement with the magic in his fingers. The new fluency that became possible with his oil paints, their new ability to describe reality, was more than a change. It was a lurch in art’s tectonic plates.