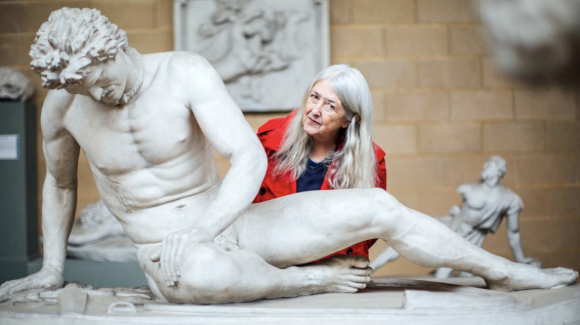 Mary Beard is in the news. Again. For a 65-year-old Cambridge classicist of whom few of us had heard a decade ago, her success at becoming our go-to controversialist on pretty much any aspect of modern and historical living is a brilliant transformation. Mind you, she works hard at it. Those of us fortunate enough to follow her on Twitter are treated to a scarily industrious round of blogs and updates, book signings and foreign trips. She is, most certainly, the hardest working woman in academic showbiz.

So I’m a fan. And it pains me to direct a single word of contradiction in her direction. But her most recent intervention is a film for the BBC about the nude in western art, and that is a subject that must always stir serious emotions. When you start opining about the nude, you reach back as far as humanity goes. So it’s a territory in which you need to tread sapiently. Alas, as the camera pans past the diddy little penis of Michelangelo’s David, Beard gets in touch with her inner Barbara Windsor and warns us she’ll be “sizing up” naked men as well.

Carry on Cambridge, aka Shock of the Nude, is a giggly romp through various ill-fitting fragments of the subject. The Greeks pop up. There’s a life class (in which she poses) and a contemporary artist who strips off in front of curators. We go to a museum in Cork to search for artistic fig leaves. We unveil a Titian.

It’s the line the papers have picked up on as the film’s USP, and that Beard herself, with her usual social media agility, has ensured we are all aware of by noisily tweeting that we must not recognise it as her main line. The old double bluff.

The real problem here is that the nude ought to have a particularly direct relationship with the truth — nothing to hide, and all that — but, perversely, the opposite is true. With the nude you always see what you want to see.

When Beard wanders through the national art collections, she sees a preponderance of reclining females and masculine lewdness. Yet a different wanderer with a different agenda, someone who has not been brought up on Ovid’s Metamorphoses, could walk through these same collections and see the female nudes outnumbered — nay swamped — by scores of undressed men suffering a barbarous sadomasochistic torture.

I am thinking, of course, of all the topless Christs out there, limp on the cross, torsos glistening, their bits lightly covered with wisps of loincloth. If you piled all the global Venuses on one side of the scale and the global Christs on the other, I am confident the crucifixions would outnumber the judgments of Paris.

As I said: you see what you want to see. Which is why the poor old nude is always the first genre to get a kicking when moralists and zealots reach for their bovver boots. And it doesn’t matter what sex that nude is. In epochs of moral frenzy, the male nude is targeted every bit as frequently as the female nude.

Consider Michelangelo and events surrounding his great Last Judgment in the Sistine Chapel. According to the Bible, on the day of reckoning, all of us, saints and sinners, will go naked to face our maker. So Michelangelo filled his final sky with hundreds of appropriately petrified nudes. Alas, Vatican iconoclasts took offence at his theological accuracy and accused him of turning the Sistine Chapel into a “stufa” — a brothel. So they got in another artist to add loincloths to the males in the Last Judgment. Thus Daniele da Volterra earned the unfortunate nickname of “the breeches-maker”.

Of course, not every artist of the undressed refers consciously to the Bible. When Philip II of Spain commissioned a roomful of bedroom nudes, based on Ovid, from Titian, it certainly wasn’t for Catholic reasons.

But what of it? Sex is such a key driver of universal humanity that not reflecting it in art would surely be the perversity. Of course issues of temptation and attraction are inviolate addenda to every nude. The most famous ancient artwork, the so-called Venus of Willendorf, carved about 30,000 years ago, is a pregnant nude. Nudes are ubiquitous because they address issues of fertility, desire and religious plangency that have always been universal. And that is what makes them especially vulnerable to zealots, bigots, moralisers and those who seek to lecture us.

When Protestant iconoclasts began attacking art in the 16th century with their hammers and clubs, nudes were their first targets. The same happened a couple of centuries later when the French revolutionaries reached for the mallet.

And these still dangerous territories deserve something more nuanced than sly boffolas about the size of Michelangelo’s dinky. The last time a female audience took offence at the nudes in the National Gallery, in 1914, the suffragette Mary Richardson took a meat chopper to Velazquez’s Rokeby Venus. It was “the way men visitors gaped at it all day long”, she explained. She later became a disciple of Oswald Mosley.

So, yes, it’s regrettable that the patriarchy produced most of our art, and that the male gaze determined most of art’s preferred subjects. But, hallelujah, zillions of female artists are now in a better position to bombard us with their alternatives. The right chant here is, surely: Bring it on.