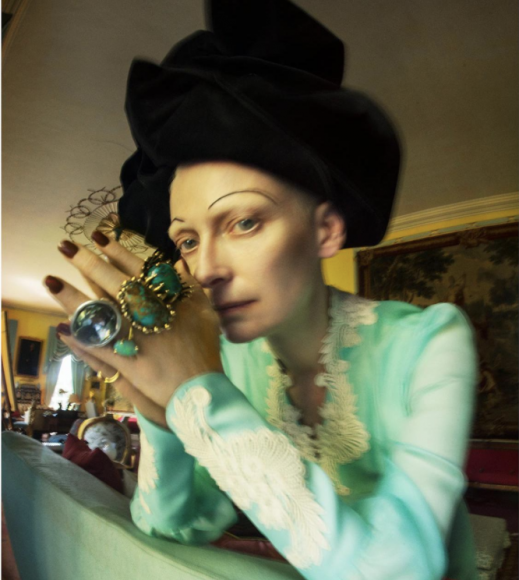 A strange thing happened to me last week. I went to see two different shows by two different artists at two different venues, and ended up feeling I had visited the same event. Not in terms of their texture or quality — one was profound and edgy, the other wasn’t — but in their governing storylines.

Both were mounted by middle-aged men. Tim Walker was born in Devon in 1970. He’s a celebrated fashion photographer who works for Vogue and is renowned for putting his models into fantastical worlds that are a million miles away from the everyday. Mark Leckey was born in Birkenhead in 1964. He’s a conceptual artist who works mostly in video and likes to rub his viewers’ noses in the dingy atmospheres of his formative days as a Scouse wastrel. On paper, two unparallel propositions.

What unites them, however, is a sense of Instagram entitlement that seems to have persuaded everyone alive that the rest of us are fascinated by their life stories. It’s as if the modern world is populated exclusively by ancient mariners — everyone’s dying to unload on you. These two middle-aged men were both lonely little boys, they tell us, seeking to escape from a claustrophobic childhood. And both have now created fake worlds — at considerable expense — into which we, too, are encouraged to escape.

Tim Walker makes that explicit with a doorway into his show, above which is written in glowing neon Wonderful Things. Look down and you’ll see a carpet designed to approximate the appearance of a winding path. The show beyond forms a mansion of many chambers: a suite of rooms, each with a different focus and colour scheme, some dark, some light, some filled with dragons, some painted girly pink, all crammed with photography that appears maniacally determined to run away from the quotidian. What garlic was to Count Dracula, the everyday is to Tim Walker.

The first outpouring is devoted to his commercial work: the international sights that caught his eye; the portraits and fashion shoots he has done for Vogue. There’s Tilda Swinton, of course, dressing up in swathes of fantasy white, always searching for that note of otherworldliness that is her trademark. There’s Kate Moss, of course, getting her kit off at the drop of a Stephen Jones hat, the female Peter Pan, seemingly incapable of growing womanly.

It’s actually some of his best work. Staying within the confines of a commission suits Walker because it forces his imagination onto a diet. David Attenborough clutching the impossibly large egg of a giant elephant bird may be flamboyant imagery by David Attenborough’s standards, but on the Tim Walker scale of extravagance, it barely leaves zero.

For the rest of the show, clarity goes Awol. The V&A has commissioned him to sample what he wants from its collection, and to create new bodies of work responding to these sights. So what we have here is a kid in a sweetshop with what appears to be a limitless budget. Imagine the cover of Sgt Pepper, digitally enhanced so the colours are even brighter. Now imagine you are tiny and someone has thrown you into that world. Giant dolls, stuffed swans, outrageous costumes, more outrageous costumes, smoke, fairies, incense, unicorns — the taps of Wonderland have been opened to full, and torrents of fantastical imagery are pouring out to drown us. Never a pause for sense. Never a pause for silence.

By far the best thing about the journey is the array of V&A objects included in the display. Beautiful stained-glass panels from the English Middle Ages. A gorgeous elephantine chess set from India. A Constable cloud study. Some pages from Aubrey Beardsley’s Lysistrata. If the show encourages impressionable visitors to explore the V&A collections with greater enthusiasm, then it is doing something useful. My problem is that it reeks to high heaven of large budgets and mail-order decadence.

Over at Tate Britain, the grungy Mark Leckey might be expected to offer something entirely different, but he doesn’t. Not initially. You walk into an expensive installation. It takes you to another reality. The imagery comes at you from all sides. Everyone’s chattering, no one’s pausing. The lights go on and off. Fairies appear. So far, so similar. Even the title here — O’ Magic Power of Bleakness — seems to parallel Walker’s. What has happened to the global adult, I found myself fretting? Is everybody playing Game of Thrones?

It got worse. Leckey devotes pretty much all of his art to remembering his childhood, and especially a particularly significant night when he saw a fairy by a motorway in Liverpool. It’s a sight in which he appears still to believe. It haunts him, as it does the show he has created. But it is also here that the differences emerge.

Where Walker’s idea of a darkly imagined chamber of possibilities, with its Addams Family lighting and dodgy aerial dragons, is more Madame Tussauds than V&A, Leckey transports us to the spooky flyover on the M53 where he saw his fairy with an inch-perfect recreation of the looming concrete space beneath which he used to huddle with his pals when he was a grotty Liverpool casual with one O-level and a glued-up nose. As a replica space, it’s convincing. But then, as the modern world keeps reminding us, fake news often is.

In the gloom, it’s possible to mistake it for some kind of ancient burial chamber with towering Stonehenge columns and sloping concrete descents. Liverpool in the 1970s may have been short of romance, but it wasn’t short of creepy urban cave systems in which a big sniff of glue might send you spiralling into the underground.

The multiscreen videos, when they start up, play three of Leckey’s signature works: one new, one from 2015, one from 1999. So it’s a mid-career retrospective of sorts, devised along inventive new lines. All the videos feature the space you are standing in. It has always played a guiding role, the artist explains. Most prominently, it is the setting for the most recent son et lumière, in which a gang of feral Scouse kids weave and chant their way through a manic night under the flyover, fuelled by sniffing brake fluid. Magic, Liverpool-style: from a can.

It all adds up to an hour of increasingly fascinating descent. Down, down, down we go, deeper and deeper into Leckey’s nostalgic rememberings — the throbbing, the all-night swayings, the primitive clustering into gangs of roaming boys. It’s a descent that seems to take us all back to the darknesses of the cave days. Not just Leckey.