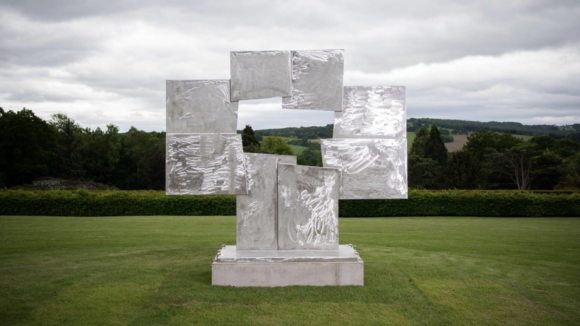 There are many good reasons to visit the Yorkshire Sculpture Park, but two stand out. The first is the respect paid here to the work of Henry Moore: the way his art suddenly looks so right here, so at home. In other circumstances, the poor man seems, these days, to be treated as a bit of a joke. For instance, on the news.

Fortunately, an immediate antidote to this cultural cretinism is available at the Yorkshire Sculpture Park. In Yorkshire, nobody plonks Mark Francois in front of the art, or props their tripods against it. True, the sheep seem to enjoy rubbing their backs on Moore’s work, and if you enlarged their turds to garden-shed size, you would end up with a decent approximation of one of his late bronzes. But even these naughty rhymes feel like an enhancement: a positioning. He’s from here, his shapes are these shapes, the hillsides love him, the skies love him — every Henry Moore at the Yorkshire Sculpture Park feels as if it has come home from across the seas. 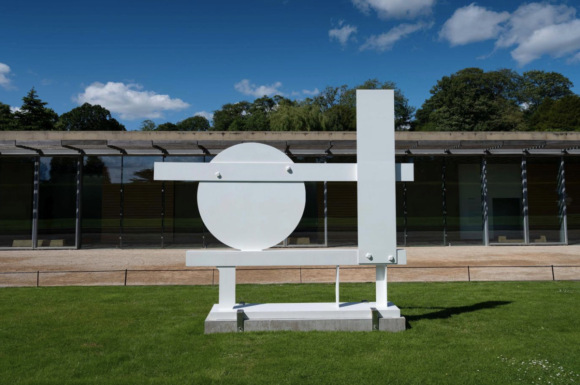 So that’s one reason to visit. The other is to view the ambitious annual retrospective they mount here. It’s always an enjoyable and educative event because it always focuses on one of sculpture’s big hitters. In the summertime, when the weather is fine, the YSP stops fiddling about and gets down to the weighty business of understanding the mechanics of sculpture. This year, that is particularly true, because the chosen focus is on David Smith, the Michelangelo of welding.

Smith (1906-65) is universally recognised as America’s first sculptural giant. Before him, the land of the free had churned out some decent neoclassicists who could knock out a passable bust of the president, but no sculptor of international stature had been born in the USA. Then Smith arrived.

He’s usually presented as an abstract expressionist because his dates coincide with Pollock, Rothko et al. But the others were painters, while he was a sculptor, and that made him immediately different. What Smith brought to the task was a set of skills, attitudes and experiences that had never previously been lavished on his art form. The painters of abstract expressionism didn’t reinvent the wheel; Smith did.

It’s made obvious by the first notable contribution to this generous retrospective, a sprawling weld-up of steel loops, ladders and cross-hatchings, made in 1951 and called Hudson River Landscape. Ha! A landscape made of steel. Isn’t that an inherent contradiction: a fusion of unfusable opposites? Where in the outer recesses of artistic thinking would anyone dream of torching together a metal landscape? Turner would throw himself into Windermere in protest. Constable would kick the nearest horse.

But Turner wasn’t born in Decatur, Indiana, and Constable didn’t make cars at the Studebaker factory in South Bend in the 1920s. Smith’s past was a new type of sculptural past. During the Second World War, he welded together tanks for the war effort at an ironworks in New York. When he moved to Bolton Landing, his famous studio in the Adirondack Mountains, the neighbours would pop in to have their tractors repaired. Smith was different because no artist had previously come from where he came from.

So, yes, an iron landscape, and what an extraordinary sculpture it is. The captions explain that he regularly travelled by train from Albany to Poughkeepsie, and that this is an encapsulation of that 75-mile journey. A sense of motion. Bits of railway track. A sense of looking down on the river below. Shapes flashing by. Fleeting contours of the land. All this has been drawn in space in an exciting and beautiful steel shorthand that floats above its plinth like calligraphy on a sheet of paper. 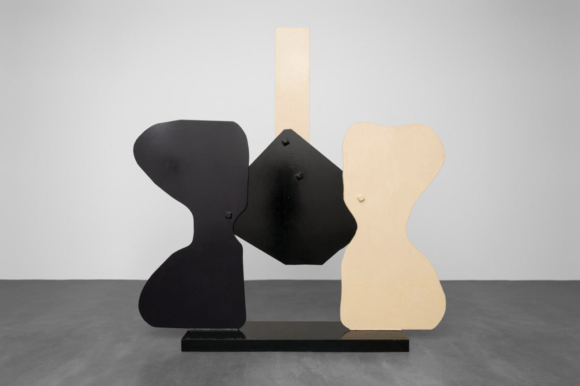 The show has two parts: an indoors and an outdoors. The outdoor works have been scattered about the grounds, where they play shape-games with the surrounding nature. I particularly enjoyed the pieces made of Smith’s trademark polished steel, which darken and lighten, flicker and flare, in a nonstop imitation of ecclesiastical silver. The Yorkshire light loves them, and they love the Yorkshire light.

The indoor pieces are grouped in loose chronologies and fast-forward us nimbly through his story in the lofty underground galleries at the YSP, the ones that feel like the headquarters of a baddie in a Bond movie. Hudson River Landscape dominates a room devoted to his earliest work, 1932-51.

His very first sculptures, made in the Virgin Islands in the 1930s, are tottering figures, vaguely human, assembled wonkily out of things he picked up on the beach: coral and clam shells, bits of driftwood, wire and nails. What he’s attempting is that Picasso trick of magically transforming unwanted bits into extraordinary likenesses. But he’s just starting out, so he never quite pulls it off. Smith was many things, but immediately brilliant was not one of them.

So it’s all a bit effortful. Indeed, it takes him a couple of decades and a succession of badly paid welding jobs in various factories before the blue-collar spirit of industrial America successfully shunts his art into a new siding. At Bolton Landing, he began collecting discarded agricultural equipment — unwanted tools left over from the Great Depression, bits of oil drum, bits of tractor, things for ploughing, things for shredding — and, with the help of his trusty welding torch, began blasting them together into unlikely new formulations.

Blackburn, Song of an Irish Blacksmith is a tribute to a fellow worker at the ironworks. Welded out of steel oddments, it looks like an orrery over which someone has driven a combine harvester. The planets have all been mangled, but the sense of a dancing solar system has survived. Anchorhead, from 1952, looks as if it started life as a hatstand. Agricola IX could surely do something useful in a field.

The gallery filled with these mysterious transformations — so delicate, yet so heavyweight — announces the arrival of a new mood in art. Cocky, handy, muscular, stained with oil, it’s as far away from European exquisiteness as the Ford River Rouge plant, in Michigan, is from the Palace of Versailles. The Rust Belt aesthetics that Smith unleashed on sculpture may have started out as a variety of international surrealism, but they grew quickly into something endemic and powerful.

And the really good news is that he gets better and better. The central gallery filled with his last works, made in the 1960s, is the most dramatic of all the spaces. The faster he got at welding, the larger his art became. And when he started to use colour, his moods managed even to become playful. Though not always. 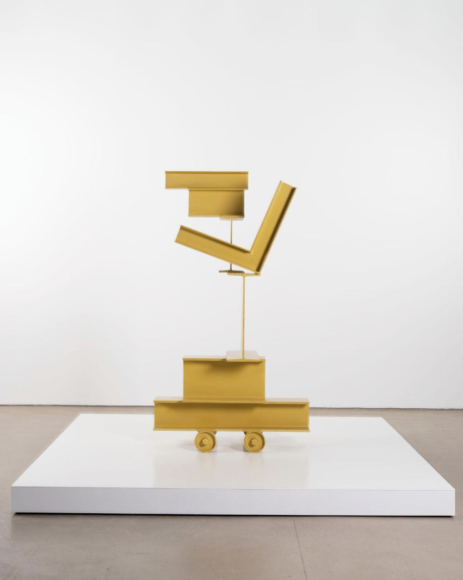 Those crazy ambitions of his to make sculptural equivalents of domestic things — a hatstand, a worktop — reach a climax in the heavy-duty iron chariot from 1964 called Zig VI. It began life as one of his daughter’s toys, but once Smith had finished attaching actual train wheels to it and remaking it in python-thick iron, it had become a war machine brutal enough to invade Troy. You can take a man out of America, and all that…

A helpful film playing in the room next door records the artist asking a group of students 44 key questions about their artistic ambitions. Question 28 struck me as especially pertinent: “Are you afraid of rawness?” he drawls. “Because rawness and harshness are basic forms of US nature, and origins are both raw and vulgar at their time of creation.”

Yup. They sure are.