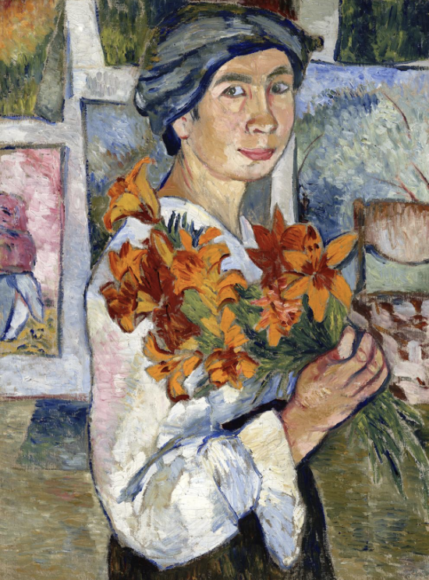 Natalia Goncharova (1881-1962) is one of those artists you hear about but never see. She’s in all the art history books, where her role is recognised as important but interstitial. Most often, she is viewed as a doorway between the old ways of making Russian art and the new ways: an important step between the past and the future. So it’s a crucial contribution, but a short-lived one.

To make it all worse, she is also part of the celebrated art twosome of Natalia Goncharova and Mikhail Larionov, her lifelong partner. When you hear of Goncharova, you hear also of Larionov. So a weak identity is diluted further by a parallel presence. I fully expected the show devoted to her at Tate Modern to save her from this shadowy fate: to present us with a strong and rounded career at last. But it doesn’t. The Tate show arrives with a foggy Goncharova and leaves with a foggy Goncharova.

One of the things that is missing is a concrete sense of her biography. She was 81 when she died in Paris in 1962, so that’s a lot of life to get through. Alas, the Tate loves themes but hates dates, and the urge to confront us with experiences, to create big exhibitions out of lots of tiny ones, results in a journey that careers crazily between the timelines until it does to Goncharova’s progress what a Kenwood mixer does to a bowl of fruit. 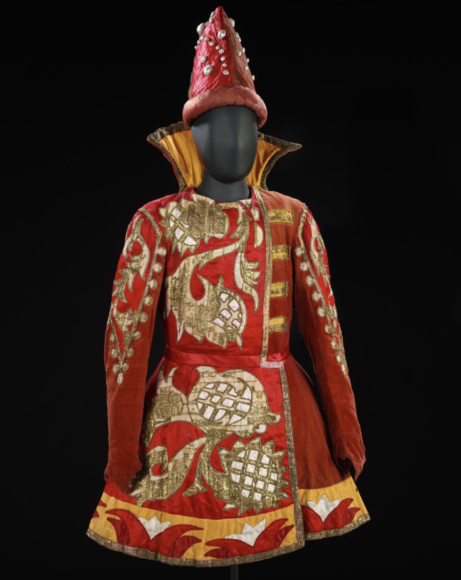 That said, if you pay close attention to the date of every picture and ignore the Tate’s thrust, it is just about possible to discern the outline of a creative talent that is, from the beginning, unstable. Goncharova was born into privilege, the daughter of a minor Russian aristocrat who brought up his children to do what they wanted and to feel superior in the Russian way. There was art in the house: Dad was an architect, so culture was an inheritance. But so was a powerful and loaded nationalism that kept popping up in her art, and sometimes disfigured it.

In the first photo we see of her, she’s with her mother and cousin, posing in peasant costumes on the family estate. The giveaway that it’s all a pretence is the smart city shoes poking out from the bottom of her voluminous peasant dress. She won’t get much farming done in those shoes!

An early self-portrait on a nearby wall, from 1907, shows her in another billowing period costume, her face determinedly sad, as if she’s just reached the last verse of the Volga Boatmen. Painted in a soft and dabby impressionist style, in the manner of early Gauguin, it’s one of the more successful pictures in the show, and provides the first evidence of the game-changing French influences that were swirling now around Goncharova’s Russia.

How she got as good as this at belated impressionism, I cannot say. There’s no whisper of a build-up. And the next room threw me completely. Wow. What a fabulous piece of early cubism of a female figure looking down. Wow. What a confident Cézanne-like landscape of a pulsing forest floor. The first turned out to be by Picasso, from 1909, the second by Derain, from 1913. Without warning, the show had switched to information mode, with a cursory look at the pioneering Russian collectors Ivan Morozov and Sergei Shchukin. 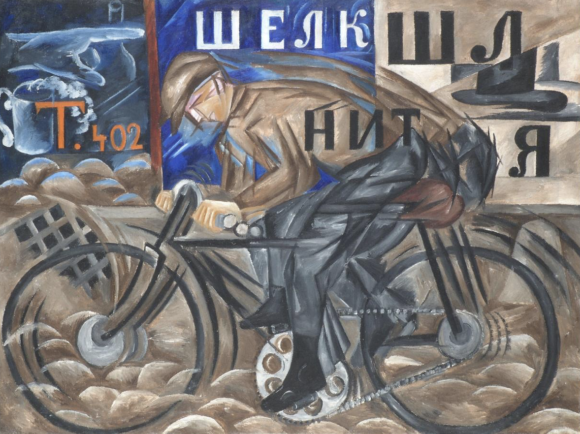 Goncharova’s attempts at cubism are represented by a 1911 painting of two peasants picking apples. It’s charming but slight, the kind of cubism you get when you borrow the simplifications, but misunderstand the purpose. In fact, 1911 turns out to have been something of an annus mirabilis for her, with an extraordinary number of the paintings in the show ahead coming from the same prodigious year.

The next milestone, a huge exhibition of 800 paintings that she mounted in Moscow in 1913, gets a big gallery to itself in the Tate’s serendipitous thematic precis. Filled with a spectacular array of subjects, sizes and approaches, it shows Goncharova dodgeming her way from fashionable style to fashionable style with astonishing casualness. If you shouted “Will the real Nathalia Goncharova stand up?” in here, 10 artists would spring to their feet.

She’s a realist. She’s a fauve. She’s a cubist. She’s an impressionist. And the one tangible thing about her that has been passed down to us — that she was the doorway between the old and the new — is made thoroughly untangible by all this gadfly skipping. Her boyfriend, the kindly Larionov, had a stab at making a virtue out of her artistic busyness by christening it “everythingism”. But the sense here is of uncertainty and shallowness.

It’s an impression that holds in the next few galleries, as we dart across more timelines. Suddenly we’re in Paris in the 1920s, where Goncharova is employed by the fashionable House of Myrbor to design art deco tunic dresses for Parisian flappers. Suddenly we’re back in the First World War, where Larionov is conscripted and wounded, and where Goncharova turns her back on progress with an outpouring of kitsch Russian religiosity. Suddenly we reach the show’s best room, an exciting selection of futurist pictures from 1913 — yup, we’ve gone back again — in which the illusion of a coherent modernist ambition is allowed, briefly, to prevail. 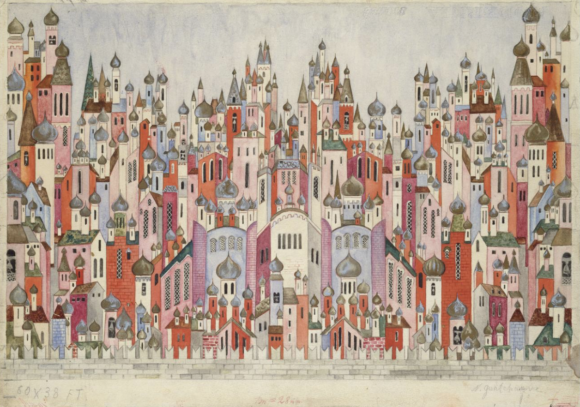 From previous rooms, we know that composition is not Goncharova’s strong point, that she’s better with one figure than with many, and that her touch can be clumsy when she’s in one of her trademark hurries. But the homage to futurism that briefly became her default style in 1913 — Larionov called it rayonism, but that’s like shouting “blue-winged teal!” instead of “duck!” — gave her a ready-made look and a rhythm to work with, and resulted in some of her best art.

The Cyclist is a marvellous evocation of a bike bouncing along some cobbles in a blur of futurist brushstrokes that go up and down as well as forwards. The comedy may not have been intended, but it’s delightful nevertheless. Aeroplane Over a Train features the two most progressive modes of transport of the time forming a futurist sandwich, one on top of the other, like mating sharks.

Amazingly, we are eight rooms into a 10-room show, yet Goncharova is still in her early thirties and has 50 years to go. How are they squeezed into the final two rooms? Brutally, is the short answer. Having spent most of the journey setting her up as a painter who changes her mind, the exhibition lurches onto a new track altogether by unveiling Goncharova the designer.

We see the twee screen, decorated with spidery trees, that she designed for the Arts Club of Chicago. And a showoff final gallery races through the work she did for Diaghilev’s Ballets Russes and the Russian theatre. This theatre room, complete with extravagant costumes, certainly has its moments, but it cannot disguise the fact that an insecure talent has sprinted the first mile of a marathon and then run out of steam.