One of many women overlooked in the surrealist movement, Tanning is now feted with a Tate show of her own 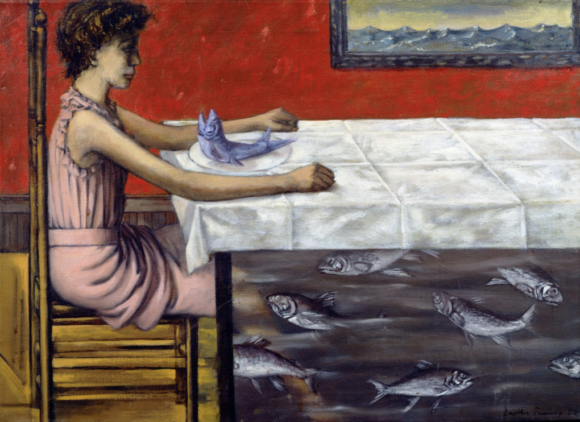 When it comes to producing bad artists, no art movement can compete with surrealism. Surrealism’s fatal cocktail of unleashed desires and a taste for the dark, laced with the flasher’s urge to reveal all, midwifed some regrettable careers. One person’s inner depth is, after all, another person’s laughable kitsch.

It’s a particular issue with late arrivals to the movement. The originators of surrealism, which flourished in Paris in the 1920s and 1930s, needed to invent a new visual language with which to express their inner gunk. It was a big task, and it squeezed true creativity out of them. Their apostles, however, had an easier ride. They had the language, they had the gunk, and needed only to spout it. The later you became a surrealist, the less chance there was of your work achieving a genuine resonance. 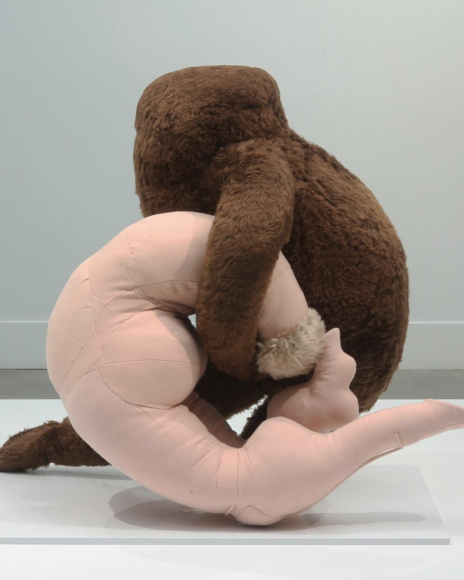 Which brings us to Dorothea Tanning (1910-2012), the subject of an ambitious career survey at Tate Modern. Tanning was an American, born in Galesburg, Illinois, a small town of which she famously quipped: “Nothing happens but the wallpaper.” Leaving behind these imprisoning origins, she escaped to New York, where she worked as a commercial illustrator for Macy’s, the popular department store. In 1942, at a party, she met Max Ernst, the German surrealist who had decamped to America to escape the war. Both were married, he was 52, but when did that ever stop a surrealist? They got together, his direction became her direction, and Tanning, too, became a surrealist.

It’s a life story that prompts wariness for all kinds of reasons. Becoming a surrealist in 1942 is like discovering Abba in 2019: chronically late. Shacking up with Ernst is hardly encouraging, either. A serial seducer of surrounding women, the cadaverous Ernst dominated every relationship he slunk into. Most unfortunately of all, Tanning’s circumstances place her in the ranks of that unlucky breed: the forgotten surrealist woman. Like Leonora Carrington (another Ernst victim), like Leonor Fini, like Dora Maar, she was unfairly overlooked in the chronicles of surrealism. Ernst was the chapter. Tanning was the footnote.

To right this wrong, the distaff voices that dominate Tate Modern today have mounted a career survey that fluctuates interestingly between the expected and the unexpected. In the first grouping, we can place Tanning’s earliest efforts as a surrealist. Outlandish lurches in scale, nightmarish interiors, the odd monster here and there — it’s very predictable. I was just thinking to myself, “At least she doesn’t paint sinister dolls,” when what should pop up but a sinister doll, bottom half covered in flowers, top half naked, in a painting called The Magic Flower Game, from 1941.

So it’s all a bit Dali, a bit de Chirico, a bit Delvaux. Tanning was another plus-one imbibing the instructions on page one of How to Be a Surrealist: get in touch with your dreams and mimic them. Her initial attempts are mannered and creaky. I was just thinking to myself, “At least she doesn’t paint portraits of a topless Max Ernst rowing across a sea of shit in a blue boat,” when what should pop up but a…

These early impressions, however, prove misleading. The first hint that there is more to her than initially discomforts the eye is a self-portrait drawn in 1936, before she met Ernst. Assured and whispery, it’s a skilled piece of work that pulls you softly into her thoughts. Later drawings, and even the perfume adverts she made for Macy’s, confirm the impression of a sensuous feminine flavour. 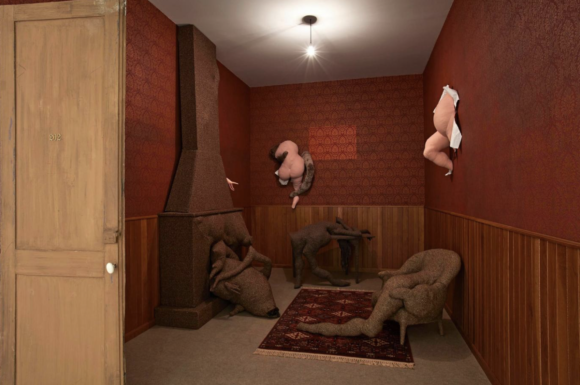 This feminine flavour spends the rest of the exhibition enlarging and deepening. It’s what the forgotten female surrealists brought to the fight: a fresh range of desires, a new array of psychic concerns, a different tranche of anxieties. The first unmissable sign of it is in another self-portrait, from 1942, called The Birthday. Full-length and topless, Tanning stands in a hotel corridor from which open a dozen doors, each of which opens onto more doors. Doors opening onto other doors — as a metaphor for the progress of life — is an instruction found on page two of How to Be a Surrealist. Nothing too different there.

But the self-portrait itself is genuinely weird. Dressed in a costume of purple racing silks and what appears to be a skirt made of seaweed, exposing her breasts to us, Tanning outs herself as one of those attention-seeking identity-thrusters — think Frida Kahlo, think Cindy Sherman — who have come to define women’s art. I also liked the timid little winged monster grovelling at her feet. Later in the show, a selection of photographs of Max Ernst make it easier to recognise him as the grovelling doggy-monster. It’s the hairstyle that’s the giveaway. Go, Dorothea!

These days, surrealism is rightly criticised as a movement dominated by macho and misogynistic practitioners. But the female surrealists were just as persistent. Having found its stride, Tanning’s art unleashes a range of female angers on us that buffet the viewer like the heat from an opened furnace. Children’s Games from 1942 is a tiny painting that lures you in, then smacks you. Two furious little girls, with demented hair, are attacking the wallpaper in a room, tearing it down with a fury that makes Rubens’s Massacre of the Innocents appear peaceful. And look what’s bursting out of the newly revealed walls: thick torrents of body-coloured flesh-lava. I’m not sure I’ve ever seen a more tangible painted tantrum. 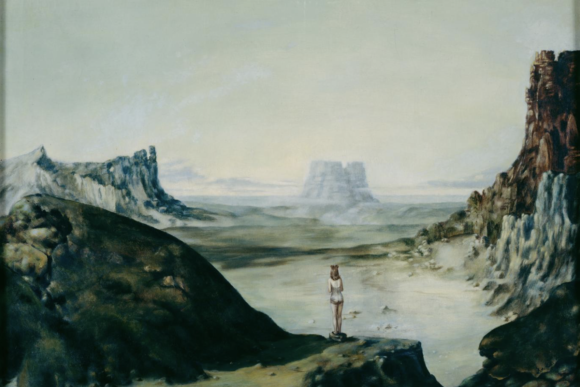 The show ahead resounds with feminine screams. Arranged into thematic clusters, rather than a strict chronology, Tanning’s output has been split into its main obsessions. Doors are one of them. Time after time she paints doors opening onto other doors, or barring our access to the rest of the picture. “What’s out there?” ask these paintings, like creepy moments in a John Carpenter movie.

Apparently, she was a keen reader of gothic novels and particularly enthusiastic about Ann Radcliffe. It shows. Tablecloths are another obsession. As a child, she used to eat with her family around a crisply folded white tablecloth, and it came to represent the claustrophobic order of family life. A clutch of tablecloth pictures, throbbing with unease, search for the hidden darknesses of family life. As late as 1952, in a picture called La Truite au bleu (Poached Trout), she smuggles a writhing aquarium under the tablecloth, and sits there staring at the dead fish that rears up from her plate.

Painting the uncanny must always be an unreliable game. Not everything works for Tanning the surrealist. But a dozen or so of her efforts in the field are strikingly distinctive and memorable, and that’s a good ratio. However, it’s what happens next that is the big surprise.

Amazingly, she lived to be 101. So a huge slab of her career was spent beyond the confines of surrealism. Much of what follows is unexpected. Her first escape is into a style poised between abstraction and figuration, which the Tate has labelled Two Worlds. Instead of describing her anxieties in a legible pictorial language, she begins to evoke them in floaty expanses of crystalline smudginess. I can’t say I liked the results. If Bernard Buffet had been a cubist, he would have painted like this.

Then she got involved in the New York dance world and fell under the influence of George Balanchine, for whom she designed several ballets. Growing immediately bigger, her paintings become pink and billowing, swirling encapsulations of entangled figures, clutching, rolling, tangoing. Again, it’s tough art to like, and occasionally ghastly.

The great virtue of living to 101, though, is that you get lots of bites of the cherry. Just when you give up on Tanning’s career, it bursts into life again with some astonishing developments in her late work. In the 1960s, out of nowhere, she puts aside her paintbrush and begins sewing together creepy figurettes made from thrift-shop offcuts and mattress stuffing. The eyeless blobs that result — wormy, writhing — have a dark and primitive presence, as if they’ve crawled out of a bog and will eventually evolve into humans.

Immediately reminiscent of the textile art of Louise Bourgeois, they are a genuine discovery, a strong ending to a surprising show.