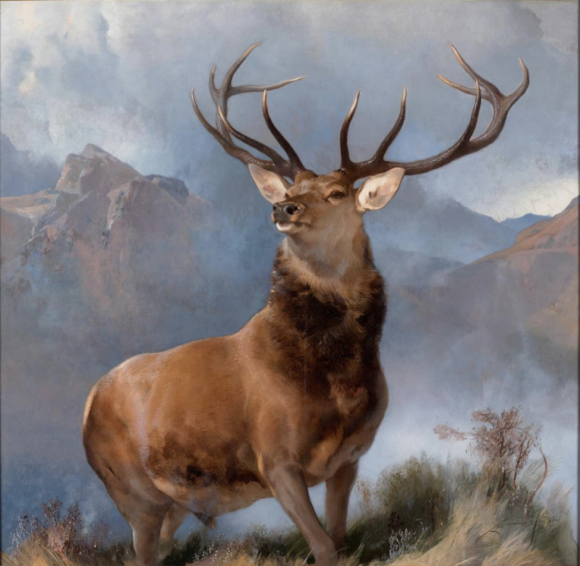 Every now and then I have cause to question why Britain has such a loud reputation as a nation of animal-lovers. It’s not just the occasional ghastly story that emerges of some poor beast chained up at home in its own excrement. I was thinking more of those fat pugs you see, barely able to breathe, waddling across the road in the company of lonely old ladies. Or the tiny lapdogs with pointy noses whose lives are spent poking out of the handbags of fashionistas on the Tube. Britain isn’t a nation of animal-lovers, it’s an island of pet owners, seeking to fill the emotional vacuum in their lives with handy livestock they can pamper and control.

It was, of all people, Sir Edwin Landseer who prompted this unhappy speculation. The most popular animal painter of the 19th century, Landseer has popped up at the National Gallery in an intriguing display centred on his most celebrated picture: The Monarch of the Glen. You’ve probably drunk whisky from a bottle decorated with his image or crunched Scottish shortbread from a tin on which he looms: a noble stag, atop a mountain, staring past us into the distance, dangerously unaware of our intimate and loaded presence.

The Monarch of the Glen was recently the object of a frantic acquisition campaign in Scotland. He was going to be sold abroad by the drinks company that owned him, so the National Galleries of Scotland banged the national drum and raised the £4m needed to keep him in Edinburgh. They have now lent him to our own Sassenach National Gallery, on Trafalgar Square, where he rises up at the centre of a show that seems intent on making something noble and heroic out of the grim and compromised career of Sir Edwin Landseer (1802-1873). 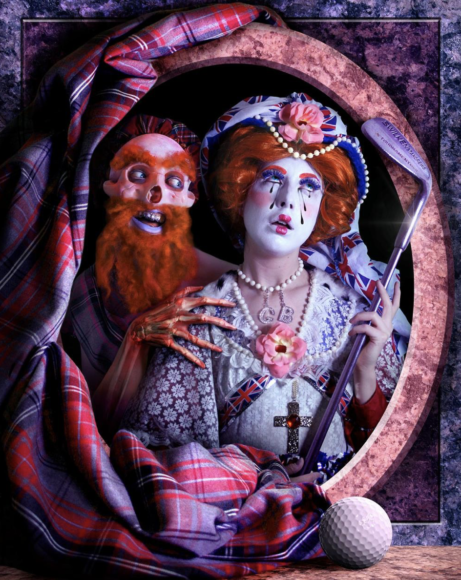 Landseer was a Londoner. Born into a family of jobbing artists, he was a child prodigy who was painting in oils by the time he was 10 and whose work was on show at the Royal Academy when he was 13. Like most children, he loved animals and was an excited visitor to zoos and husbandry collections. Unlike most, he never grew out of it.

Later, when he was moving in royal and governmental circles having greased his way up the societal pole, he perfected a party trick where he would draw an animal with two pencils at once — one in his left hand, the other in his right — Ronnie O’Sullivan-style. He could talk flashily, too, and was much in demand in salons, palaces and castles. Queen Victoria adored him. His tearful spaniels brought in piles of money. And in the 1820s, the Duchess of Bedford, 20 years his senior, appointed him as her toyboy, a position he maintained loyally for 30 years, until her death.

You can see the lusty duchess in a hunting scene included here, where she stands next to a little boy with a fishing rod — perhaps the child fathered by Landseer — while her husband slumps over the body of the deer he has just shot and her brother loads another dead stag onto a horse. Everyone in the picture is heavily tartaned up like a box of shortbread acquired on the Royal Mile, in Edinburgh, even though they all come from London.

Landseer was madly in love with the Duchess of Bedford, but she wouldn’t give up her high-ranking marriage, so on and on he suffered, like one of his mournful Labradors. As the interior torturings grew fiercer, he began guzzling booze and laudanum. In 1840, he had a nervous breakdown from which he never properly recovered. In 1872, his family had him declared insane. The next year, he died. And all the while he continued to paint comic greyhounds in top hats and eager doggies standing guard by the failing bodies of their masters. All these Landseer beasties, including The Monarch of the Glen, can and should be recognised as human surrogates. It could hardly be more obvious.

The National Gallery, conscious perhaps that it is dealing with a painting that has launched a thousand biscuit tins, tries to graft seriousness onto its subject by presenting him as a determined animal scientist. Included here are early sketches of the muscle systems in a dog’s paw and his copies of George Stubbs’s brilliant anatomies of a horse. 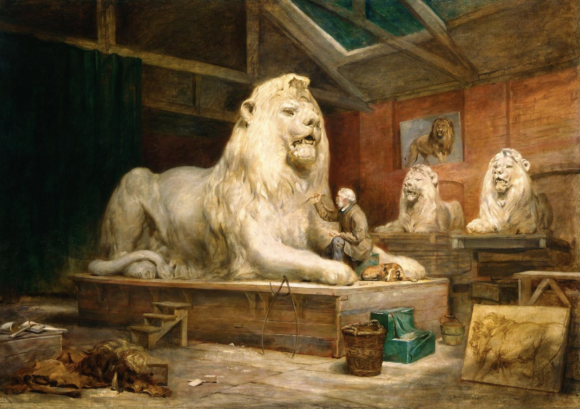 All this is given extra pertinence by the presence on Trafalgar Square of the famous lions guarding the foot of Nelson’s Column. Made late in Landseer’s career, 1858-67, in the years of creeping madness, they were his only sculptures, and their creation was long-winded and tortuous. At one point, he brought a real lion into his house in St John’s Wood so he could live with it and study it more closely. Thus a real lion in an unreal situation ended up modelling for the imagined English spirit.

The square format is unusual and has the effect of positioning the great stag just above us. If he fell, he’d knock us over. Standing on top of a foggy mountain, picked out miraculously by the sun, he doesn’t just loom. He lords. Interestingly, his mighty antlers have 12 points, and, by including a Landseer drawing of the crucified Christ in its preamble, the show points vaguely but cunningly to a deeper religious meaning.

Stags shed their antlers every year, then grow new ones, so they have long been a handy stand-in for the resurrected Christ. The mad Landseer, with his taste for occult meetings and Catholic mysteries, would certainly have been aware of this mystic significance. How directly he intended it to be noticed here is uncertain, but the deliberate way the stag exposes his chest and neck to us feels loaded: how easy he would be to shoot and kill. Thus, a powerful sense of sacrifice swirls and swells in the Highland fog.

Still on a Scottish theme, and with some continuing Brexit resonance, a film piece by Rachel Maclean called The Lion and the Unicorn has also gone on show at the gallery. Commissioned in 2012 as part of the Diamond Jubilee “celebrations”, The Lion and the Unicorn is a costume farce in which the merrily disrespectful Maclean takes the mickey out of England’s wobbly relationship with Scotland.

The film has three characters in it, and Maclean, who is clearly mad keen on dressing up, plays all of them. First, she is the Queen, delivering what feels like a Christmas broadcast about the intertwined history of the two nations. Then, having animated the heraldic beasts on the coat of arms of the United Kingdom, she is both the English Lion and the Scottish Unicorn, squabbling drunkenly over their break-up while sipping North Sea oil. If the voices of the beasts sound familiar, that’s because Jeremy Paxman is the sneering Lion and Alex Salmond the mumbling Unicorn.

It’s reasonably good fun. By bringing in elements of children’s television, Spitting Image and Passion plays, Maclean is certainly expanding video art into new territories. But the fun she has switching costumes tends to overwhelm the political messaging. In the end, it’s more slapstick than bite. You’re hoping for Animal Farm, but you get You’ve Been Framed!.

Landseer’s The Monarch of the Glen and Rachel Maclean: The Lion and the Unicorn, National Gallery, London WC2, until Feb 3