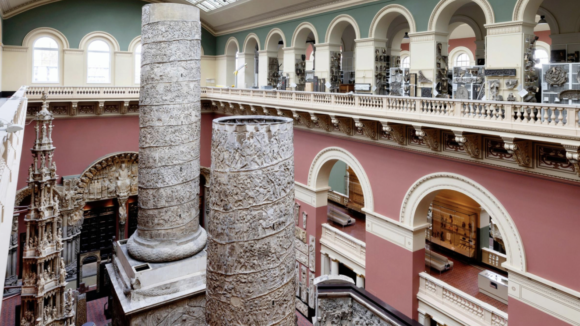 Karl Marx got it right. “All that is solid melts into air, all that is holy is profaned,” he lamented in The Communist Manifesto. Marx wasn’t actually thinking of this year’s Turner prize — 4½ hours of dimly flickering video, in front of which we can slump like a society of armchair dads dissolving into twilight. He was thinking of the capitalist future. But he got the Turner prize right as well. Soon there will be no need for art galleries at all. We can just pipe the videos straight into our brains and lie there in our hospital beds, conceptualising the meanings while all that is solid melts into air.

Excuse the glumness. It isn’t just that this year’s Turner is so wrist-slittingly weak and bleak that there’s no point celebrating a winner. It’s also that I have just returned from experiencing the new Cast Courts at the V&A, and they were so big, so thrilling, so actively tangible and physical, so transparently full of skill and ambition, so much about what art should be about when it deals in solids not in voids. 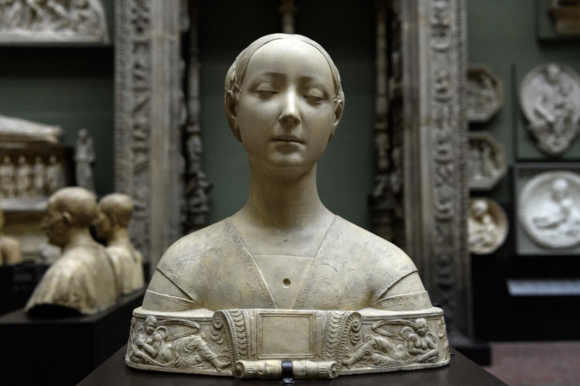 The Cast Courts have been closed for years. Exactly how many I cannot say, because the seemingly endless reconstruction of the V&A has blurred the clock face. But they were actually part of the original building when it opened in 1873: a set of spectacular rooms created specially to house the museum’s enormous collection of plaster casts of famous sculptures and architectural highlights from around the world. Oh look, Michelangelo’s David. Oh look, Trajan’s Column. Oh look, the entire front of the cathedral at Santiago de Compostela. Wandering into the newly reopened Cast Courts is like blundering onto the set of an Indiana Jones movie — all these celebrated ancient wonders looming up around you, in a suite of spaces engineered on the soaring scale of Paddington station.

Originally, their task was to share the delights of international art with a wider audience. Where a real trip to Rome or Madrid or Augsburg was available only to the privileged few, the wonders of the Cast Courts were available to all. And because the V&A saw itself as a teaching foundation, a collection that would inspire better design in Britain, the range of things gathered here was conspicuously wide: from early Christian crosses to the doorways of Islamic palaces; from Viking churches to medieval porticos; from the mosaic decorations of Ravenna to Nicola Pisano’s remarkable pulpit from Pisa. What a goodie bag!

Plaster casts actually have a chequered history in the culture wars. They used to be highly valued: an extreme test of skill, ingenuity and engineering. I simply cannot imagine how anyone ever managed to produce a full-size replica of Trajan’s Column, in Rome. It’s 120ft tall and contains more writhing warriors than Waterloo station at rush hour. How did they get up there to record all those Romans fighting all those Dacians in AD113?

Or what about the fabulously twisty Apprentice Pillar from the Rosslyn Chapel, near Edinburgh, to which Tom Hanks followed his “symbologist” nose in The Da Vinci Code? We find it here embedded in half a church, so busy with details it throbs and sways like a coral reef. What kind of process can record all that? The Cast Courts may originally have wanted to democratise access to the world’s artistic wonders, but today they inject big doses of undiluted wow factor into the bloodstream of the V&A. 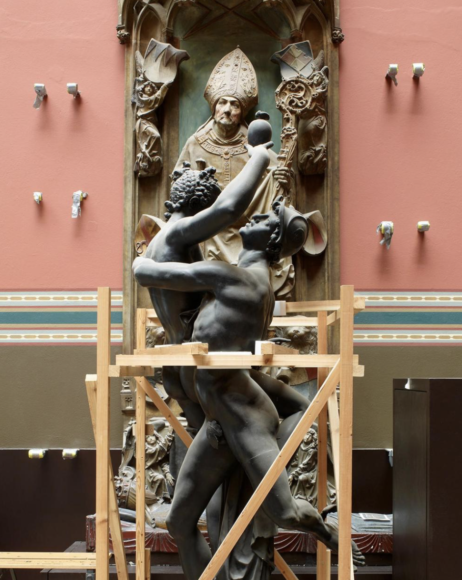 Unfortunately, later generations came to identify these exciting Victorian replicas with the old ways of teaching art: with the dutiful copying of the past. As the 20th century progressed, plaster casts fell out of favour. Most important museums used to have wide selections of them; most important museums decided at some point in the 1960s and 1970s to get rid of them. The V&A’s superior collection, in its original location, is a rare survival.

In fact, the full-size replica of Trajan’s Column was so big that it needed to be cut in half to fit into the building, and it is displayed here as two towering uprights, both of which feel unfeasibly huge. Back in the 1990s, when I was at Channel 4, long before the rise of internet dating, we made a film about how art galleries had become favourite locations for chat-ups. It turned out that Trajan’s monster had a secret room hidden in the base, and that this inner sanctum was a popular location for the climax of these gallery flirtations. A shocking number of volunteers confessed to joining the artistic equivalent of the Mile High Club beneath the madly thrusting Dacians!

So plaster casts are multi-purposeful and can do many jobs. These days, the days of fake news and dial-your-own realities, they offer a handy test of truth and its confusions. I defy anyone who stares up at the V&A’s plaster David to feel substantially less impressed than they were by the original. It’s the same size, the same texture, with the same veiny details. Only its new context — a room packed relentlessly with marvels of the Italian Renaissance — seems actively different from the real David in the Accademia in Florence. (Oh, and the giant plaster fig leaf on show at the back that was attached to Michelangelo’s hero whenever royalty came to visit. No one wanted to scare the queen with a perky Renaissance penis.)

Michelangelo does well here. The Victorian taste for him ensured that a beefy army of his best-known sculptures climbed onto the pedestals. The famous Moses from the tomb of Julius II is here, making us feel guilty with his withering biblical stare. A couple of the unfinished Slaves from the same tomb are here, twisting sexily and looking more complete in plaster than they do emerging fuzzily from their original blocks of marble.

While the exhibition halls of the Cast Courts are filled with a busy mix of great art from the great epochs, a smaller gallery running between them contains a helpful guide to the techniques used to achieve all this devilish authenticity. The ingenuity of the Victorians was unleashed in full on the task of making copies. For statues and architectural slabs, they used plaster casts. For bronze doors, like Ghiberti’s great Gates of Paradise from the Baptistery in Florence, they preferred cutting-edge electrotypes. 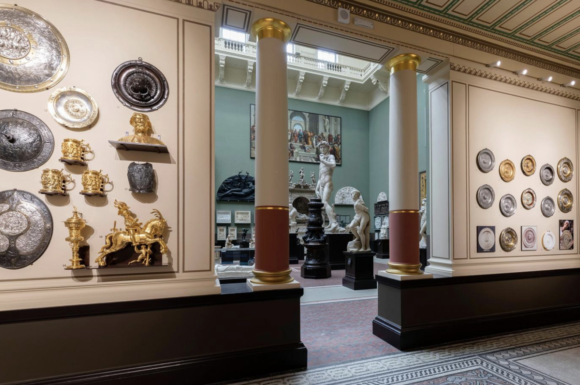 So exact were these copies that they supply valuable information today on the deteriorating originals. The crispness of the warring Dacians on Trajan’s Column may have disappeared from the polluted surfaces of the real thing rising above the Forum in Rome, but it is still preserved in the replica. It’s the same with the Irish crosses of crumbly stone that loom up next to a German imperial lion. Or the Viking doorways from ancient Norway, carved into impossibly intricate patterns on perilously flaking wood.

Another role for the Cast Courts, in the world of fake news and unfixed identities, is to remind us of the unreliability of appearances. As ruminations upon issues of authenticity and reproduction, they could hardly be more timely.

But that isn’t the best thing about them. The best thing is how happily your senses are duped by them, and how enthusiastically they respond to the deceit. Walking in here and seeing half a cathedral rising above me to sequoia height prompted floods of unbeckoned awe in me. This is size doing its thing. No photograph, no film, no computer graphic can act on you as viscerally as a good plaster cast. As Wordsworth noticed in his great poem The Prelude, when he measured himself against the looming bulk of the black mountain, we are but tiny microbes in the larger scheme of things. Sixty feet of indoor cathedral make that instantaneously clear.

Thus the exciting contents of the Cast Courts manage even to act as a handy antidote to social media. If the true evil of social media is that it enlarges our sense of self so grotesquely that we imagine the world turns around us, the glory of the Cast Courts is that they dwarf us with the achievements of the past, remind us of our historic unimportance and put us properly in our place.

Also, they are great fun to wander through. As for the Turner prize, poor Charlotte Prodger must now spend the rest of her sunken career branded as the “winner” of the most tedious Turner there has been. Art can be so cruel.