You must have seen the moment. It was a delicious one. Just as the bidding closed on the last lot at Sotheby’s enormously successful sale of contemporary art last weekend, an alarm began bleeping in the room, and Banksy’s Girl with Balloon, one of his most celebrated pictures, began descending through its frame before re-emerging at the bottom, shredded. Oops!

The sale in London had already fetched £68.7m, and someone had just bid £1.1m for the Banksy. Now, before everyone’s eyes, the picture was being destroyed. A befuddled auctioneer began calling for some technicians. The audience stopped its chatter. And Banksy himself, who was surely somewhere in the room, pressing a remote control, would have tried to look casual as the giggling commenced inside him. He’d done it. He’d pulled off his best wheeze yet. He really was the Scarlet Pimpernel of art.

This being 2018, the whole thing immediately began playing out further on social media. All manner of trolls took to the ether to accuse someone somewhere of insider knowledge. If Sotheby’s had checked the frame, surely it would have found the shredder. If Banksy had really meant to destroy the picture, why did the shredding stop halfway?

Alex Branczik, head of contemporary art at Sotheby’s, was out of the blocks quicker than Usain Bolt. In big black letters on his private Instagram account he put up Bette Midler’s famous retort to grumblers: “F***em if they cant take a joke.” If going on Instagram and sounding like a 19-year-old graffiti artist from Croydon was what it took to ensure that Sotheby’s came out of the encounter better off than it went into it, so be it.

Girl with Balloon was still swaying in bits in the wind when Sotheby’s announced on its website that what we had just witnessed was history being made. The destruction of the Banksy “marked the first time a piece of live performance art had been sold at auction”. This wasn’t art being destroyed. This was art being created. Oh, and the picture wasn’t called Girl with Balloon any more. Since the girl in the picture had been shredded, Banksy’s artwork was now called Love in the Bin.

What’s more, the buyer, an anonymous European collector, remained delighted with her purchase. “I was at first shocked,” she sighed, “but gradually I began to realise that I would end up with my own piece of art history.”

So what really happened on that naughty night? What were we really watching?

According to the Sotheby’s catalogue, “the anonymous graffiti artist known as Banksy is perhaps the most controversial street artist of today”. No arguments there. By adopting the gimmick used originally by the masked wrestler Peter Thornley, who restyled himself Kendo Nagasaki, and whose fights consisted chiefly of people trying to pull off his mask, Banksy, whose real name is Robin Gunningham and who hails from Bristol, has managed to make himself internationally famous by remaining internationally anonymous.

One of the main ways Banksy has made himself so prominent is by skilfully adopting the Donald Trump approach of using social media to soar above the heads of the official news channels. In a video posted on his Instagram account straight after the Sotheby’s sale — which has been watched by more than 3m viewers — Banksy tell us that he put the shredder in the frame “a few years ago” in the hope that the picture would one day come up for auction. In what purports to be archive footage, you can see a hooded figure inserting the shredder in the frame, and then covering it up with a panel. 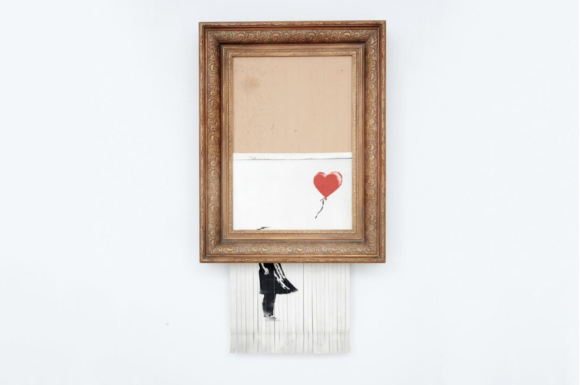 Those who insist that Sotheby’s was in on it and that the conservation department at the auction house would have found the shredder clearly do not know how conservation departments work. Someone may have checked the image to see it was clean, but no one would have checked the frame. Besides, every Banksy coming to auction needs first to be authenticated by Pest Control, the official Banksy authentification arm. Girl with Balloon must have passed the test. That done, Sotheby’s would have had no reason to suspect anything untoward.

The big giveaway here is the date of the auction. October 5 is the middle of Frieze week. Since its inception in 2003, the Frieze Art Fair has successfully turned the buying of contemporary art into a spending contest.

By flying in billionaires from around the world, Frieze has transformed the way art is bought and sold in Britain. By picking Frieze week for his wheeze, Banksy was picking the best date on the calendar.

The footage of him inserting the shredder could have been shot any time, and surely was. And although we’ve heard from the buyer, there hasn’t been a squeak from the vendor. Whoever it was may indeed have bought the picture innocently, “a few years ago”, but it’s more probable that they didn’t. If we’ve learnt anything from Banksy’s pranks over the years, it is that he leaves nothing to chance.

So the timing of the sale tells us that Banksy’s ambition here was to highlight and mock the transformation of art into a gewgaw for the rich. By publicly shredding his Girl with Balloon at Sotheby’s, the Robin Hood of Bristol was hoping to poop mightily on the art market.

But the art market has been at it a lot longer than he has, and the result of the great shredding is that the picture is now worth more than it fetched on October 5. A lot more.