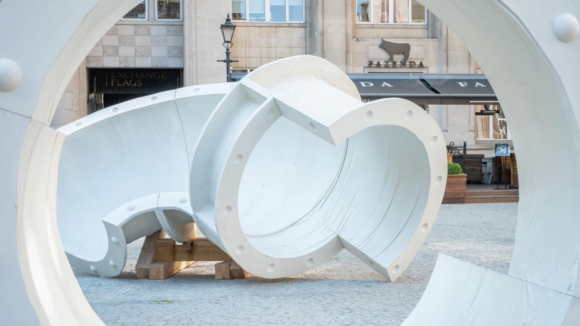 From the start, this welcome event has been a true achievement. Where other biennales gathered up the art stars, hired the usual bunch of air-miles curators and found somewhere glamorous to fly them, Liverpool has always attempted something different. Since the first biennial, the artists exhibiting here have been relative unknowns, gathered from distant corners of the international art world and unleashed on the Merseyside public with ambitions that were genuinely apostolic. Liverpool wanted to change things.

Those of us who remember the first show, when the smoke from the Toxteth riots could still be sniffed in the torched buildings you walked past, can vouch for the biennial’s transformative efficacy. One of its best pleasures has been the opportunity it offered to explore unlikely new venues — the old post offices, the forgotten shipping halls. This was art acting as a magnifying glass through which we could view Liverpool’s unfolding urban story and, by extension, the unfolding urban story of post-millennial Britain. 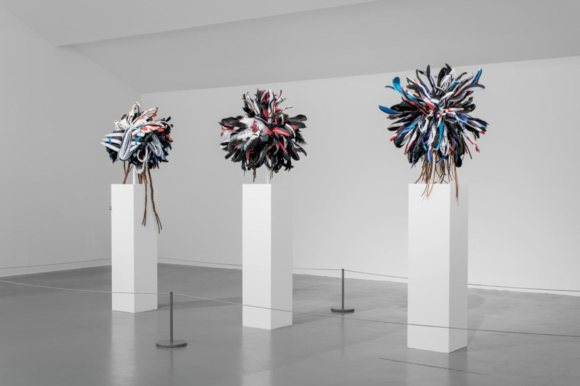 The 2018 edition continues this approach, with a cast consisting largely of international debutants — 44 of them, from 22 countries — whose work is scattered across more than 20 venues. These days, tracking them all down is less of an adventure. In today’s Liverpool, the post-millennial development is largely over. And Liverpool has become more like everywhere else.

So there is extra pressure on the organisers to come up with a distinctive theme for their show. And I think they have done rather well. Taking a line from a poem by Friedrich Schiller, the German poet and philosopher who stood alongside Goethe in championing the achievements of the ancients, the 2018 curators have come up with Beautiful World, Where Are You?. Translated into a purer Scouse, that means something like: “We’ve f***** up the world, wack. So what do we do now?”

Schiller’s poem, from 1788, lamented the passing of the Greek gods and their glorious classical age. This Liverpool version seems more generally to be about the coarsening of everyday life: the despoliation of nature; the rise of nationalism; the loss of goodness.

The colonising power of contemporary banality is the message as well of Brian Jungen’s Native American headdresses. From a distance, they look like the kind of clobber the Indians used to wear in John Wayne movies. When you look closely, though, you realise they are made out of the soles of old trainers, not eagle feathers. Where have all the feathers gone? Gone to Nike, every one. 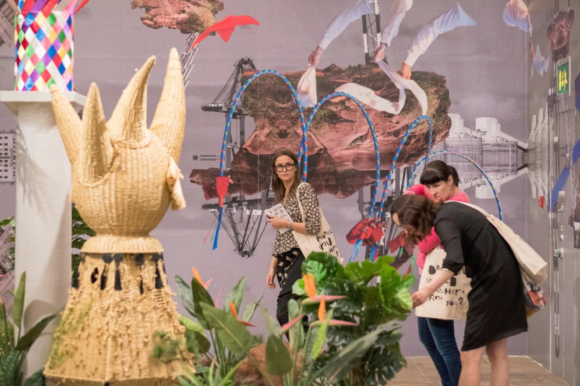 This lament for a lost past is a common sound at the biennial. At the Open Eye Gallery, the Nigerian photographer George Osodi gives us a spectacular gallery of Nigerian kings whose modern role is entirely ceremonial, but who pose for the camera with a dignity and a haughtiness inherited from an earlier epoch.

Here and there, the show’s eagerness to imagine a nicer future gets a bit silly. At Tate Liverpool again, the giant installation by the Korean artist Haegue Yang feels like the setting for one of Elvis Presley’s Hawaiian movies. Scattered about some pretend tropical islands, covered in pretend ferns and palm trees, are a set of straw sculptures modelled loosely on Polynesian tikis. The wallpaper that completes the installation is packed with scenes of Morris dancers, clapping and fluttering their hankies as if to applaud all this terrifying naivety. “Say farewell to toil and work a day/For the dance will drive all cares away” and all that.

Yang’s flowery optimism reminded me of something. It took a few more exhibits at a few more venues to recognise it fully. The lightbulb finally pinged in the communal garden that Mohamed Bourouissa has created with local schoolkids in a joyless stretch of Liverpool 8. The new art garden, with white sculptures and desert plants, has an atmosphere of flower power about it. Hippie moods are back. All this biennial needs is for John and Yoko to pop up with one of their Bag-ins and we could be in 1969 again.

At the Bluecoat gallery, in another of the larger shows, Ryan Gander has been working with more schoolkids, from Knotty Ash Primary School, finding wacky ways to design benches for the urban square at the back of Liverpool Cathedral. Using methods “from the Montessori method of education”, the kids were given geometric puzzles to play with before arriving at their unlikely final shapes. The whole process was filmed and the happy kids, with their gorgeous Scouse accents, are unstoppably delightful. Over at the cathedral, meanwhile, the finished benches are excellent evidence of Montessori creativity, but terrible for sitting on.

A little further up the road, the Victoria Gallery & Museum has also been roped into biennial service for the first time. Designed by the celebrated gothic revivalist Alfred Waterhouse, it’s one of those stubbornly gloomy 19th-century interiors, filled with murky tiles and looming staircases, that feels candlelit even when the LCD displays are turned up to full.

Inside, some forlornly stuffed animals — a sloth, an anteater — have been tasked with reminding us of the awful things we have done to nature. It’s another of the biennial’s repeated messages.

At the Central Library, a magnificently cobwebby bibliophile location straight out of an Indiana Jones movie, a copy of Audubon’s magnificent Birds of America has been put on special display to remind us sharply of our expulsion from Paradise. 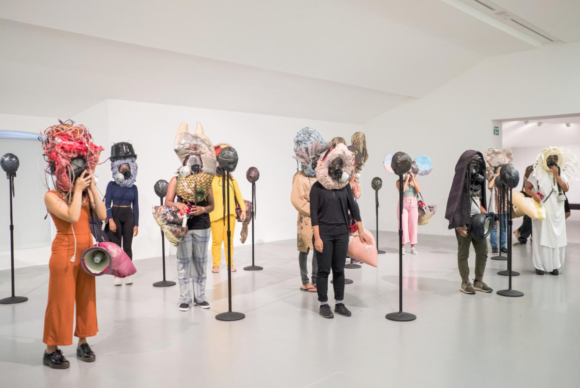 Featuring what seems like a smaller than usual battalion of artists, selected by just two curators, this is a biennial I will remember for its emotional warmth and the consistency of its message. Trekking around the various locations is good fun, as usual. Finding them is half the pleasure. What’s missing is wow factor. There are lots of interesting contributions, and scores of well-meaning ones, but not many that make the pulse race.

Unusually, the best artistic contributions come from film-makers. Especially at Fact, the film and video centre that has generally provided the biennial with its doziest afternoon stretches, but which this year gets my vote as the most rewarding venue.

Two films stand out. The first, by Mohamed Bourouissa again, is a rousing documentary about a gang of black cowboys in North Philadelphia who patrol the ’hood on horses saved from the slaughterhouse. Just for a moment, if the light is right, time rewinds 100 years and we’re Tardis-ed back to a more stirring American age.

The other film, Ulysse, is by the veteran French film maker Agnès Varda, pioneer of French new-wave cinema. In 1954, on a desolate beach in France, she took a spooky photograph of a nude man, a small boy and a dead goat. Who were they? Why were they there? Decades later, Varda returns to the scene and investigates the bleak circumstances that brought it all together. The results are sad, emotional and riveting. Beautiful world — were you ever really there?

As always, the John Moores exhibition, Britain’s leading painting prize, has also opened in Liverpool. In the past, the show has often looked out of step with contemporary aesthetics. But painting is currently enjoying an avant-garde revival (as the Bloomberg New Contemporaries exhibition of student art also proves). So there’s a buoyancy to this year’s John Moores. It’s brighter and jauntier than usual. Easier to like.