Tate Modern’s revelatory Picasso exhibition shows how his muse, Marie-Thérèse Walter, inspired him to stretch the possibilities of art 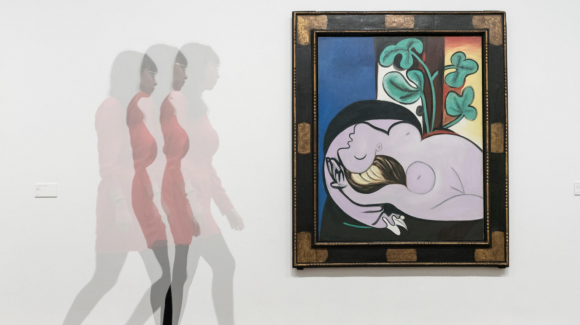 Back in 2001, I had the privilege of making a television series with Sir John Richardson called Picasso: Magic, Sex & Death. It was a privilege because Richardson’s biography of Picasso, the first volume of which had been published in 1991, was by some way the best biography of an artist I had ever read; more than that, it was, and is, in my opinion, one of the greatest books about art ever written.

John’s history with Picasso — they’d been neighbours in the south of France in the 1950s — made him a unique resource. Through his unparalleled contacts with various members of the Picasso circus, we were able to gain access to people and places that would otherwise have been impossible to reach. And he was such a brilliant presenter: a TV natural, oozing charm and insight.

So, yes, it was a privilege. But it was also a nightmare. When you enter the world of Picasso, you enter a warzone of competing intimacies and egos. Everyone wants a part of him, and the scramble to possess that part had created a bear pit of neurosis and suspicion. There were many arguments. The most puzzling of these concerned the position and worth of Marie-Thérèse Walter, the voluptuous young mistress whose image and presence dominate Picasso 1932, Tate Modern’s riveting investigation of a year in the life of the satyrical Pablo.

John didn’t have much time for Marie-Thérèse Walter. “She was only the gardener’s daughter” was his favourite dismissal of her. He was a Dora Maar man. And, having passed on Maar’s wicked observation that every time Picasso changed mistresses, he changed styles, he put in place a prism through which Picasso’s art could for ever be viewed. Marie-Thérèse was, I felt, too sensuous for him. Not intellectual enough. As a gay man, he was, perhaps, immune to the intense artistic beauty of the sun-ripened muse who dominates this exciting Tate display. 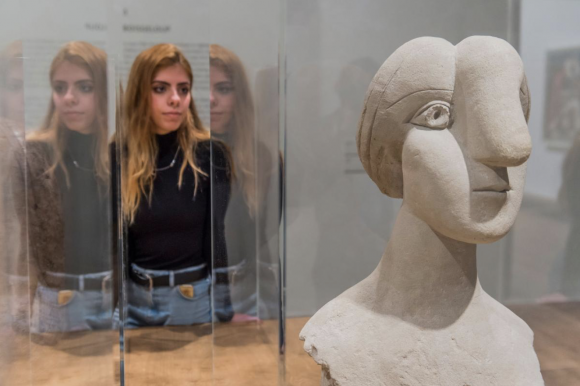 There are many intelligent reasons why this is such a good show. But there are also unintelligent, basic, primal, Picasso-like reasons. Chief among these is the startling evidence offered here of how Marie-Thérèse’s body — its roundels, its mounds, its hollows — triggered a sculptural revolution in his art. The sensational facts of his relationship with her — he met her when she was 17, smuggled her into the house behind his wife’s back, sneaked off on holidays with her — are certainly not what elevate this show to its rare heights. What elevates it is the big artistic moment at its centre in which painting and sculpture and human reality fuse dramatically into an envelope-stretching expansion of the possibilities of art.

Famously, Picasso insisted that his art was a diary, and that it could be read as autobiography. Which is why he began precisely dating his work with the day on which it was created. What we have here is a year of his output — 1932 — unfolding from day to day, month to month.

We actually start on Christmas Day, 1931, with a scary little picture called Woman with Dagger, in which a diminutive masculine blob is being stabbed by a large feminine one. It’s based, loosely, on David’s Death of Marat, in which the French revolutionary is shown dead in his bath, having been stabbed by Charlotte Corday. Richardson’s contention is that Picasso’s Christmas Day response records a crucial psychic rupture in the household. Although married to the Russian ballerina Olga Khokhlova, Picasso had been seeing Marie-Thérèse for several years. And it is tempting to imagine that Woman with Dagger refers in some instinctual way to the conflict that had developed between the three.

What happens next, however, is the opposite of conflict. The show may start with stabbings in the tub, but the moods that follow feel initially like a delicious sinking into a fragrant bubble bath. Olga disappears from the story and it is Marie-Thérèse, with her soft and pastel-coloured artistic presence, who assumes the muse duties as Picasso begins the stupendous year of artistic activity celebrated in the journey ahead.

At first, he is unsure how to record her. For most of January, she’s a soft and floaty presence: an angelic blonde, colour-coded in pale blues and delicate pinks. At the end of the month, she hardens briefly into a totem of dark African woods. By February, she has become a fruit bowl filled with ripe peaches, or maybe that isn’t actually her, anthropomorphically summarised. Picasso seems to be trying out different Marie-Thérèses like a man rifling through his wardrobe.

Most of the time, he paints her asleep. As a result, harsh judgments have been made about his voyeurism and her submissiveness. But in this context, the repeated sleepiness comes across as a still contribution to a frantic moment. The sleeping Marie-Thérèse is, above all, an incredibly useful stationary presence. By remaining reliably immobile, she allows an artistic battle to rage on Picasso’s side of the easel as he experiments and riffs with touches, flicks and distortions, cheeky rhymes and exuberant colour combinations. The sense here is of lots of work, not lots of sex. 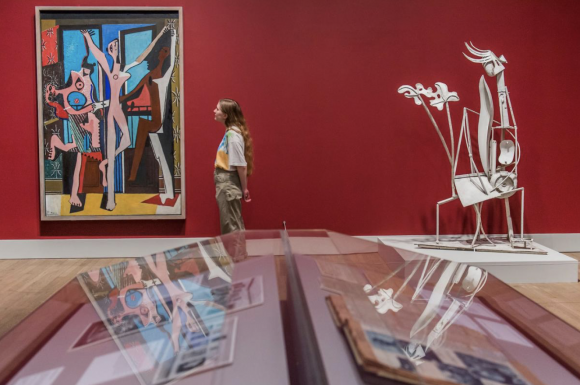 Insightfully, the show draws our attention as well to the jealous tussle that was going on at the time with Matisse, whose dreamy females seem never to attract any of the opprobrium that Picasso’s glowing picturings of the dozing Marie-Thérèse usually do. Two grand old toreadors are fighting over the art crown. Picasso is sending his brightly coloured Marie-Thérèses into battle against Matisse’s elegantly reclining odalisques.

All this is beautifully told in paintings that dart like dragonflies from this bit to that. “You start a painting, and it becomes something altogether different,” explains a helpful quote on the wall. “It’s strange how little the artist’s will matters.” He seems often to be stroking her as well. And it is this sense of touching that leads him, in the exhibition’s most stirring moment, to a switch, as spring arrives, from painting to sculpture.

When this show started out in Paris, in its first incarnation at the Musée Picasso, it played down the role of sculpture in Picasso’s progress through 1932. Here, the opposite happens. And there’s a sudden change in mood as the luxurious atmospheres of the paintings are replaced by something totemic and primal. A series of excellent loans reveals how the roundnesses he had been painting so happily metamorphose, in the sculptures, into a curious investigation of Marie-Thérèse’s head, with its impressive Greek profile and a high forehead that turns recurrently into a giant penis.

The main reason 1932 was such a prolific year for him is because it was the year of his first retrospective at the Galerie Georges Petit in Paris. That show opened in June and, like all artists, before and since, he was working extra hard to meet a deadline. The Petit retrospective was hung busily with examples of all his earlier phases, interspersed with the spectacular new portrayals of Marie-Thérèse. The Tate has devoted a characterful gallery to it, filled with a selection of early Picassos. A beautiful portrait of Olga in a mantilla. Drawings of his children. An illusion of family peace.

The retrospective marks a distinct change in the show. Before it, he is furiously productive and in the zone. After it, there’s a postcoital slump in his output. The work gets smaller, less finished, less determined. And for the rest of 1932, his art seems to lurch from experiment to experiment. There’s a lovely room of charcoal drawings. A fascinating sequence of responses to Grünewald’s terrifying Crucifixion in Colmar. And a set of anxious beach scenes in which the horseplay on the sand feels edgy and frantic.

With an exhibition to finish coherently, and nothing jolly to do it with, the organisers arrive at an unexpectedly dark finale. Late in 1932, while swimming in the River Marne, Marie-Thérèse caught a serious infection. Picasso’s response was to produce a series of spooky images in which he imagines her drowning and being saved. Thus, the great Picasso year of 1932 reaches a conclusion that feels as if it belongs in the story of voodoo, rather than the story of modern art.

What a show. What revelations.