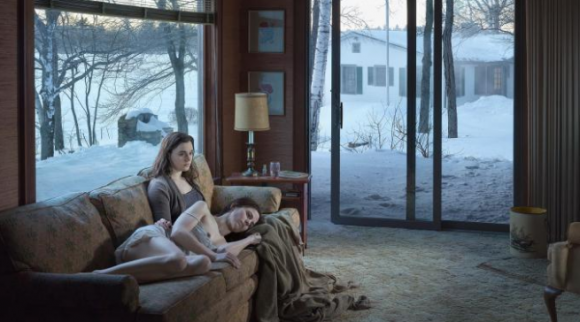 Back in the 1980s, photography went through a lucrative transformation: it stopped being “photography” and turned into “art”. Of course, no one disputes the status of great photographers such as Eugène Atget or Alfred Stieglitz or Diane Arbus. But this was different. This was a case of grabbing the entire medium by the belt hooks and yanking it up the mountain to another level, where its achievements appeared more significant, its presence more hallowed, and where — crucially — its prices were higher. The level of art.

Why did it happen? Some of the reasons were technical. Until the 1980s, photography had largely been an A4 medium, small and modest, hugging the wall and communicating with intimate black-and-white whispers. But the advent of full-colour printing and huge bits of photographic paper gave it the opportunity to grow larger and louder. You could hang a big photograph on the wall of your loft and it functioned exactly like a big painting.

It was also a medium through which you could tell stories in a legible, figurative language that didn’t test the sophistication of the freshly moneyed 1980s yuppie. The innate commercial problem with photography — the fact that you could print countless versions of the same image — was successfully solved by marketing it in strictly limited editions. Cindy Sherman or Robert Mapplethorpe or Thomas Struth no longer needed to describe themselves as “photographer” in their passports. They could Tipp-Ex that out and write “artist”. Bingo.

Yapping around the edges of this lucrative transformation was Gregory Crewdson, punk rocker (he was in the Speedies) turned photographer, whose imagery successfully exploited the storytelling that was such a big draw in the rebranding of photography. His modus operandi was to create a spooky domestic situation in a house or a garden — often involving naked women — and to photograph it in such a way that its air of mystery was intensified and its sense of foreboding heightened. In a Crewdson shot, something dark was always happening, but you were never sure what it was.

A movie’s worth of intrigue and suspense was condensed into a single still. 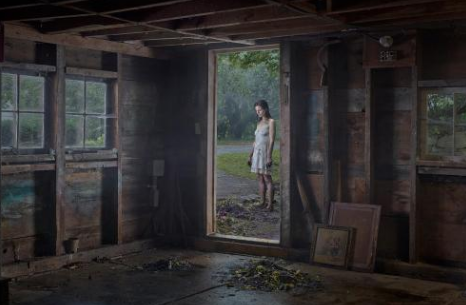 His most familiar locale was the American suburb, the dull, interstitial edges of a small town where everyone lives in neat clapboard houses, the husbands drive to work in station wagons and the wives have lots of hours to kill, staring into a mirror. It’s a part of the world of which I have no experience, but which I feel I know intimately because it has featured in so many disquieting movies. When people in films kidnap children and store them in the cellar, these are the kinds of houses in which it happens. When monsters from the forest attack unsuspecting moms as they hang out the washing, these are the gardens where they pounce.

Outing the neatness of the suburbs as illusory is a trope of American cinema. It is also what Crewdson tries to do in large, moody photographs that seek to fill the wall with a sense of unease. Originally from New York, he works in “collections”: groups of interrelated pictures set in specific American locales. For his new collection, Cathedral of the Pines, he deposits us in Becket, Massachusetts, a forested hiking destination that feels like somewhere the inhabitants of the clapboard suburbs might go on vacation. There’s a lake that freezes in winter. Tall forest trails for walking, thinking, remembering. And a thin smattering of secluded houses and badly parked trailers, inside which the usual Crewdson shenanigans are taking place.

In the picture called The Basement, an old guy is watching videos with a teenage girl. The windows to their room are barred. She’s sprawled on a grubby settee. He stares glumly at the telly. You wonder why the two of them are holed up in this doomy wooden prison, and then you realise. Crewdson supplies the clues. You imagine the worst.

A few pictures further, a naked chap sits in the doorway of a battered VW van while a naked woman stands in the middle of the road and looks down. Have they escaped from somewhere? Are they the attackers? Crewdson throws you a bone, and you, the shaggy dog, gnaw dutifully on its possibilities.

It’s a process I used to enjoy, but which, with this latest collection, feels as if it has had its time. In previous Crewdson shows, it was possible to imagine that the existential gloom that is the default tone in his angsty tableaux was a genuine insight into the mood of the suburbs, and that he was exploring unsettling human truths. Here, however, it’s soon obvious that it’s all schlock. That the storylines he insinuates are the kind you find in the National Enquirer, not in John Cheever. This is a disquiet that has been learnt at the movies or read about in sensational tabloids, and the portentous artifice of it all thrusts the imagery into the realms of silliness. 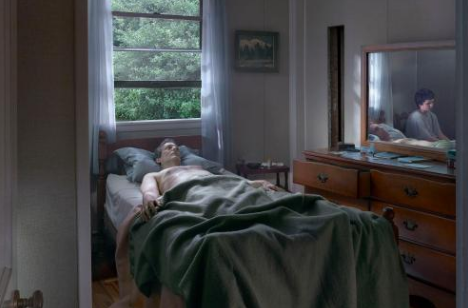 That’s one problem. Another is the fetishising of Crewdson’s cinematic skills. Famously, he lavishes the kind of resources on his photographs that are more usually lavished on a Tarkovsky film. A documentary slide show at the exhibition details his methods. The outdoor lighting is achieved with huge equipment rigs, lifted high into the trees. The forlorn women sitting by the windows or staring into mirrors are targeted as precisely by a suggestive half-light as the women in a painting by Vermeer. Every lonely nude standing on bare floorboards and oozing existential despair is actually surrounded by a battalion of technicians — pointing, flagging, lighting, screening, directing. Every casual detail in every bare room has been carefully chosen and placed.

Unfortunately, this enormous technological effort seems more waste than wonder and adds nothing salvatory to the finished image. What you remember is the melodrama of the poses, the falseness of the situations, the repetition of the Fargo moods, and the sheer number of unfortunate women asked to stand in the buff and look meaningful as their seriousness turns to absurdity.

For something more rousing, I recommend Laughter in the Dark, a selection of political outbursts by Philip Guston in which the ridiculous figure of Richard Nixon is given a fearful artistic bashing.

Poor Tricky Dickie. It’s not his fault that his jowly cheeks and ski-slope nose were such a perfect physiognomic stand-in for droopy testicles and a penis. But, having noticed the resemblance, Guston, the great abstract expressionist turned slobbish realist, spends nine exhibition walls laying into his target in a brilliant and relentless display of pictorial abuse. What a shame he isn’t around today to have a go at Trump.