Thumbs up for Marc Quinn’s marvellous sculptures: they depict a modern crush in a madly ancient world 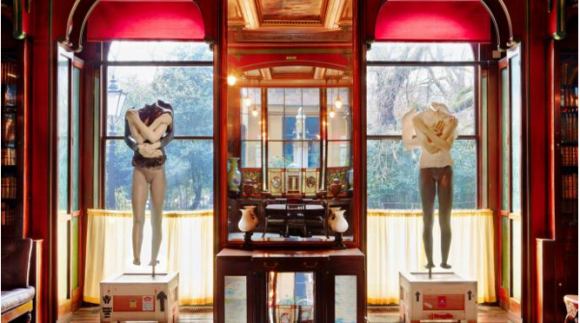 Marc Quinn has had a curious career. His arrival was spectacular. Self, a cast of his own head made from 10 pints of his frozen blood, became quickly notorious in 1991 and is one of the defining works of Brit Art. A decade and a bit later came Alison Lapper Pregnant, that discomfiting portrayal of a dysmelic marble giant who rhymed her physical shortenings with the Venus de Milo in Trafalgar Square: it remains the most potent of all the Fourth Plinth artworks. Then there was the life-size Kate Moss, cast in gold, attempting tricky yoga poses at the British Museum.

These were genuinely impactful contributions. They featured an understanding of cutting-edge science that was unique in British sculpture, combined with themes as ancient as we are. In Quinn’s big artistic moments, the past and the present crashed head-on in a union that was exciting and edgy.

Why is this a curious trajectory? Because between the big artistic moments, he appeared to slip out of view. Yes, he was making things. Lots of them. But they tended to be timid and fuzzy. The perfect connection between art and the moment that he had thrice achieved has proved difficult to repeat. So, whenever a new body of his work arrives on the artistic front line, or, in this case, at the wondrous Sir John Soane’s Museum, in Lincoln’s Inn Fields, we hungry art visitors turn up full of hope and ask ourselves: is it a thumbs-up? Or a thumbs-down?

The answer is on its way. First, the circumstances. Drawn from Life, as Quinn’s new show is entitled, features 12 life-size sculptures of a fragmentary human couple wrapped in an embrace. Both are naked. She stands at the front, and is all there, except for her head. He is at the back, and consists solely of a large and wrinkly pair of disembodied hands that encircle her, grab her, enfold her, protect her, press her, feel her, caress her. What these wrinkly hands are up to is the chief difference between the 12 sculptures.

From the exhibition paperwork, we learn that the bodies in question have been modelled by Quinn himself, as the grabbing hands, and his partner, Jenny, who is a dancer. She is lithe and wispy, and has a slight dancer’s body. He is big-knuckled and solid, with thick Michelangelo hands. Their entwined figures are casts of their naked selves, and because of their contrasting presences, my first inclination was to think of them as Beauty and the Beast. However, the series is actually called — and this is soppy — All About Love. And each of the 12 sculptures receives a subtitle drawn from the text of Shakespeare’s Valentine’s card of a sonnet, “Shall I compare thee to a summer’s day?”. Thus we get Heaven, Eyes, Shines, Lovely. Did I say soppy? Make that swimming in an ocean of intoxicated love. 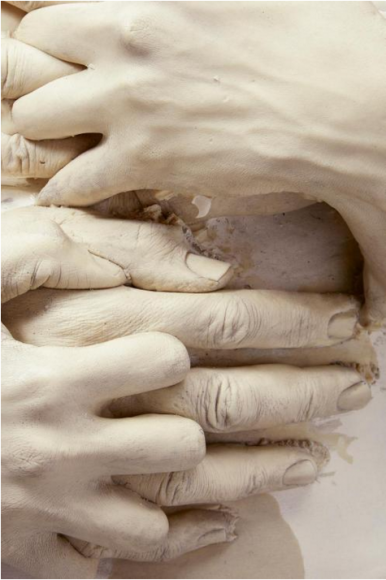 If you know Sir John Soane’s Museum, you will know that it is a Georgian labyrinth packed to the cupola with a mad assortment of exhibits. Sculptures. Paintings. Tiles. Windows. Panels. When you go to the Soane, you breathe in, in case you knock something over. Yet somehow space has been found to scatter the dozen life-size newcomers among the niches, alcoves and window recesses. Finding them is a treasure hunt. Look. There’s one at the end of that narrow corridor. Look. There’s another reflected in that parallax mirror.

And because Sir John Soane’s Museum is already packed with plaster casts of famous examples of classical art — Venuses, Apollos, Jupiters — many of which are also fragments, Quinn’s entwined bodies, the headless her, the trunkless him, make a comparison with their classical neighbours immediately unavoidable. Here, then, is a contemporary sculptor exhibiting a fascination with the art of the ancients that is startlingly personal and intense. Who would have thought it?

Fragments of classical sculptures have the unintended effect of concentrating our attention on the bits that remain. Because the Venus de Milo has no arms, the perfect beauty of her torso seems to be being foregrounded. We can’t miss it. Because the Belvedere Torso has no legs or arms or head, we are left with a stupendous six-pack to admire. In this case, it is the entwined arms and hands of the clinching lovers that draw attention to themselves and set the storyline. And how eloquently they do it as they dance their digital pas de deux.

In Untrimmed, her delicate hands cover his bumbling ones in a poignant gesture of protection. In Gold, the big masculine paws press so firmly against her breasts that they push the flesh to depths that feel painful. In Eyes, the man’s hands pull apart the woman’s hands, exposing her nudity in a moment of delicate revelation.

Best of all, in Heaven, encountered in a room of its own, which feels like the culmination of the journey, the man’s hands hold the woman gently by the waist while she stands before us, fully exposed, pointing a finger to the sky in a pose that feels archaically symbolic, as if she were a Hindu goddess indicating the direction of enlightenment to a besotted Krishna.

As these are casts of actual bodies, rather than ancient carvings from Khajuraho or Athens, the details have a prickly reality to them that you never find in classical sculpture. The large, veiny hands of the artist clutching his muse’s delicate wrist in Hot add a note of testy actuality to their ambiguous embrace. Is he cuddling her or forcing her? It’s art, but it feels like life. The moods of Silent Witness are being visited on the legacy of Phidias.

We have here, therefore, a contemporary sculptor who is deliberately and knowledgeably referencing sculpture’s jam-packed figural past. The fragments he presents refer to the broken tradition of the Venus de Milo and to Rodin, with his carefully created close-ups of hands and legs. At first sight, the foregrounded Jenny reminds us of Degas’s celebrated Little Dancer, the teenage ballerina who steps daintily into our vision with her arms folded behind her back. And when you look closely at the utterly tangible pressings of hands and fingers, you are encouraged to remember those masterpieces by Bernini in which the marble has been carved in prefect approximations of veiny flesh.

What is most marvellous about all this — so, yes, it’s a big thumbs-up for Quinn’s new show — is the emotional honesty of these strange and unlikely sculptures. They refer pointedly to the tradition of figurative sculpture, but they do so in a manner that feels intensely personal and trustworthy. No irony. No hiding of feelings. No resort to intellectual cross-purposing. Just a sculptor with a crush finding innovative ways to express that crush in a modern art that is excellently besotted by the art of the ancients. More, please.