John Berger’s art series, so hailed in his obituaries, was neither great nor influential television 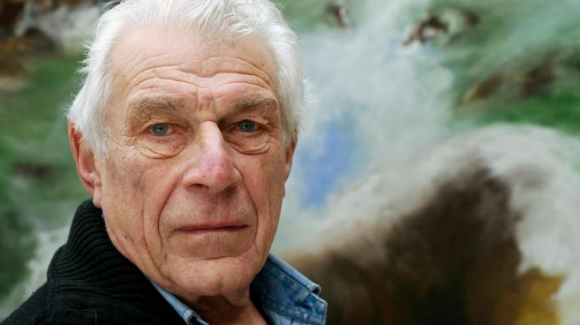 You would have thought that 2017 might have waited a day or two before revealing itself to be the brother in arms of 2016 when it comes to death. But no. The passing of John Berger, just a few moments into the so-called new year, continues a pattern of cultural removal so relentless that it feels as if someone up there with a Red List is casually ticking off names.

At least Berger made it to 90, a rare age in the arts. And, given how many things he was — an art critic, a TV presenter, a Booker-winning novelist, a playwright, a poet, a farmer — he had time enough in the various sectors of his life to have achieved something meaningful in all of them. That said, he will always be best known for Ways of Seeing, his short and punchy TV series about the way we look at art. That’s what we remember.

In all the obituaries and farewells that have appeared this week, Ways of Seeing has been given pride of place. The four half-hour TV films, made for the BBC in 1972, have acquired a mythic past. “One of the most influential television programmes of all time” is a line that’s been bandied about. Even that other unwarranted victim of the recent carnage, AA Gill, was an admirer. Adrian would regularly cite Berger’s pint-sized four-parter as a piece of arts television that did things the right way, and seemed especially keen to mention it while trashing my own poor efforts in the field. Thanks, Adrian.

But if Ways of Seeing was as influential as people say it was, how and where has that influence manifested itself? Where in arts television can we actually spot its impact? Quite honestly, I cannot think of a single television programme about the arts made in the intervening years that owes anything tangible to Berger. Paradoxically, the other great series of the early years of arts television, Civilisation, which Berger decried so loudly — Ways of Seeing was intended as a deliberate alternative to Civilisation — has proved far more significant.

Thirteen parts long, filmed exquisitely in 35mm by a BBC production team that travelled 80,000 miles across 13 countries, and directed by Michael Gill, Adrian’s father, Civilisation is the daddy of all those art-porn films still being made today — usually presented by Simon Schama — that fall under the rubric “landmark arts series”. Lingering shots. Luscious music. Lightly learned. Mightily luggaged.

So influential has the Civilis­ation model been, it has broken out of the art category and conquered all the other landmark fields — nature, travel, history, cooking. Indeed — paradox of paradoxes — the BBC is itself currently remaking Civilisation in an expensive international co-production presented by the aforementioned Schama and others. Far from consigning the Civilisation approach to the dustbin, Ways of Seeing turned out to be the ultimate one-off. It came. It did its weird thing. It went.

Watching it again the other day, I could see why. What a cranky piece of television it was. Dressed in a tight white shirt decorated with Aztec designs, which he does not change for all four films, Berger, sporting a louche Mick Jagger haircut, stands in front of a blank background and lectures us melo­dramatically on the way we look at art. There is about him something determinedly Byronic, as if he were a 19th-century actor-manager who has insisted on starring in his own Hamlet.

Unfortunately, pretty much every sentence he utters is undermined by a quirky delivery that adds a note of Restoration comedy to even his most serious pronouncement. Being lectured on art by someone for whom the Renaissance was a Wenaissance and the rococo is wococo never feels entirely wight. I adore Rubens, but giggle at Woobens. I share Berger’s admir­ation for Rembrandt, but with Wembwant, I have to pinch myself to stay focused.

That could not be helped. The same cannot be said of the programme’s most telling shortfall — its bleak presentation of the art it discusses. Ken Morse, the famous rostrum cameraman, can rarely have been as busy as he was on Ways of Seeing, trundling up and down dodgy transparencies, zooming crudely into what look like cuttings from a Sunday supplement. Has any programme on art, ever, been as uninterested in its examples as this? I know the budget was tiny, and one of the key points of the series was to make clear the effect on art of the age of reproduction, but the rough manner in which great paintings are slapped before us feels like an act of aggression.

In my experience, the tele­vision camera can educate you mightily in the mysteries and intentions of the artist. It can show you things that you simply cannot see with the naked eye. Woobens, for instance, liked to paint huge pictures whose far-away corners are filled with exciting and daring bits of paintwork that remain invisible in normal circumstances. They are his private bits of pleasure. With a hi-def camera and a ladder, these delightful pictorial moments can be shared.

No such intimate pictorial insight is allowed to sweeten the medicine in Ways of Seeing. Declaring himself to be against close-ups because they break up the overall meaning of a picture, Berger contents himself with blurry full-lengths that flash past us at motorway pace. For an art series, a series about looking at art, Ways of Seeing is spectacularly art-free.

The second film, the one about the treatment of the nude in art, spends its entire second half at a tea party in Notting Hill, where the tight-shirted Berger, playing coyly with an erect cigarette, discusses his own film with a harem of female devotees. I don’t know what’s worse. The oriental tilt to the power relationships recorded here. Or that, during the entire 15-minute discussion, only one picture is shown — an especially murky reproduction of a Lorenzetti in Siena.

So no. Ways of Seeing wasn’t anything like as influential or important as people have been saying it was. Not as a television programme, at least. The reason it is cited so habitually as a game-changer is because of the small book that accompanied the series. Without the Restoration lisp and the clunky camera­work, Berger’s determinedly Spartist view of art as a pointless possession, locked in a societal power struggle, an expensive gewgaw, an oppressive male preserve, found it easier to grow wings and fly.

To this day, Ways of Seeing, the book, remains a must-have tome on the art theoretician’s shelf and a set text for those starting out in the field of cultural studies. Indeed, in a world in which reading has replaced looking as a way of understanding art, Ways of Seeing clearly deserves its rank as a key text.