The National Gallery’s latest show explores the influence of Caravaggio on his contemporaries, but none of them came close to his genius 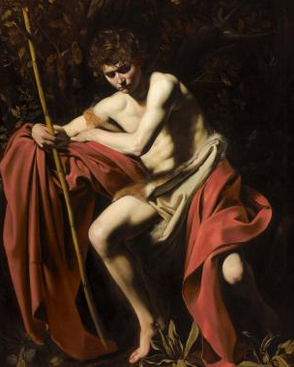 We denizens of the 21st century are familiar with the texture and spread of art fads. They might even be described as the principal way in which change arrives in art today. Something gets fashionable. It pops up in a biennale. Six months later, it is featured at the Serpentine Gallery. Six months after that, it is yesterday’s look.

Described thus, the impact of such fads sounds shallow. In our world, they invariably are. But the first conclusion to be drawn from Beyond Caravaggio, at the National Gallery, an investigation of the impact of Caravaggio (1571-1610) on early-17th-century painting, is that art fads are anything but a modern creation (or affliction). The arrival of Caravaggio, his immediate influence, the dramatic uptake of his manner, are events that feel unexpectedly familiar in their tempo and reach. One minute he was unheard of; the next minute he was the prevailing way. We expect the past to have been more stable in its attitudes than our own blighted days, but it wasn’t.

There, though, the similarities stop. Our fads are invariably trite and worthless. The Caravaggio fad was not. Actually, it triggered one of the most profound revolutions art has ever seen. He was as influential as the impressionists, as radical as the cubists. And, although the National Gallery show doesn’t shout it out — it is too intelligent, scholarly and balanced an event to describe these developments as shrilly as I am doing — Caravaggio changed the course of art. We can talk honestly of art being one thing before him and another after him.

The exhibition that tackles this crucial moment has gathered a handful of Caravaggio originals — not enough of them, but then there never are — sprinkled thinly across seven galleries of work by artists who were changed by him and who learnt from his lessons. The emphasis is on painters who were chronologically close to the master and who actively “copied” his style. This, then, is not a show about his wider, less obvious influence. Had it been that, it would have had to include Rubens, Rembrandt, Velazquez, all of whom were changed on a nuclear level by the passage of Caravaggio. Had it reached as far as the present, it would have needed Cindy Sherman in there, and all the other fierce identity-swappers, because it was Caravaggio who pioneered the complex presence of the artist in their own art.

What, then, are the momentous changes that Beyond Caravaggio wishes us to notice? The one pointed out most loudly and recurrently here is Caravaggio’s approach to storytelling. His pictures pulled us into their narratives with a directness that was new. Had he been a novelist, we might be describing his works as “page-turners”.

To prove it, the opening gallery has a ring of pictures by his “imitators”, showing cardplayers and fortune-tellers cheating their unsuspecting victims. To understand how the scams are being perpetrated, you need to lean in and follow the details closely: see the hand hiding the ace, notice the removal of the pouch of money, trace the swapping of the gazes.

Manfredi’s marvellous Fortune Teller, from c 1615, actually shows a three-way scam, as the two gypsies fleecing the innocent boy are themselves being robbed by the boy’s accomplice. Is there no one in baroque Rome a man can trust? De La Tour’s beautiful Cheat with the Ace of Clubs, meanwhile, from the Kimbell Art Museum, in Texas, makes something dreamy and balletic out of the frozen robbery.

What’s missing, apart from the stack of coins that Manfredi’s innocent had in his pocket, is the Caravaggios that triggered all this: the early paintings from the 1590s that started the cheating fad. Neither The Fortune Teller, from the Louvre, nor The Cardsharps, from Texas, is here, so we can witness the results of his promptings, but not the actual prompts. Instead, the National’s own Boy Bitten by a Lizard, painted in about 1595, a few years after he arrived in Rome from Milan, has to bear the weight of representing early Caravaggio and his cheeky assault on the Queensberry rules of art.

Where the mature Caravaggio was a master of dark and intense religious moods, the early Caravaggio was something lighter and more sarcastic: a painter who mocked his world for its decadence and gullibility. Hence the cardsharps and fortune-tellers. Boy Bitten by a Lizard, a self-portrait in which he is dressed as an effeminate Bacchus who has reached down to pluck a cherry — yes, that cherry — only to have his middle finger — yes, that finger — bitten by a lizard, is a sarky Italian lament on the brevity of sensual pleasures. The lizard, representing Satan’s curse, old age, as it always does in art, is punishing the wine-loving Bacchus for his pursuit of pleasure.

Caravaggio’s humour, a quality that is often overlooked, spoke quickly to his contemporaries. So did his game-changing realism. In Boy Bitten by a Lizard, the marvellously tangible cherries, the dramatic self-involvement, the Hitchcockian shadows, had the effect of yanking his art out of the middle distance, where most previous art was set, and pressing it under our noses.

The show ahead is dominated by his religious influence, where the mood changes from sarky to sombre, but the methods remain the same. The Taking of Christ, from c 1602, borrowed from the National Gallery of Ireland, is a Caravaggio night scene of stupendous intensity. The lighting, the realism, the sense of overcrowding seek to make a distant religious event feel as if it is happening before you. A good word for the effect would be “cinematic”. Not just any cinematic moment, but that especially tangible one when Stanislavski and his method pushed out the Gables and the Coopers and pushed in the Brandos and the Deans.

Apologies for focusing on Caravaggio himself when the show is chiefly about his followers. The inevitable truth is that on most occasions he shows them up. But the displayed works, drawn mainly from provincial collections in the UK, with a few ambitious foreign loans, do an excellent job of proving how quickly and widely his revolution spread.

Caravaggio’s career-making moment as a religious artist was the unveiling of his dark telling of the story of St Matthew in the Contarelli Chapel, in Rome, in 1600. The effect was immediate. So immediate that, by 1601, Giovanni Baglione, later to become a bitter enemy, was already painting in a dark and unmistakeably Caravaggesque manner in the slumped Ecstasy of St Francis seen here. Even the sexy boy angels tending Francis, with their homoerotic tingle, are a clear steal.

High marks to the National Gallery for finding so many Caravaggesque examples scattered about Britain’s lesser-known collections. Their presence adds weight to the show’s argument, and a few of them are real finds. From the Ferens Art Gallery, in Hull, comes a beautiful St Sebastian, slumped on a scarlet cloth with St Irene tenderly pulling out his arrows, painted by Nicolas Regnier, an artist we need to hear more about.

Whoever painted the exquisite Christ in the Carpenter’s Shop, from the Royal Collection, does not deserve to be known only as the Candlelight Master. This is a painter of rare sensitivity. As for the weird picture by Spadarino, from Perth Art Gallery, of Christ sticking his finger into his own wounds and urging us to have a good look, it is testimony both to the impact of Caravaggio’s dramatic storytelling techniques and to the tasteless depths to which his followers could sink while striving to imitate him.