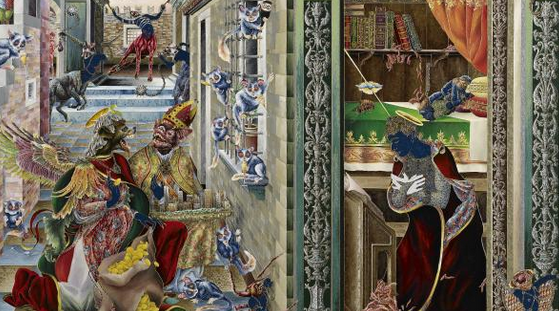 The myth of the Renaissance is astonishingly persistent. No matter how much evidence emerges proving it to have been an epoch of chaos and debauchery, the view continues to be held that it was an era in which order and civilisation were reborn. How desperately we cling to the hope that, in this celebrated stretch of our godforsaken human past, the lessons of the ancient Greeks prompted us to attain, however briefly, a true cultural nobility. Ha!

I laugh because I have just seen an extraordinary exhibition of new paintings by Raqib Shaw, in which the Renaissance and its myths come in for a fearful pictorial trashing. Imagine someone opening up the gates of hell and instructing all the newly freed monsters and abominations to head for the National Gallery, where they should search out the art of the Renaissance and set about infesting it. That, pretty much, is what happens in Shaw’s show at White Cube. This isn’t an exhibition so much as an overrunning.

His background is intriguing and different. He was born in Calcutta in 1974, and grew up in Kashmir, where his family busied itself in the luxury-goods market, buying and selling jewellery, fabrics, carpets and antiques. Thus, from the beginning, he was exposed to a waterfall of influences that were sumptuous and unusual. It shows. 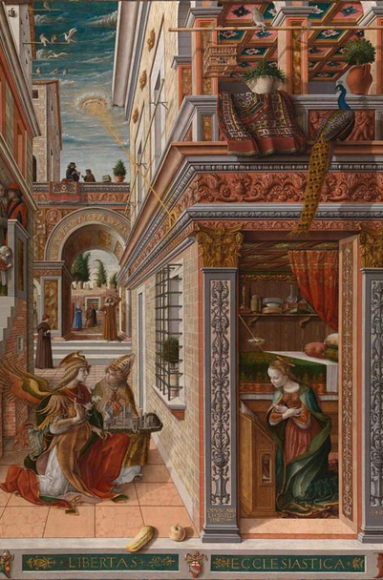 In 1993, Shaw came to England on family business and encountered the National Gallery for the first time. It was, apparently, a life-changing experience. Deciding there and then to become an artist, he returned in 1998 and enrolled at Central Saint Martins, where his work immediately stood out. There are differences and there are differences. His differences are off the scale.

Where to start? Let’s go for his technique. It’s remarkable. From a distance, his busy, detailed, glossy paintings look as if they might be the handiwork of a contemporary follower of Hieronymus Bosch. Only when you get up really close do you realise that the jewel-like effects and frantic detailing have been achieved in an exceptional fashion. In fact, these are not really paintings at all. Better to think of them as bits of enamelwork.

Starting with a wooden panel (birch), Shaw draws on his designs in intricate gold cells, which he then fills in with pools of liquid colour, manipulated, it says here, with a porcupine quill!

When the colours dry, they form intricate encrustations that twinkle with light.

It’s a decorative skill learnt, surely, from somewhere else. My guess would be from Japanese nihonga art. But where the sumptuous and time-consuming Japanese enamelling technique may previously have been used to create ornate vases decorated with lotus flowers, or small boxes inlaid with peonies, Shaw employs it to imagine scenes of appalling Renaissance debauchery. Instead of recording the essence of beauty, his nihonga skills have taken to exploring the limits of brutality, rage, death, decay, sinfulness, madness and violence. 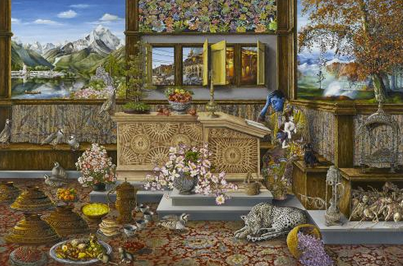 Called Self Portraits, the show celebrates the artist’s return to the site of his original conversion, the National Gallery, from whose collection he has selected a curious mix of paintings to reimagine and recreate in his trademark apocalyptic manner. It’s a curious selection because it features none of the obvious Renaissance masters we might have expected in such a tribute: no Leonardo, Michelangelo or Raphael. Instead, he chooses artists who usually populate the era’s background, such as Marcello Venusti, the dutiful mannerist hack who coloured in Michelangelo’s drawings for him, or Ludovico Mazzolino, who worked in Ferrara, where he painted pint-sized religious miniatures that are tough to spot. These are the hod carriers of the Renaissance, not the master builders.

On entering the gallery, you find yourself surrounded by scenes of infestation that are frantic yet gorgeous. Peacocks, scorpions, bush babies, parrots and hyenas jump, swing, crawl, climb, fly and roar from arch to arch, church to church, palace to palace, picture to picture. It’s either like walking into a Harrods overrun by the occupants of London Zoo, or a zoo in which the luxury goods have run wild. In Shaw’s world, boundaries are things monkeys use as climbing frames.

With so much going on, it takes a while before you successfully recognise the National Gallery models that prompted these drastic mutations. I’m a fervent admirer of Carlo Crivelli, the transported Venetian master who worked along the Adriatic coast, producing art of exceptional intricacy and invention. Crivelli set his religious art in carefully described Renaissance buildings, which he recorded in extravagant detail.

So the reworking of his beautiful Annunciation, painted in 1486, is easiest to spot, despite the fact that it has been recast as a deadly urban squabble between angry gangs of mutated bat-monkeys.

Keeping most of Crivelli’s gorgeous architecture intact, Shaw has turned the gentle moment of the Annunciation into a scene of roaring horror. In the original, the Virgin Mary is at prayer in her beautiful house while the angel Gabriel informs her she is about to become the mother of Jesus. In Shaw’s abominable reworking, the angel Gabriel is a snarling hyena, the beautiful house is overrun by monkeys, lizards, snakes and peacocks, and the Virgin Mary is, I think, Shaw himself, turned bright Kashmir blue and seemingly praying for a break in the chaos.

What’s it all about? In interviews, Shaw describes himself as a “satirist” and encourages us to understand his transformations of Renaissance art as dismayed commentaries on our ghastly present. In previous shows, he has made clear his admiration for Bosch, whose savage view of humanity he appears to share. Thus, his reworking of Venusti’s Purification of the Temple takes the moment when Christ chases out the moneylenders with a whip and turns it into an orgy of greed and concupiscence. Obscene amounts of gold pour onto the temple floor from the monsters above. If this really is a representation of the contemporary art world, as claimed, then, yes, it’s spot-on.

As the exhibition is called Self Portrait, identifying Shaw in all this pictorial chaos is a necessary task. In Last Rites of the Artist’s Ego at Shankryacharya Temple (After Ludovico Mazzolino), he is clearly the blue-faced corpse in a coffin, surrounded by hungry crows. In Self Portrait in the Studio in Peckham (After Steenwyck the Younger), he is presumably the skeletal Narcissus at the centre of the picture, turning with horror from his own reflection.

So it’s self-piteous stuff. And ultimately the melding of startling creative techniques with dime-novel identity issues is a thinner achievement than I initially hoped. There’s no variation of pace or tone. Having settled on his extravagant manner, Shaw keeps repeating it with extra extravagance. Here is an artist, I suggest, who should only exhibit his work one picture at a time.