It’s hats off to Biggs & Collings’s gorgeous mosaic fusion of pattern, colour and pictorial ambition at the Vigo Gallery 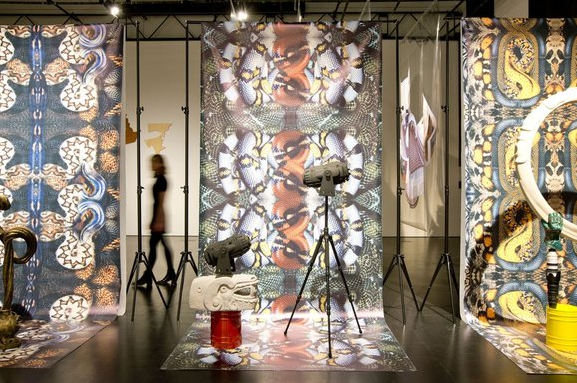 Something that happens to you a lot if you are an art critic is that people ask you if you can draw. “Have you ever wanted to be an artist?” they gently goad. It’s a predictable question, underpinned by the assumption that art critics are failed artists who have turned to the next best thing. In my case, it was almost true. I did fancy myself once as a talented draughtsman, and indeed my first “job” in the media was working as a cartoonist for a listings magazine that had started in Manchester. After a few weeks, the editor turned to me and sighed: “These are really shit. Is there anything else you can do?” As I was studying art history at the time, I offered to write some exhibition reviews. The rest you know.

That is not the case, I believe, with my colleague Matthew Collings, whom you may know from the London Evening Standard, where he has been shipped in recently as the replacement for the late Brian Sewell. Collings has quite a record as an art critic. He has written some cracking cultural summaries, notably Blimey!, the story of Brit Art. And, of course, he’s been on the telly a lot, bumbling about charmingly, sharing his quirky understanding of the progress of art. This Is Modern Art, his best series, won him a Bafta in 1998.

All this is impressive. However, what I have always liked most about Collings is the fact that he has simultaneously remained a practising artist whose views are shaped from the inside. Back in the day, when we both started scrambling up the slippery pole, Matt used to be a British version of a German expressionist and made noisy paintings full of big gestures and pumped-up pictorial drama. I never had the heart to tell him his faux-Teutonic pictures were awful. But they were.

So it is with genuine pleasure that I can now confirm that his latest work is anything but awful. The new selection of paintings by Biggs & Collings that has gone on show at the Vigo Gallery in central London is beautiful, subtle, original and informed. The old Matt is nowhere to be seen. The new Matt has arrived at something marvellous.

Biggs of Biggs & Collings is Emma Biggs, a mosaicist, to whom Collings is now married. The art of making mosaics has a history that reaches back to the Romans and beyond. But the contemporary world has rarely embraced it. Picasso designed a couple of stunning mosaics in Grasse, and that’s just about it. It’s a forgotten art form.

But Biggs’s history involves teaching it in various hopeful institutions, as well as producing work for locations as historic as Westminster Cathedral. I hope she succeeds in prompting a revival. What makes the art she produces with her husband so riveting is the unique combination of dynamics inherited from mosaic-making — pattern, colour, repetition — with pictorial ambitions that appear to reach back to the invention of abstract art: to Malevich, the futurists, Mondrian. Both Biggs and Collings bring something different to the crucible. When you mix them, they fuse gorgeously.

At the Vigo, they are showing a dozen new paintings, all of which appear to be based on a strict grid. Working on square canvases, subdivided into rows, then subdivided again into squares, then into triangles, the two-in-one artists create pictures that ought to feel mathematical, rigid, cold. But they don’t. Instead, they are full of light, buoyant and bottomlessly interesting.

A good way to think of them is perhaps to see something musical in them. The grids are the staves and the colours are the notes dancing between them. From these simple patterns, different tunes are allowed to emerge. The Water Above is a chamber piece in blues and greys that seems somehow to evoke ponds and streams. There’s something Debussy-like about it. Egyptians is a bright and bold grid imposed on another bright and bold grid, as if a squad of marching Egyptians had changed direction. Think, perhaps, of Verdi’s Aida.

Freed from the pressures of composition, the patches of colour dance this way and that, backwards and forwards, left and right, with a spring in their step that never stops. Instead of imposing a rigid order on them, the grid seems to free them.

Apparently, Biggs chooses and mixes the colours, while Collings applies them. In between, they argue over what should go where. With her experience of mosaic-making, Biggs champions subtle rhythms and a delicate sense of colour. Collings, with his scratchy persistence, makes things tougher and less uniform. With his art-critical hat on, he also knows where all this fits into the story of art.

There is certainly something Islamic about the joyful repetitions. And Byzantine mosaics are a ghostly influence. Most of all, the beautiful grids look like something the Italian futurists might have created in the pioneering days of modernism, the days of hope. Except that what appears to be celebrated here isn’t electricity or the speed of the city, but the way light dances across a pond in the spring; the dappling of a sunbeam; the flitting of birds in the trees. As someone has already said before me, it’s landscape art without the landscapes.

Emotional Supply Chains, a mixed show devoted to “identity in the digital age” achieves nothing tangible. Seventeen international artists, ranging from the celebrated Pierre Huyghe to the fresh-out-of-college Eloise Hawser, find themselves involved in one of those speculative gallery get-togethers that only make sense in the mind of the curator: in this case, a chap called Paul Luckraft, who tells us that the exhibition “explores how a sense of self is fabricated via a supply chain of objects, ideas and experiences”.

Hmm. A few of the exhibitors are certainly fascinated by the flexibility of the self — Frances Stark, Ed Fornieles, Ann Hirsch — but most of them are not. Simon Denny, the New Zealander who seems to be everywhere at the moment, devotes his latest techno-mess to Kim Dotcom, a hilarious internet millionaire who made a fortune in New Zealand in a file-sharing scam. Gathering up tons of information about Kim in the form of cuttings, photos, diagrams and surviving possessions, Denny creates a glum installation in which fragmentary facts have been brought together like photos on a stalker’s wall.

As with all geek art, it’s heavy on evidence but light on worthwhile conclusions. My advice to Denny is: get out of the shed and do some walking. Your art has developed the sick glow of an all-night computer.