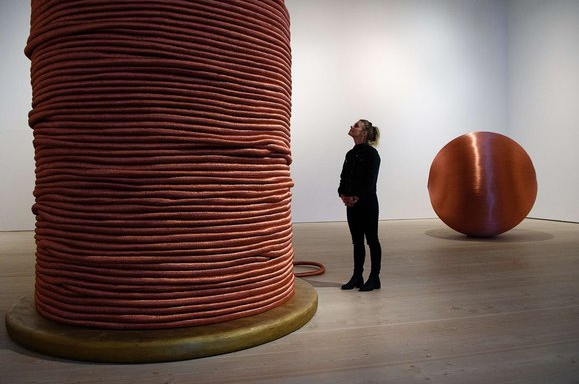 And the award for the first meaningful exhibition of 2016 goes to… Champagne Life at the Saatchi Gallery!

Of course, there will be those who remember Charles Saatchi’s manipulative past in advertising, as well as the awful press he received over the Nigella-in-a-restaurant incident, and who will see this unexpected foray into women’s art as an obvious effort at image-shifting. The thought crossed my mind as well. But it matters little if such suspicions are correct, because Champagne Life, whatever its origins, is a notably vigorous selection of art. The fact that all the exhibitors are women may constitute an issue on paper, but in the flesh it feels largely incidental. What counts is the discovery of an unfamiliar artistic cast, most of whom produce powerful work.

The show gets its title from a picture by Julia Wachtel featuring Kim Kardashian and Kanye West in one of its sections, and Minnie Mouse in another. Kim and Kanye are upside down. Minnie is not. As with all of Wachtel’s art, the cartoon character appears to be addressing the audience — us — while pointing meaningfully to the illustrative Kimye. Imagine a lecture theatre in which the professor is pointing to a slide that’s flashed up on the screen behind. Professor Minnie Mouse is lecturing us on the deeper meaning of the Kardashian-Wests.

This sly combination of cartoon imagery and the real world allows the artist to make sarky observations without having to be explicit. Champagne Life feels as if its real subject is celebrity unreality: the upside-down Kim and Kanye manage to feel less real than the bright blue Minnie Mouse. Wachtel’s most legible image shows a blindfolded cartoon munchkin who is trying to peep across at a row of celebrity beauties dressed in their flimsiest red-carpet frocks. The women’s faces have been blocked out, leaving only the plunging necklines and desperately clutched clutch bags. For the blindfolded munchkin, their faces are irrelevant. For the celebrity beauties, the clutch bag is all there is to cling to.

Wachtel’s art nudges you towards such meanings without ever clarifying them. It’s a fine beginning to a show that never stops being adventurous. Sigrid Holmwood paints “folk” scenarios that take us back in time to a world where pipe-smoking women peel potatoes in cottage kitchens, or step out into the yard to butcher a pig. This traditional rural behaviour is recorded in extraordinary colour schemes that manage to blend surfboard pinks with organic beiges made from mushrooms, sour milk and birch leaves. It’s hard to imagine a less likely collision of tones and epochs.

Holmwood’s ye olde imagery feels so traditional, I suspected it had been copied from 17th-century Dutch interiors and the like. But it turns out she is a haunter of heritage museums and folk displays, and that her tableaux are re-created in real life before she paints them. Something telling is being said here about the difference between then and now. And, although it foggily involves the role of women, other nostalgic comparisons are being made as well.

With every artist getting a room to themselves, or most of a room, the show makes possible some serious impact. Gender issues come in and out of focus, but never seem especially clear. For instance, Jelena Bulajic, who is from Serbia, paints giant photorealist heads of old people looming over you like mountain crags. The old people are all women, but it’s their age, recorded in wrinkles deep as canyons, that impresses first. Some of these faces are so huge and craggy, you can imagine Bear Grylls scrambling down them. Thus, Bulajic’s giant heads nudge your thoughts towards issues of survival.

Alice Anderson makes giant copper sculptures that appear to show a cotton bobbin and a ball of wool. Mrs Giant has been knitting, and she’s just popped out of the room for a cup of tea. So big are the sculptures that the ball of wool is actually made out of 181km of copper thread, while the bobbin is roughly the size of two elephants stacked on top of each other. The imagery is domestic. The scale is gargantuan.

All this is impressive. Only the roomful of Twombly-ish scrawlings by Suzanne McClelland can be ranked a disappointment. Elsewhere, Saatchi is back to doing what he does best, which is identifying fresh talent in the busy international maelstrom of contemporary art, rather than specifically supporting female artists.

Elsewhere in her dramatically twilit display, Aidan continues her examination of the sensual potential of the veil in a set of mysterious paintings and sculptures that I will remember chiefly for their distinctive colour scheme of black, white and gold. Initially, her art felt as kitsch as the taps in a Middle Eastern bathroom. Gradually, however, I found myself enjoying its utterly unfamiliar visual presence.

This building-wide celebration of female art with which the Saatchi Gallery is welcoming in the new year turns out to be part of a trend. After just a few weeks, 2016 is already a notable year for women in art. The appointment of Frances Morris as the new director of Tate Modern is an excellent choice. In the 1980s, I curated a show with her at the Arnolfini Gallery, in Bristol, called Who’s Afraid of Red, Yellow and Blue, and was struck then by her calm, thoughtful, classy presence. I was the donkey, she was the Ferrari.

Also heartening is the news that Chantal Joffe has been appointed as professor of painting at the Royal Academy Schools. Lucky students. Joffe has a show of her bouncy, breezy figurative painting opening at the Victoria Miro gallery this week. Students, listen to her and you might do great things.