Everyday people were the focus of many Dutch 17th-century masters. Hurrah for Buckingham Palace for making a damn fine show of them 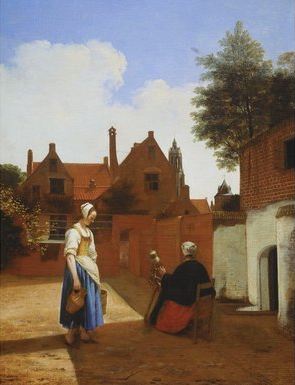 We can only speculate on what it was about scenes of everyday life painted in Holland in the 17th century that appealed so much to George IV. It’s difficult to think of a body of art less obviously “royal” than the grubby taverns and dirty kitchens recorded by Jan Steen, Adriaen van Ostade, Gabriel Metsu and co. Perhaps it was nothing more than the proverbial interest the upstairs has in the downstairs. But given what we know of George’s appetite for sex, drink and — allegedly — laudanum, it was surely a case, as well, of squalor appreciating squalor. When he looked into one of Steen’s taverns, at the fat drinkers passed out in the sawdust, at the hopeful roués plying the women with drink, at the old men groping the young girls, the fourth George saw a life he recognised.

As I said: pure speculation. But whatever possessed him to spend a mountain of the nation’s money on Dutch genre scenes should certainly be applauded, because it has resulted in the Royal Collection being stuffed with fine examples of them. A selection has gone on show at the Queen’s Gallery, consisting mostly of his purchases, supplemented with scattered acquisitions made by other monarchs. The other monarchs were responsible for some sparkling buys — the Vermeer, the Rembrandts — but it was George who supplied the matrix and the tone.

The show is arranged in two main spaces, with a haphazard mix of Dutch paintings in the opening room dominated by Rembrandts, four of them, notably a moving portrait of an old woman — Rembrandt’s Mother — acquired by Charles I in 1629. How exciting, as well, that a portrait of an old rabbi that had previously been placed in the “Manner of Rembrandt” category has now been proved to be by the master. Of course it’s by him. The trademark mix of biblical beard, thick gold necklace and laser-guided penetrative gaze are unmistakeable.

Impressive though they are, these opening Rembrandts and their adjacent Lelys hardly qualify as paintings of everyday life. The old rabbi looks ancient enough to have walked out of Egypt with Moses. And that huge golden amulet around his neck throbs with so much supernatural light, I suspect it might contain a fragment of the Holy Grail. So it is in the show’s second space that you are actually confronted by a sense of the everyday: its magic and its meanings.

Ordinariness was Holland’s great gift to art. With a touch of perversity, the Queen’s Gallery has given over its grandest room to a ring of paintings that seem actively determined to privilege the humble over the posh. In and out of kitchens we go. From tavern to tavern. Sometimes we step into the courtyard. Mostly we stay indoors, in dark wooden interiors, watching everyday people making their debut on the great stage of art for complex and mysterious reasons.

Rembrandt’s first pupil, Gerrit Dou, gives us a young girl chopping onions in an especially gloomy kitchen. Her onions are so magnificently humble, it seems almost a waste of Dou’s remarkable mimetic talents to record them so perfectly. But this is no ordinary ordinariness being celebrated here. This is an ordinariness freighted with big meanings. Like the rabbi, Dou’s onion girl stares out at us with a gaze that seems to lock us in a wrestling move, as if she’s trying to tell us something important.

And so it proves. The caption reveals that the painting has a secret message as a lament on the loss of virginity. Onions were considered aphrodisiacs in 17th-century Holland. The dark jug in the foreground, the one lying on the table with its lid flipped harshly open, that’s a symbolic jug.

As we pass from murk to murk, there’s plenty of reading between the lines to do. Perhaps that’s why, in our own times, Dutch genre scenes have remained so stubbornly unfashionable. Every museum, it seems, has long stretches of them: the stretches we hurry past. It’s a question, too, of dimensions. The paintings here seem to come in only three sizes: small, very small, and — in Dou’s case — extra-small.

The situations are also repetitive: maids in kitchens; wenches in taverns; grocers and grocery girls. It’s as if the same handful of ingredients has been used to bake all the cakes.

Jan Steen, tavern painter supreme, is superbly represented with a veritable pub crawl of lowlife imagery that takes you from one drinking den to another, from card game to card game, all the while noting how the men are always groping the girls, and how the girls have a faded look to them, as if life is forever a struggle. In every instance, it’s the details that speak. From a distance, you have a tavern scene. From close up, you have a pint-sized moral universe, filled with telling observations on humanity’s conduct. The largest of Steen’s pub interiors is actually cataloguing the deadly sins of idleness, avarice and lust. And that smiling woman playing cards in the corner, the one giving you the eye, she’s a prostitute who’s here to embody an old Dutch proverb: “Whores hold all the cards.”

The mix of fabulous detail and mysterious meaning that you get in the paintings of Dou, Gerard ter Borch, Gabriel Metsu, Steen and, of course, Johannes Vermeer had me leaning ever closer, gorging on nuances. Vermeer, whose Lady at the Virginals with a Gentleman (c1660), acquired for the Royal Collection by George III, is the show’s high spot, adds exquisite dreaminess to the recipe. With him, you get the fabulous detail, the beautiful light, the big meaning, but you also get a sense of time stopping still — of the everyday being put on hold because eternity has entered the room.

The Royal Collection needs to be applauded, not only for arranging such a fine selection of these deceptively quotidian goodies, but for bucking trends (in Bucking ’em Palace!) and leading the way in a re-evaluation of Dutch 17th-century genre scenes. Bravo, George IV.

At the National Gallery, where the Goya portrait show is wowing them in the Sainsbury Wing, a strange psychodrama is being enacted in Room 1 of the Trafalgar Square building. A portrait of Dona Isabel de Porcel, which we have all assumed was by Goya, and among his loveliest, has been separated from the main collection so that doubts may be expressed about its authenticity. Apparently, various people in the know no longer believe it is by him.

The reasons for these doubts are vague. Dona Isabel lacks the psychological intensity that’s usual in Goya’s portraiture, is one. Her mantilla has been ineffectually painted, is another.

I went along for a long stare — and found myself transfixed. The mantilla is marvellous. The psychology is superb. And if the Goya show downstairs proves anything, it is that he painted in many manners. I cannot for the life of me see why the National is beating itself up like this.
Masters of the Everyday, Queen’s Gallery, Buckingham Palace, London SW1, until Feb 14