The British Museum brilliantly explodes the myths of an ancient ‘race’ 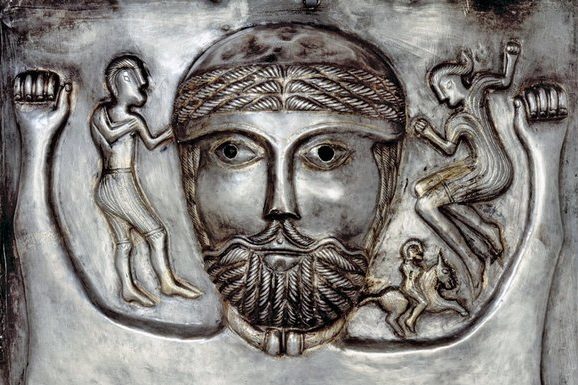 I have never wanted a tattoo. And certainly not a Celtic one. But were I ever to succumb to this popular urge, I now know what I would wish it to say. In florid Celtic tendrils, flanked by dragons, with interlacings, crosses, decorated capitals, the works, my tattoo would declare: I love Neil MacGregor.

Ever since he became director of the British Museum, in 2002, MacGregor has made it a priority to use the marvellous ancient holdings at his disposal to achieve a better understanding of the modern world. It happened with the Iran show. It happened with the Afghanistan show,and the Sudan show. Now, in an excellent moment of scholarly calmness, tinged with cheek, it is happening with the Celts.

As an au revoir, Celts: Art and Identity is perfect. Not only is it full of fascinating objects, as usual, but the cultural truths it seeks to convey are huge and enormously appropriate. Scottish nationalists, Welsh nationalists, Irish nationalists, Celtic fantasisers everywhere: see this show. In his final lecture, the brilliant MacGregor is addressing his own people.

In a nutshell, the Celts have never existed. From the beginning, they have been a work of fiction, a trick of the light, a shadow on the wall. Of course there were real groupings there, with corporeal identities. But in the flesh, in the test tube of genetics, their gatherings have never formed anything solid enough to warrant a Linnaean identity as the Celts. Only in the mind did they become that.

It’s a point the display makes with its first sight, a cultural Calvary created with three telling objects: an Irish harp of the type that became the Guinness logo but was actually made in Scotland; a Welsh banner covered in exclamations of Cymric pride that is carried at the opening of the Eisteddfod, the festival of Welsh poetry and music that was originally mounted by a group of “bards” on Primrose Hill in London, in 1792, but finally became a Cymru event in 1858; and a standing stone decorated in the insular style whose pretty “Celtic” interlacings have successfully inspired all those tattoos and album covers.

A caption spells out the show’s agenda with a clarity that feels almost brusque: “The word ‘Celt’ has had many different meanings over the past 2,500 years. Celtic identities have been reinvented over time and are cultural rather than genetic.” So stick that in your pibell, all you Ossian-loving Druidic bards out there.

The show ahead runs chronologically through the various identity mixes that have created the fluid concept of the Celts. The first mention of them is in Greek writings circa 450BC, when they were named as the inhabitants of those parts of Europe that were not Mediterranean: that’s as specific as it got. There were Celts in Turkey and in Spain. Celts all over central Europe. Celts by the Danube. Celts by the Rhône. The only place that seemed not to have any was Britain.

As is usual in the British Museum’s blockbusters, the story is told with a twilit mix of objects and texts. The first few cases can draw only a sketchy picture of these pan-European Celts, who must have been 1,000 nations, not one, and who could just as easily be described, in the scholarly language of the past, as barbarians.

We know they liked to drink, because they have left behind a few hefty bronze flagons decorated with dogs and ducks, and because Greek writers go on about it. Around their necks, they wore torcs as thick as pythons, beaten out in bronze and gold. And on their shields, they began to raise the abstracted circles and twirls that are, already, a signal of Celtic art. If one of the messages here is that the Celtic identity is a construct, another is that art is the glue that holds the construct together. Indeed, the only thing that does.

Among the most telling of the early cases is a small one containing two snake bracelets. One is Roman, the other “Celtic”. One is gold, the other a grubby brown metal that may be bronze. One is elegant and exquisite, the other lumpy but full of vigour. It is left to the Danish branch of the pan-European Celts to give the show an object that wows us with its magnificence, as well as educating us with its details. The Gundestrup Cauldron was dug out of a bog in Jutland in 1891. Huge and silver, big enough to fill a tribe with grog, it is decorated all the way round with staring faces and prancing animals, some of which are difficult to believe. The big ones with the tusks and the trunks are surely elephants. Whoever made this had been around.

Interestingly, these first European “Celts” now disappear from recorded history for 2,000 years. In Roman descriptions, they transform, confusingly, into Gauls. And it is not until the 16th century that a trawl through classical sources by nationalistic Renaissance scribes begins the rediscovery of the Celts.

The lost millennia are given every chance to solidify into something tangible by the exhibition-makers, but never quite manage it. The Romans never mention the Celts in Britain. And the ancient peoples they encountered here left behind scant visual evidence of their identity. Their brooches grow larger and more ornate. Their torcs hit upon the excellent solution of including a hinge — to fit more easily around those big, bellicose necks — but little else survives that is eloquent, until we get to the Christian years, when the melding of Christian symbolism with Celtic decoration produces the most impressive exhibits. Yes, the re-creations of stone crosses from the Hebrides that tower over the middle rooms are fibreglass. But they speak immediately of power, confidence and invention.

All this is marvellous. Where it becomes startling is in the final section, where a blow-by-blow account of the adoption of Celtic identity by assorted British fantasists from the 16th century onward is sometimes fruitful, and sometimes silly. The first depiction of the Picts, by John White, from 1585, shows them covered with Native American tattoos and wielding Turkish scimitars! The great ancient bard of the Celts, Ossian, turns out to have been a forgery, made up by the Scottish poet James Macpherson.

Finally, then, this is a show about how fluid identities become lumpenly concrete in the imaginations of the gullible. Thank you, Neil MacGregor. We’ll miss you.
Celts, British Museum, London WC1, until Jan 31