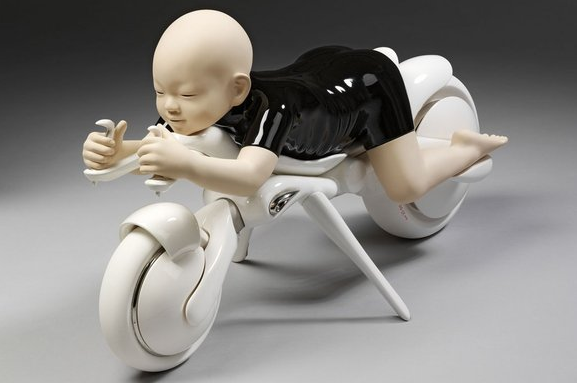 The V&A’s task as a museum is to spot the direction of the different design journeys taken by the decorative arts around the world. It’s a fiendishly difficult task. Much harder than the National Gallery’s simple role of collecting great paintings, or the British Museum’s gobbling up of everything from everywhere. At the V&A, they need first to identify the lines of design, then to acquire the best examples of them, then to arrange them in ways that communicate not just the thrusts, but also the sidesteps. It’s always tricky. But it’s especially tricky with a design identity as complex and different as Japan’s.

Japan and Britain are very similar. Events in the Second World War may have clouded these similarities, but if you look at a globe, you will see they are essentially mirror images of each other. Both are island nations cast adrift at the ends of continents — Britain to the west of Europe, Japan to the east of Asia. As island nations, both are psychologically insular and deliberately separate from their neighbours. Both are compact in land mass and have had, therefore, to display considerable ingenuity and invention in enlarging themselves: Britain by conquering large chunks of the world and building an empire out of them; Japan by making things that large chunks of the world want to buy.

Those are the similarities. For an immediate sense of the differences, visit the gorgeous encapsulation of the main thrusts of Japanese design that has somehow fitted itself into the compact spaces of the Toshiba Gallery, the latest of the V&A’s impressive series of reorganisations of its displays and collections.

The way these V&A encapsulations work is to identify the main national design lines, then follow them chronologically, from as far back as they go to today. Here, the first characteristic that strikes you in the opening moments of the show, and continues to strike you all the way through, is precision. Blimey O’Riley, but the Japanese are precise. It’s immediately evident in the intricate manufacture of the first samurai armour you encounter, with its hugely complicated layerings of leather and iron arranged in scales like those of a snake. Our armour was solid enough to halt a spear. Their armour was flexible enough to make ninja somersaults possible. Stunning.

As for the swords they used, the gathering of them presented to us here is, frankly, mind-boggling. For obvious evidence of the Japanese taste for precision, you cannot improve on the fabulous minimalism of the samurai blade made by Morimitsu of Osafune in Bizen, circa 1400. A slow bend of steel, curved perfectly so it would glide out of the scabbard in one movement, the cutting edge is so geometrically precise, it’s impossible to believe it was created with a hammer and tongs, rather than with laser-guided tungsten technology. Vorsprung durch Technik that’s 600 years old! Wow.

The second design quality you notice is miniaturisation. The Japanese have a natural aptitude for it, and that aptitude has fired some brilliant design solutions. A case full of netsuke, the little toggles with which bags were attached to belts, shows off a remarkable national ability to cram masses of information into a minute space. Look carefully at the tiny conker with the small point sticking out and you’ll see it’s actually the curled-up figure of a rat sniffing the air, carved, astonishingly, out of a thimbleful of cherry wood.

Even more ingenious than the netsuke are the inro, the small bags to which the netsuke were attached. Barely large enough to hold a cigarette lighter, they managed, somehow, to hold everything their wearer needed for the day. Phew!

By following these design lines to the present, the V&A’s display illuminates the modern world as helpfully as it does the past. For successful miniaturisation, you need look no further than the first Sony Walkman, made in 1979, a portable orchestra small enough to fit in your pocket. Or what about the mobile phones that followed, each progressively slimmer and tinier than its predecessor? As a crowded nation in which space has always been at a premium, Japan has pointed the rest of the world in the direction of a superconducted, microprocessed nano future. Sony made the leaps. Apple made the profits.

The third design quality you notice is something I can only think to describe as “minimal elegance”. It’s an elegance that depends on radical simplicity and the finding of a perfect line. We’ve seen it already in the shape of that samurai sword from 1400, but it’s just as evident in the outlines of the two courtesans drawn by Utamaro in his delightful woodcut of 1797. All Utamaro needs to evoke their faces is one perfect line. In art like this, Japan taught the rest of the world how to dispense with clutter and find beauty in simplicity.

All this is more than good. It’s actively wondrous: globally shape-shifting and prescient. In ways that are deeply mysterious, Japanese design appears to defy time. There isn’t a single object in this display that looks broken, faded or old. From the magnificent lacquered chest made for Cardinal Mazarin in 1640 to the woven bamboo basket created by Tanabe Shochiku in 2014, everything looks new, as if it had been created in the same national outburst of design.

Alas, there is a downside to this curious resistance to time: infantilism. A culture that has developed an unreal relationship to ageing is a culture that refuses to leave the nursery. How else to comprehend the presence here of a Hello Kitty rice cooker, coloured bright pink, or the so-called Lolita look, a fashion adopted by young women in the 1970s to dress in layers and petticoats, in imitation of Alice in Wonderland?

The present display tries to give this unfathomable infantilism an adult twist by labelling it officially as kawaii — cute. You see it as well in a weird ceramic sculpture, created by Hayashi Shigeki in 2013, of a grinning baby astride a speeding motorcycle. If they ever lower the driving age to one and a half, and find a way to transfer the brain of Marlon Brando in The Wild One into the body of a prenursery toddler, this is a sight that could become common on the roads.

I say “if”. The worrying thing here, given Japan’s spectacular record of cultural prescience, is that kawaii is a global taste waiting in the wings. And that grotesque infantilism is everybody’s future.