Rembrandt has been something of a stranger on British shores recently. For many, he is nothing less than the greatest painter of all time. But his work is so precious that museums do not generally want to lend it. And a feeling persists, perhaps, that everything that needed to be said about him was said long ago. But, of course, it wasn’t. Not only does the selection of his “late works” that has arrived at the National Gallery feel as if it has been taught how to have an impact by a volcano, its understanding of his motives adds up to a complete rewrite.

Rembrandt was only 63 when he died. He was no Michelangelo or Titian, beavering away grumpily into his eighties. The current show chooses, therefore, to define his “late works” as the art produced from about 1650, when he was in his early forties, to his death in 1669. Also unusual is the way these early “late works” appear to define Rembrandt as a whole. There is a tendency to see his last phase — with its exceptionally brave paintwork and its profoundly moving subject matter — as the culmination of an inevitable journey.

The present show questions the validity of these soppy views. We begin with a magnificent ring of ageing self-portraits: half a dozen wrinkly Rembrandts staring at us simultaneously. Wow. To the modern eye, the scruffy old boy looming out of the dark like a tramp in a doorway looks to be nearer 70 than 40. Most artistic self-portraits are involved in some sort of flattery, but Rembrandt’s seem determined to make him look older, more clapped out, more unhappy. Look at that bulbous beer drinker’s nose and the shapeless down-and-out hair.

The usual explanation for this battered self-image is that it projects the mind-set of an artist who was down on his luck. Yet Rembrandt had lived long enough to experience a range of horrible reversals. His beloved wife died. His son died. His popularity waned. His fortune decreased. When we think of Rembrandt’s “late style”, we imagine an era defined by misfortunes. But before we buy into the myth that, by this stage in his life, Rembrandt was an entirely tragic figure, I recommend another look at a particularly wizened self-portrait, from 1661, borrowed from the Rijksmuseum, in Amsterdam — Self-Portrait as the Apostle Paul. It shows Rembrandt looking even smaller than usual, a tiny old man swallowed up by huge brown robes, holding a battered book of Jewish scriptures and gazing out at us pathetically. Yes, he looks beaten and spent. But that’s because he’s meant to be St Paul, not Rembrandt.

What we are shown here is not an old painter, down on his luck, but an old saint who recalled in his famous epistle to the Corinthians that he had “worked harder, was in prison more frequently, was flogged more severely and had been exposed to death more frequently” than the other apostles.

All these self-portraits are involved in a measure of role-playing and projection. This isn’t some doddery old painter pouring out his tragedy in a set of increasingly decrepit confessions. This is an unusually clever and calculating artist, at the top of his game, employing his own palpable humanity to set up a series of thunderously involving confrontations between his art and you. 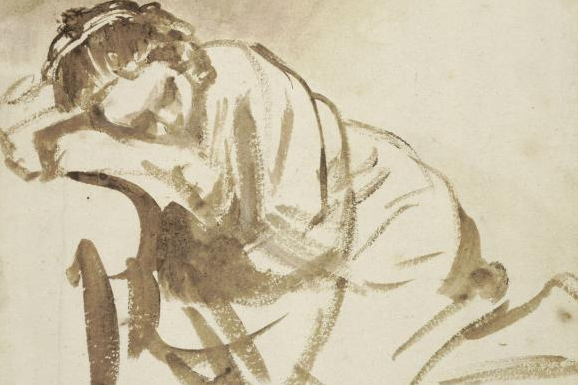 The exhibition ahead has been divided into clusters that progress the story in a pleasingly meandering fashion. Thus the section devoted to light is notable for its darkness. When it comes to employing masses of shadow to give an image power and heft, Rembrandt has no master. A set of etchings of the Adoration of the Shepherds is so dark, you can hardly see anything in them.

Those who have complained in the past about the quality of the loans arranged by the National Gallery for its blockbusters will find no reason to complain here. Who would have thought that the Royal Academy of Fine Arts in Sweden would ever have lent its resident whopper, The Conspiracy of the Batavians Under Claudius Civilis? Kenwood House has lent the imposing Self-Portrait with Two Circles, in which Rembrandt takes on the mighty role of the great classical painter Apelles, who could apparently draw perfect circles freehand. The Minneapolis Institute of Arts has lent its particularly poignant, and particularly anorexic, Lucretia.

These spectacular loans keep making the same point: that Rembrandt’s overriding ambition was to make things palpable. It is most noticeable in his religious art, where a cast of utterly tangible characters has replaced the impossible divinities who preceded them. In that especially great painting The Jewish Bride, again lent by the Rijksmuseum, the complex biblical narrative of Isaac and Rebecca, who pretended they were brother and sister when really they were husband and wife, has been condensed into a touching human drama centred on two hands. He grabs her breast. She stops him.

By reducing huge religious narratives to tiny human moments, Rembrandt speaks a language that everyone can understand. St Bartholomew, who pops up in a section devoted to contemplation, looks more like a 19th-century wage clerk, with his short cropped hair and his all-purpose clerical face, than a tragic apostle who is about to be skinned alive. The only reference to his terrible future is a small knife in his right hand that is easy to miss.

All this is very clever. Our emotions are being manipulated by an artist who has put his trust in quotidian reality. Not one of the six sitters in the superb group portrait known as The Syndics is handsome or glamorous or young. All of them are as gnarled and grey as a Tory cabinet.

In matters of sensuality, we are in the presence of a painter who has clearly learnt what he knows about the female body not from Greek statues or Titian Venuses, but from the female bodies themselves. The final nude in the show, the magnificent Bathsheba from the Louvre, is so tangibly fleshy and saggy, your knees can sense what her weight would be if she came over and sat on them.

Thus Rembrandt, the pictorial pioneer, works on all the senses. How does he do it? The answers lie earlier in the journey, in the section focusing on his experimental technique. One of the show’s aims is to highlight Rembrandt’s graphic work: his prints and drawings. Scattered through the exhibition, this riveting black-and-white output is always brave. When darkness is called for to make an emotional point, Rembrandt’s prints grow practically black. When intimacy is called for, as with his lovely sleeping nudes, his line grows so faint, it seems to be whispering.

We are, therefore, in the hands of an artist for whom the marks themselves — the artistic technique — are unusually active. And what is true of Rembrandt’s prints is doubly true of his paintings. What we are watching in this magnificent parade of blobs, splodges, ripples, scratches and rivulets is nothing less than a pictorial revolution: paint itself is being freed from its old descriptive role in the drama and handed a huge new part as a principal actor.

The portrait of Rembrandt’s son, Titus, doing his schoolwork at a desk, in the section on intimacy, is instantly charming. But as you lean closer and see how Rembrandt’s paintbrush has actually gone about describing the surface of the desk you encounter a swirling world within a world. There are abstract expressionists out there who made entire careers out of the few square inches of inventive paintwork that Rembrandt employs here.

So, a different Rembrandt. A truer Rembrandt. A greater Rembrandt. This column does not generally hand out stars to rate a show, but if it did, it would give this one 10 stars out of five.