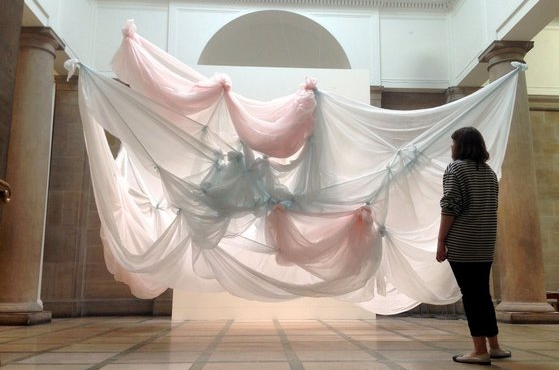 The Fates are up to their old tricks in Scotland, I see. In this year, of all years, they have arranged for an enormous exhibition to be mounted celebrating the vitality of Scottish contemporary art. To supply this happy event with a deep black shadow against which to stand out, they have set fire as well to the Glasgow School of Art, the effective and beautiful training ground that produced so much of this impressive crop. Damnit, there are even three Glasgow School artists on the shortlist of four for this year’s Turner prize. The Fates, it seems, are of the opinion we might be Better Apart.

Of course, it might not be the Fates. It might be the men in suits. If this were one of the great Machiavellian societies, such as Stalin’s Russia, or Mao’s China, or Serota’s England, where nothing cultural is allowed to proceed without a nod from the head honcho, there would be real reason to suspect the timing of Generation, as this huge effort is called. But Scotland has shown no previous signs of skill in the political deployment of contemporary art. And one of the most pleasing aspects of this event is the volume of the applause. A nation is excited about its art. It wants everyone to know.

Generation consists of no less than 71 shows, scattered about Scotland from Dumfries to the Shetlands. Getting to see them all would surely propel you into the record books. There are 20 displays in Glasgow. And 17 in Edinburgh. No one in Scotland is going to miss out on this good news.

The handful of shows I visited made no effort whatsoever to explain the contemporary success of Scottish art. Their task was merely to applaud it. Heaven knows what they put into the porridge at the Glasgow School of Art, but the number of impactful artists to have emerged from there in recent years is mightily impressive. From Douglas Gordon to Simon Starling, from David Shrigley to Jim Lambie, from Christine Borland to Lucy Skaer, from Nathan Coley to Martin Boyce, from Karla Black to Cathy Wilkes, Glasgow has been churning out artists of note as if there were no tomorrow. The epicentre of the current celebrations, however, is Edinburgh, where the Scottish National Gallery of Modern Art — ScoNGoMA! — has mounted an intriguing look at 25 years of Scottish contemporary activity.

It’s an interesting time span. Why 25 years? I am old enough to remember the emergence of a gang of noisy painters in the 1980s — Stephen Campbell, Adrian Wisniewski, Ken Currie, Peter Howson — who did more than anyone here to put modern Scottish art on the map. The 25-year cut-off point rules them all out except Campbell, who is remembered here as something of a father figure. If we are not celebrating all Scottish contemporary art, what are we celebrating?

The answers, when they finally become clearer — after the fourth show! — are intriguing. The first thing to note is the wide array of materials and approaches being employed. Where the Scottish painters of the 1980s were only painters, this lot are everything but painters. They make installations. They make sound pieces. They build. They project. They film. When they do paint, which also happens, it is never for clear-cut expressive reasons, but to make some elusive conceptual point.

Thus, Lucy McKenzie’s cork office board, pinned busily with clothing designs, looks fabulously real: a costume designer’s  mood board. But it’s actually a painting: a brilliant piece of trompe l’oeil. And the casual-looking odds and sods pinned to the painted corkboard are actually the clues to the picture’s bigger meaning. This is a painting behaving like a crossword puzzle.

The taste for elusive meanings continues through all the bits of Generation that I saw. Gordon, the show’s senior figure, who won the Turner prize in 1996, confronts us again with his epic 24 Hour Psycho, in which the scary Hitchcock masterpiece has been slowed down so much that it takes 24 hours to finish. With all the tension removed, all that’s left to savour is the nuances, the patterns, the clues.

Some of this determined conceptualisation must be down to the kind of teaching favoured by the Glasgow School of Art. But we should also recognise here a deliberate turning of the back on the obvious expressionism of Scottish painting. If exhibitions could speak, Generation would be saying: “We don’t do primitive expressionism any more. We are the artists of a New Enlightenment.”

Richard Wright, who studied at Edinburgh first, then Glasgow, but who still won the Turner prize in 2009, has painted the cupola of the main building with a swarm of tiny black honeysuckle blossoms that flock across the dome like a murmuration of starlings. 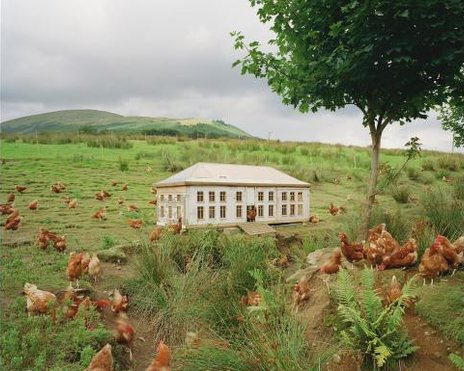 Speaking of Starlings, Simon of that ilk, who won the Turner prize in 2005, gives us a chicken coop modelled on a museum in Germany that was formerly a prison, but now houses the creations of Wilhelm Wagenfeld, a famed industrial designer of, yes, egg coddlers. A selection of those are included in Starling’s installation. Somewhere in this Spaghetti Junction of hints, comparisons and connections, something poignant is being said about the relationship between freedom and incarceration; chicken poo and designer goods; chaos and order.

I also liked Jonathan Owen’s mysterious film stills, in which the actors have been carefully removed with a rubber, leaving only the gentle imprint of their ghosts. In a nearby sculpture, Owen has transformed a marble bust of a general by chizzling out most of his head, leaving behind an abstract casing with a marble ball inside: the poor old general has become an alien puzzle ball.

Over at the Scottish National Gallery, Generation continues with the same  mood board, but in more spacious surroundings. As you mount the grand entrance stairs, trembling at the top is a fluffy indoor cloud created by Karla Black from the palest pinks and blues. It’s actually made with sheets of delicate rococo polythene that shimmer when you blow them.

Black was nominated for the Turner prize in 2011. The winner that year was Martin Boyce, represented here by an atmospheric urban installation, made of metal and neon, that seems to describe one of those late-night council playgrounds in which bored Kircaldy teenagers might meet and fall in love. Fall in love, note, not begin humping furiously, as they might in a Tracey Emin artwork.

An English show covering the same time span would be full of shock art and sex; destruction and nudity. But there are no Hirsts or Emins here; no Gilbert & Georges or Sarah Lucases. Instead, there seems to be a determined effort to create art that is less vulgar, less commercial, more poetic and dainty than its Brit Art equivalents. One set of values, you feel, is actively taking on another.

Shrigley, the clever funster shortlisted for the Turner prize in 2013, even manages to make death feel like a minor setback and no more, in a charming installation featuring a set of large black boots surrounded by typically insouciant announcements of the upcoming end. A joke at death’s expense? That really is New Enlightenment.

This is a lovely selection with a real sense of uplift to it. Better Together? Only if we follow them. Not the other way round.

Generation: 25 Years of Contemporary Art in Scotland runs until Nov 2