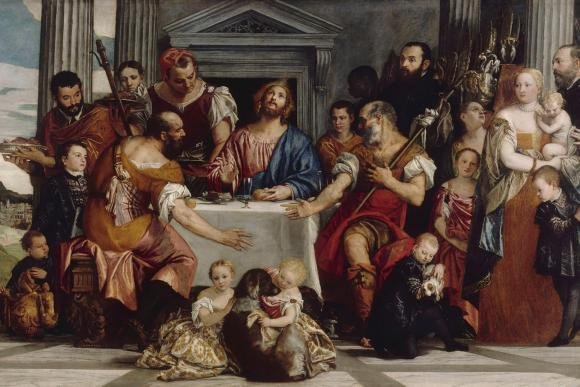 Not many Old Masters are as difficult to pin down as Veronese. His name prompts instant recognition, of course. Everyone knows that Veronese (1528-88) was one of the giants of the Italian Renaissance. And whenever we turn our attention to Venetian art of the 16th century, we habitually position him after Titian, and alongside Tintoretto, in a handy Venetian chronology. We know where he goes. We know he was a giant. It only gets tricky when we begin to list his accomplishments.

I had hoped that the magnificent celebration of his career that has now arrived at the National Gallery would clear up these doubts. It doesn’t. The exhibition itself is transfixing: the most beautiful display of Old Masters to have reached Britain in recent years. But while the calibre of the experience is obvious, its message is not. Even the show’s title —

Veronese: Magnificence in Renaissance Venice — promises nothing concrete. Magnificence is magnificent, yes, but what does it amount to in artistic terms?

Amazingly, this is the first significant exhibition about Veronese ever mounted in Britain. It contains 50 pictures, most arrived on these shores for the first time, some so huge they scrape the ceiling. To accommodate these whoppers, the gallery has exiled a large chunk of its permanent collection to far-flung corners of the building and turned over some of its finest top-lit spaces to Veronese. It’s an excellent strategy.

The opening room is devoted to his early work. It’s very varied. Born in Verona — hence Veronese — Paolo Caliari spent his first decade experimenting with styles. A dark and claustrophobic Temptation of St Anthony is especially surprising. Poor St Anthony, a bearded old boy lying on his back, is being beaten about the head with a goat’s foot by a naked satyr, while a sexy biblical temptress, who isn’t wearing much either, leans over him and digs her evil black talons into his hand. Ouch. What black and violent art: how unlike Veronese it seems.

The darkness of the St Anthony does indeed turn out to be unique. For the rest of the journey, we are in the hands of a brilliant and inventive colourist, for whom the natural light filtering down from the roof is the perfect accompaniment. Also in the opening room is a full-length portrait of Livia da Porto Thiene, in pink, and her daughter Deidamia, in green, which marks him out as a particularly skilled recorder of expensive fabrics. We don’t find out much about Livia da Porto Thiene’s character from Veronese’s exquisite presentation of her standing full length in a niche with her daughter, but we do see, exactly and thrillingly, what happens to the pink silk of her gown when you illuminate it from the right. Wow.

From the off, Veronese’s women shimmer with a pale and lustrous beauty, like the pearls around their necks. But the opening room also makes clear that his real forte was the arrangement of large groups of figures acting out moments of high religious or mythological drama. The first great example here, The Anointing of David, from about 1550, is already typical. Twenty or so figures — men and women, old and young, oriental and occidental, bare-headed and in colourful turbans — have gathered in a clearing in ancient Israel, which looks suspiciously like a clearing in Renaissance Italy, to watch David being anointed by Samuel. They form a jostling crowd. But you know immediately which one is David, because a gentle beam of sunlight has picked him out: he’s the pretty blond boy kneeling gracefully in the foreground. Veronese had just turned 20 himself, yet already he had mastered that notoriously difficult artistic accomplishment: the busy crowd scene.

In 1553, he moved to Venice, and in the three decades of achievement summed up by the how ahead, there’s very little sense of conspicuous development. Once Veronese had discovered what he was good at — perfectly captured textiles, fabulously inventive colour schemes, lustrous females, detailed crowd scenes — he stays good at them. The only significant change in his output is a spectacular increase in size.

The show makes a rather half-hearted attempt to compartmentalise his career by dividing it into clusters: portraits, altarpieces, mythologies, early works, late works. Apart from the small gallery devoted to his portraits, these attempted groupings barely succeed. With Veronese, you feel, there is always a bigger force at work — the overall thrust of his career — that picks up the attempted clusters and surges forward with them like a tidal wave that’s encountered some boxes.

This isn’t one of those rather desperate Old Master collections that seems anxious to show anything it can get its hands on. The quality of most of the imported art is remarkably high. I don’t know what leverage the organisers were able to apply on prospective lenders, but it has resulted in a thrilling set of loans. Several pictures stand out. The first is the Mystic Marriage of Saint Catherine, from about 1565-70, which has been lent by the Accademia Gallery, in Venice. Eleven feet high, packed with angels, musicians, saints, cherubs and servants, this particularly vertiginous altarpiece is set at the top of an imposing Renaissance staircase where Mary holds the baby Jesus in her lap while he grasps the hand of a blonde and irresistible St Catherine, to whom he is about to be symbolically married. Some gods have all the luck. In the sky above, a flock of cherubs buzzes happily. On the stairs below, an orchestra of angels provides the musical accompaniment. St Catherine, meanwhile, has turned up for the ceremony in a full-length wedding gown of outrageously beautiful silver and blue embroidery.

Just as much of a coup is the loan of the Martyrdom of St George, from the Church of San Giorgio in Braida, in Verona. Fourteen feet tall, and surely the most impressive altarpiece to have arrived in London since the Louvre lent its Madonna of the Rocks for the Leonardo show, this towering crowd scene would never have fitted into the National Gallery’s usual exhibition spaces in the Sainsbury wing. It only just makes it into these lofty halls.

Outside the confines of this show, Veronese was capable of being even bigger. Anyone who has seen his Supper at the House of Levi, in the Accademia Gallery, will remember a picture so huge that it needed to have an entire gallery built around it. While over at the Louvre, in the same room as the Mona Lisa, his Wedding Feast at Cana is 32ft wide and 22ft high. This is art that rivals the dimensions of architecture. The curious thing is, none of Veronese’s whoppers feels actively gigantic, or even especially imposing. Chief among his talents was an outstanding ability to remain graceful and perfectly balanced on whatever scale he was working.

It is also clear that his work was uninterested in noisy emotions. His biblical paintings and his pagan mythologies share the same calm tonality. Even a scene as packed with religious meaning as the Adoration of the Magi seems so elegantly staged. Frankly, you could transport the entire cast of Veronese’s Supper at Emmaus to the nearby scene of The Family of Darius Before Alexander and, with a bit of repositioning, a couple of small costume changes and the addition of a few pagan monkeys, one could easily pass for the other.

Here, I think, is where we find the reason for the recent neglect of Veronese: why there has never been a significant show devoted to him in Britain. The qualities he best exhibits — gracefulness, balance, harmony, lack of emotionalism — are qualities we no longer desire fully in our Old Masters. The Old Masters we favour these days, our go-to Old Masters, are dark and emotional painters like Rembrandt, Caravaggio, El Greco: masters of the night whose art throbs with religious passion. The calm and graceful Veronese doesn’t fit that bill.

So here’s a question: is this superb show a rare alternative to the Old Master norm? Or does it mark the beginning of a new sensibility? I hope it’s the latter.