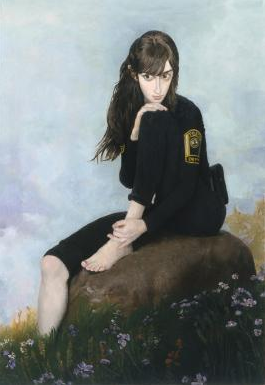 The Saatchi Gallery has never run with the crowd — I can’t imagine Charles Saatchi running, full stop, let alone in the same direction as everyone else — but never before has it felt quite as isolated and out on a limb as it does today. Geographically, it could hardly be located in a less arty neighbourhood than the King’s Road. There was a time when Chelsea was the centre of our art world, but today it’s where supermodels do their shopping, not where pre-Raphaelites do their challenging.

Saatchi’s recent domestic problems have also served to push him further away from art’s mainstream. He has never been welcomed, of course, by the management gonks of the British art world, but those deeply uncomfortable front pages have prompted a further relocation: from thepersona non grata corner into the one reserved for lepers. Over at Tate Britain, there is currently a display devoted to the art of Sylvia Pankhurst and the suffragettes. Another room examines the role of Women and Work. Where do the aesthetics of the King’s Road fit into that scheme of things? Nowhere, is the right answer. Always independent, the Saatchi Gallery has achieved a level of cultural isolation of which North Korea would be proud.

All of which makes it counterintuitively valuable. Say what you want about Saatchi, but the one thing you always get from him is independence of vision. Body Language, the latest offering at his gallery, is a classic example. The show presents an assortment of artists whose work features or refers to the human body. No films. No lightbulbs turning on and off. Just 12 painters, two photographers and five sculptors, continuing the investigation of what used to be known as figurative art.

On paper, such an effort ought to feel traditional. In the flesh, it doesn’t. Why? Because so many of the exhibiting artists are unfamiliar. When you go to see a show at, say, the Serpentine, you know exactly what you are going to get because you saw it at the Venice Biennale two years ago. The management team that runs the British art world — otherwise known as today’s curators — go to the same shows, read the same magazines, attend the same conferences and collectively decide on the same artists to favour at any given time. Saatchi, to his eternal credit, has always followed his own hunches. 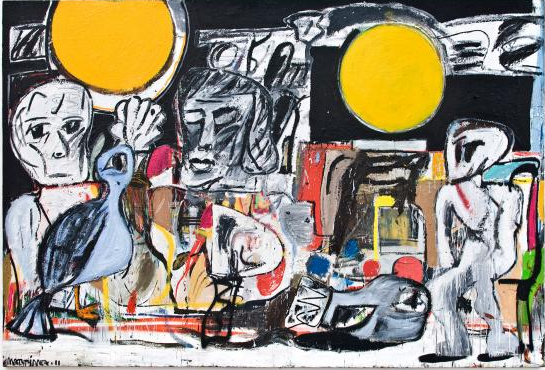 Where curators find artists by reading about them in Frieze magazine and discussing them at the Istanbul Biennale, Saatchi finds them by trawling the galleries of Peckham or the Meatpacking District of Manhattan. He puts in the miles; he makes the effort. That’s the difference. And it is why Body Language, about one of art’s most traditional concerns, has such a fresh tang to it.

Not that everything on display here deserves too much serious attention. Henry Taylor, who gets the show’s giant first room to himself, looks as if he studied anatomy by copying the stuff on the walls at his daughter’s nursery. Saatchi has always had a weakness for self-consciously “bad” artists — shoot-from-the-hip scribblers who make a virtue of their sloppiness. Taylor, who hails from LA and paints scenes from the street mixed with moments of snappy social observation, is a typical example.

Just as bad, and even shallower, is the Japanese painter Makiko Kudo, who does floaty landscapes inhabited by a dreamy cast of teenage boys and girls with cute, turned-up noses, à la Michael Jackson. If you know anything about Japanese manga, you’ll immediately recognise the comic-book origins of these limp forest dwellers and their ceaseless cosmic torment. The catalogue cites Monet’s Water-Lilies as one of Kudo’s inspirations and manga as another, which is spot-on and made me laugh. Good catalogue description, shame about the paintings.

Most of the art on the ground floor is feeble. Eddie Martinez, Dana Schutz and Helen Verhoeven are all based in New York, and all are slap-happy expressionists who paint before they think. All could do with spending less time in the studio expressing themselves, more time in a museum, learning something to express. Like unripe bananas, they seem trapped in a state of preparatory freshness.

So far, so bad. But then you ascend to the first floor, and suddenly everything gets better. The improvement starts with Chantal Joffe, a long-standing Saatchi favourite, who shows everyone downstairs how to be a contemporary expressionist. Joffe paints big pictures of women — mothers, nudes, fashion models, girls in the street — and gives them a powerful totemic presence. But the real joy of her pictures is the bold, wide, creamy brushwork. At last: brisk brushstrokes that know what they’re doing. 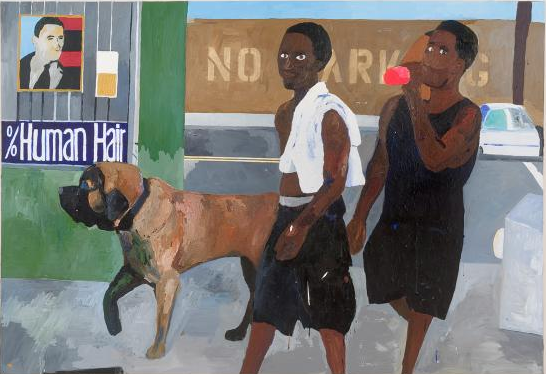 From here on, it’s almost all good. And most of the exhibitors are fresh to the market. Denis Tarasov is a Russian photographer whose images of mafia gravestones are simultaneously hilarious and sinister. The Russian mafia’s preferred mode of burial is to decorate their gravestones with a favourite photo of themselves. Thus, Tarasov’s rubbed-out gangsters set off on their journey to hell posing cockily with a new BMW or enjoying a magnum of champagne at a plush restaurant.

Tanyth Berkeley takes full-length photographs of an eerie cast of transvestites and albinos. The picture size is elegantly pre-Raphaelite; the cast list is freakishly Diane Arbus. Even more unsettling, because they are so ludicrous, are Jansson Stegner’s erotically charged portraits of New York policewomen pouting seductively in their uniforms. A sight I’d like to see — because I am such a wicked, wicked man — is Stegner’s paintings included in Women and Work at Tate Britain. The record for the insertion of felines among pigeons would surely be smashed by such a confrontation.