Shock news! The latest Turner prize show is the best yet — and its novel location is one reason why 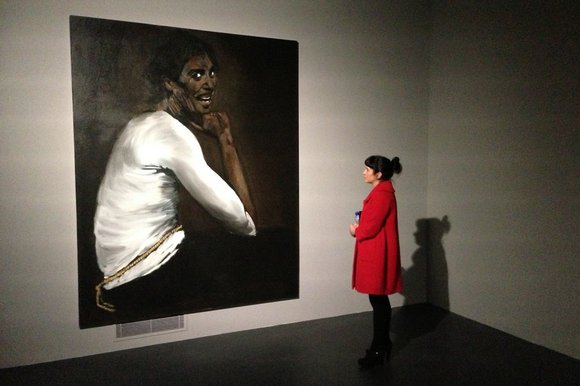 There have been 28 attempts at the Turner prize. I have the dubious honour of having witnessed every single one of them. The experience has occasionally been pleasurable. Usually it has been wearisome. A handful of times it has been utterly dire. So dire that I have begged in the past for its cessation. Imagine, therefore, my deep surprise — let’s even call it shock — at being able to report that the 29th Turner prize is the best yet.

When I say the best, I mean: the most important, the most telling, the most meaningful. Artistically, I can remember Turner displays in which the standard of the art was higher: displays filled with masterpieces. The 1995 show with a pre-corruption Damien Hirst and a brilliant Mona Hatoum springs quickly to mind. But even that powerful and visceral event could not boast the historic and symbolic clout of the 2013 Turner, brought to us, amazingly, from an army barracks in Londonderry.

It’s the Derry quotient that counts. Throughout most of the Turner prize’s action-packed history, this irritating, implausible, ridiculous event launched its irritations at us against a background of the Troubles continuing in Northern Ireland. The Troubles — what a grotesque political euphemism that was. On and on went the murder, the horror, the vengeance. For year after year, these same spaces that are now bringing us the Turner prize were having to survive a seemingly endless social and political nightmare.

Ebrington Barracks were built in 1841 to protect the loyalist population of Derry and subjugate the nationalists across the river. There’s a parade ground, some posh officers’ quarters and a ring of absurdly pleasant whitewashed cottages in which the British forces stationed in Northern Ireland would hug their beds and hope. These were the barracks from which Bloody Sunday was launched in the nearby Bogside. Today, as part of Derry-Londonderry’s stint as the UK’s first City of Culture, the same barracks have been converted into the most unlikely suite of trendy art spaces in Britain and asked to display a selection of works by the artists shortlisted for the 2013 Turner prize: Laure Prouvost, Tino Sehgal, David Shrigley and Lynette Yiadom-Boakye. Hah!

You will have gathered by now that it is the unique combination — confrontation? — of event and site that makes this particular Turner so startling. An old boy in a pub told me he’d never actually seen the Ebrington site before — even though there are 26 acres of it, positioned unmissably high on the banks of the River Foyle — because of the tall perimeter fence with barbed wire and guard towers that encircled it for all those decades. The IRA never got in here. Now art has. I repeat — hah! The extraordinary surroundings of Derry have given the 2013 Turner prize a context of such unshakeable weight and importance that it causes this silly jamboree to enlarge before your eyes into an event of genuine historical significance.

The first artist, David Shrigley, is actually the comedian in the pack. Mixing comic sculpture with comic animation and a comic sense of gallery timing, Shrigley does for this display what a good joke does at the beginning of an after-dinner speech: it breaks the ice. Shrigley’s retrospective at the Hayward Gallery in 2012 — the reason for his inclusion here — was a particularly jolly event: art galleries are rarely home to this much humour.

For this showing, Shrigley re-creates that instrinsically comic artworld situation: the life class. In the middle, an extra-large nude model made of resin and clockwork adopts a contraposto loosely reminiscent of Michelangelo’s David and poses gawkily for the ring of artist’s chairs arranged around him. The idea is that visitors can join in with the life class, draw the Derry David and have their efforts displayed on the wall. Art is being taken down a peg or two. Occasionally, in a cheeky display of advanced animatronix, the nude David has a pee in a handily placed bucket. It’s a fun installation: welcoming, cheeky and inclusive. Does it deserve to win? No. Does it do a good job of signalling that art can be for everyone? Yes.

Laure Prouvost is an atmospheric creator of installations and videos that feel authentic, but aren’t. You need to watch out in her presence. Her art is spinning you a yarn, but never makes it obvious. For Derry, she has created a lakeside cabin supposedly inhabited by her grandad — a conceptual artist — and her grandma — a ceramicist who makes teapots shaped like women’s bottoms. Casting herself as a dutiful granddaughter paying tribute to her decrepit grandparents, Prouvost revisits their home in a film and re-creates some of it in an adjacent installation.

As the story of the fake grandad and grandma unfolds, you slowly realise that none of it is true. Grandad didn’t really know Kurt Schwitters. Grandma didn’t really eat all those packets of crisps. Originally from France, Prouvost is scarily adept at re-creating the artistic decrepitude she celebrates in her film. It might all be a pretence, but it’s a pretence, you feel, based on authentic experience.

The show’s most exciting exhibitor comes next: Lynette Yiadom-Boakye. She’s exciting because she paints figures in a landscape — yet manages to make this thoroughly ancient art-world activity feel thoroughly updated and fresh. Of Ghanaian descent, Yiadom-Boakye puts blackness at the heart of her art and paints it with startling directness. All the figures in her show are black. All are observed in subfusc lighting. All have their blackness exaggerated by startling contrasts with moments of whiteness.

Thus the two boys taking off their white socks in The Generosity are wearing white underpants as well. And the black man grinning at us from the painting known as Bound Over to Keep the Faith is wearing a white jumper as he flashes his white teeth at us in a disconcerting grin. His pose, I fancy, is based on Caravaggio’s Sick Bacchus in the Borghese Gallery in Rome, as is his surprising grimace and even his indeterminate sexuality. On its most obvious level, this then is contemporary black art elbowing out some space for itself at the table of the old masters. But what I really admire about the show is Yiadom-Boakye’s revolutionary use of black paint. It’s hardly a new colour in art: but never before has it claimed a creative identity as fierce and tangible as this. I hope she wins.

I also hope Tino Sehgal doesn’t win. As the art world’s current darling, Sehgal has been the subject of too much recent attention. His art consists of setting up situations in galleries involving visitors, actors and attendants. At the Venice Biennale this year he placed a troupe of writhing beat-boxers in the show’s main gallery and had them throbbing and wailing across the gallery floor. I thought it was pretentious and tedious. But the Venice authorities gave him a prize for it.

In Derry, in a piece called This Is Exchange, he has placed a volunteer in the final room and given him the task of engaging you in a conversation about market economics. You walk in, you speak to him, and if you do it well enough you are refunded half of your entrance fee. So it’s yet more visitor involvement; and the economic topic is undoubtedly relevant to Derry today. But the meeting didn’t spark into life when I had a go. It felt phoned in. And its artistic quotient was zero.

Sehgal is the show’s only disappointment. Who cares! When I wrote earlier that I hope Yiadom-Boakye wins, I forgot that we already have two huge winners. Derry and the civilisational process.