The National’s Saints Alive is Waldemar Januszczak’s show of the year. 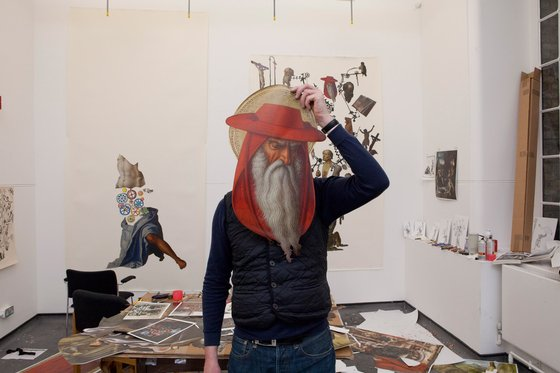 The Associate Artist Scheme at the National Gallery has not been a great success. Yes, the notion of giving a contemporary artist a studio, tons of resources and full access to the collection for two years has looked good on the gallery’s CV. But the results have been patchy. Of the eight artists so far, half were thrown in above their talent grade. Of the rest, Peter Blake and Paula Rego had the required heft, but seemed trapped in a master-and-pupil ­relationship with the past and ended up painting homages. The seventh, Ron Mueck, made brilliant art at the National Gallery, but you felt he would have made the same work wherever he was. His contribution simply wasn’t site specific enough.

What a relief, therefore, to be able to report at last on an unqualified success. Indeed, Michael Landy’s entertaining and punchy response to his holiday in Old Master heaven is already one of my shows of the year. Displaying not a single gram of the sense of contemporary inadequacy that caused his predecessors to tiptoe so ­sensitively through their daunting task, Landy has set about the National Gallery’s holdings with the sort of bruiser’s gusto that Gordon Ramsay displays when he takes over someone’s kitchen. “Wake up, all you old f****** at the National Gallery. Michael f****** Landy is here!”

Not that Landy’s effort is totally lacking in sensitivity. He’s not that much like ­Ramsay. His show is actually a formidably intelligent and carefully nuanced response to some darkly religious aspects of the ­collection. It just doesn’t look like it straight away. Or, indeed, sound like it. Before you see it, you hear it. A terrifying banging will have you fearing that a lunatic with a sledgehammer is destroying the Crivellis. What a racket. When I went, it was audible from three galleries away. The health-and- safety people were already in there, having a confab, so perhaps they have turned it down now. I hope not. A bit of brutal audio disturbance as you study the Van Dycks is a small price to pay for an outstanding ­contemporary intervention into the sleepy affairs of the Old Masters.

The first thing you’ll see is a woman, about 8ft tall, repeatedly pulling out her teeth with some pliers. Bang, bang, yank, yank. She’s dressed in a neck-to-ankles red robe, and her hair is that lovely no-­nonsense yellow that damsels sport in medieval art. The sharp-eyed among you will feel you know her. If you’re really clever, you’ll think: “Cranach the Elder, St Apollonia, 1506.” And you’d be spot-on. The blonde giantess is an enlarged and automated 3D version of Cranach’s lovely portrayal of that Christian martyr, who had her teeth pulled out by the Romans, but who threw herself on a fire rather than convert to paganism. She is now the patron saint of toothache.

Lured deeper into the show by its thunderous banging and clanking, you’ll pass more and more of these unholy robotic saints, built, seemingly, by a demented rag-and-bone man and chosen mainly from the ranks of the most inventively tortured Christians. All have been discovered in paintings regularly on show at the National Gallery. A donation box topped by a life-sized figure of St Francis bangs itself on the head with a crucifix when you put in some money. A huge St Jerome with a naked torso, borrowed from a painting by Cosimo Tura from 1470, hits himself continuously on the chest with a big rock, as Jerome was said to have done when he sought forgiveness for his sins. Another huge St Francis, this time headless, can be dipped into at the neck with one of those gift-grabbing arms you find in arcades that pick up a goodie with a claw and always seem to drop it. Here, a few lucky winners will ­successfully grab a St Francis T-shirt.

Thus the mood of the fairground has been visited upon the world of the saints in an astonishing display of contemporary irreverence. All the automatons are activated by members of the audience and require an energetic stamp to send them clanking into action. While the figures have been discovered in the National’s paintings, the general look of the machines, with their crude and clanking engineering, is instantly reminiscent of the madcap kinetic art ­produced in the 1960s and 1970s by Jean Tinguely, whose wonky sculptures whirred, banged and clattered uselessly as they spoke directly to your inner kid. Which is what happens here, as well.

Apparently, the first saint to catch Landy’s eye in the National’s collection was St Catherine of Alexandria, across whom the Romans were said to have driven a huge wooden wheel studded with body-ripping spikes. Hence the catherine wheel. Wandering through the gallery, Landy counted no fewer than 37 picturings of Catherine and her fate. He commemorates her story with a huge wheel of fortune modelled on the implement with which she was ­tortured. You give it a spin and wait for it to stop on a prediction. Mine slowed down on “You will remain a virgin for the rest of your life”, but actually creaked to a halt on “You are beautiful, loved and admired by everyone”. So it’s pretty accurate.

Of course, some will be offended by all this stinging religious insouciance. But by dealing so unpredictably with the stories of the saints, Landy is guilty only of following their lead. The story of Jerome pummelling himself in the chest with a rock is already outrageous. And the idea of St Lucy plucking out her own eyes and sending them to her pagan lover to stop him praising her beauty — a tale Landy commemorates with some splendidly wobbling eyes on a plate — doesn’t need contemporary exaggeration to make it chilling.

The show sports an assortment of collages as well, inspired by these same bizarre death stories. Busy with pointless machinery, they make clearer Landy’s debt to the dadaists, whose self-appointed task in 1916 was to point out to the world how absurd it had grown. Something similar is going on here, with an occasional peep into religion’s dark heart. In the show’s most extreme and finest sculpture, a ­powerful disembodied arm thuds a vicious finger into a wounded chest. It’s Landy’s evocation of the weird biblical story of the doubting apostle, Thomas, whom Jesus instructs to insert a finger into his wound to prove he has come back from the dead. Two millennia of repetition may have smoothed such stories into an untroubling familiarity, but if you actually consider what is being des­cribed in them, you encounter a world that is ex­ceptionally bizarre, violent, surreal and unlikely.

Landy, to his great credit, is re­­acquainting us with it and, in the process, bringing back to life a host of fabulous pictures scattered about the National Gallery, towards which he sends us scampering.