After years of thematic muddle, Tate Britain’s clear and chronological rehang has at last given us a proper national museum, while turning up lost treasures. 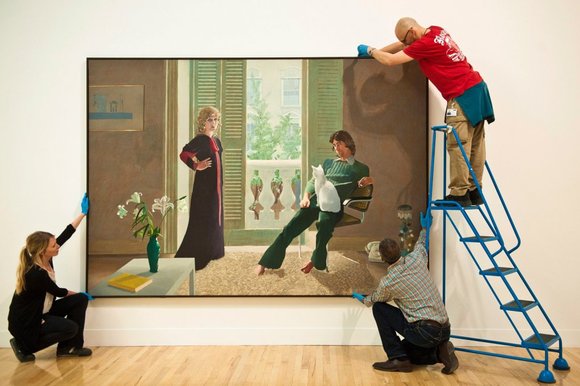 When the old Tate was split asunder in 2000, creating Tate Modern on one bank of the Thames and Tate Britain on the other, it was the modern half that grabbed most of the attention. It wasn’t any old year. The 21st century had arrived. The future was here. In those loaded circumstances, it was inevitable that Tate Modern should feel like the more pertinent of the two institutions. Housed in its impeccably jazzy new headquarters in a converted power station opposite St Paul’s, Loft Tate seemed to stand for everything that was groovy about Cool Britannia. Young, international, converted, this was more than an art gallery. This was the national way forward. The other Tate, meanwhile, the one stuck inside a building that tries to look like a Greek temple, the one ­occupying the site of the former Millbank prison, that Tate stood for yesterday. Or so it seemed.

It was actually Tate Britain that had the more difficult task. Compared with the complicated business of defining and charting a national art identity, being modern is a doddle. You just open the doors and let today flood in. For a culture as obsessed with appearing progressive as Blair’s Britain was, getting Tate Britain right was a tough ask. And, of course, they blew it. The opening hang was a disaster. Plumping for a thematic mess that lumped together all the styles from all the eras, Sad Britain tried so hard to emulate Loft Tate that its efforts were embarrassing.

The intervening decade has done little to erase those grim memories. While Tate Modern hoovers up visitors, praise, planning permissions and dosh, Tate Britain has continued to feel mildly unwanted, like the grumpy aunt you have to invite to the wedding. A floor-to-ceiling rewrite has long been inevitable. And, given the history of the situation, I awaited the results with dread. The new hang needed to confront a flotilla of problems, the biggest of which was the quality of the collection itself. Having previously been two museums squashed into one, a modern collection and a national one, the Tate’s holdings in ­British art are famously lacking. In the past, the gallery had preferred to lavish its resources on the glamorous modern bits, rather than the dusty old parts. There was a shortage not only of important ­historic examples, but of the ­scholarship that went with them.

That is no longer true. Indeed, it is dramatically, amazingly, wowingly not true! Out of the blue, against all my expectations, the rehang of Tate Britain has somehow conjured up a miracle. Not only have we finally got a journey through British art that makes sense, a journey that roars excitingly through the action from Tudor times until today; not only does the whole place look brighter, fresher and better; but those huge gaps that seemed previously to disfigure the Tate’s holdings have somehow ­disappeared. Suddenly, we have a proper national museum on our hands.

The key decision was the ditching of the themed displays and the return to a legible chronology. Where previously you didn’t know why anything was ­hanging here instead of there, we now have a timeline to position us. Starting at the top of the gallery and sweeping clockwise through the centuries, the story of British art progresses coherently in a sensitive mix of paintings and sculpture. Where has all this exciting art ­suddenly appeared from? Has it always been there? Why does so much of it feel as if you are seeing it for the first time?

The opening room, the Tudor one, is filled with exquisite female portraits in that enchantingly detailed English ­manner that appears more interested in the clothes than the faces. It is usual to dismiss this sartorially obsessive portraiture as provincial, but the current display presents it instead as something idiosyncratic, particular and delightful. Which it is. Among the masterpieces included here is that gorgeous Holbein of A Lady with a Squirrel and a Starling, lent by the National Gallery. All along the journey, the bigger gaps have been painlessly plugged with loans. Simples.

Holbein was the first of the crucial ­foreigners who are recurrently seen ­helping to make British art what it is. I didn’t count as I went round, and can offer only a crude estimate, but the ratio of foreign to native-born artists in the earlier stretches of the display must be 70:30. Holbein, Eworth, Gheeraerts, Van Dyck, Lely, Kneller, Canaletto — on and on goes the roll call of influential immigrants. Thank God UKIP wasn’t hogging the limelight in the 1500s, 1600s, 1700s, 1800s, 1900s or most of the 2000s.

That said, the quality and tenor of the contribution made by the lesser-known native artists discovered in the stores is another of the display’s delights. John Bettes, Henry Gibbs, Edward Collier — where have these obscure early natives been skulking? How immediately English their work feels. Anyone who doubts the existence of a national tone should examine the market scene painted by Nathaniel Bacon in the 1620s, showing a busty serving wench in a low-cut dress pointedly holding up a melon. You could draw a line of descent from that cheeky 17th-century image straight to the saucy postcards of contemporary Blackpool.

Having been scandalously neglected in previous hangs, the Tate’s historic ­collection is here given the space it needs to impress. All along the journey, key works that the gallery has always owned, but which never fitted the themed displays, have been rescued from the basement, resulting in a surge in quality.

How crazy it was not to keep pictures as thrilling as Bomberg’s The Mud Bath or Gertler’s Merry-Go-Round on ­permanent display. It’s like leaving your best players out of the team because their hair is the wrong colour. Give or take the odd ­pre-Raphaelite favourite that is away on tour — Millais’s Ophelia isn’t currently here, nor The Death of ­Chatterton — all the iconic works in Tate Britain’s collection will now be on show when you visit.

The results can be actively thrilling. The 1960s gallery has a corner in which Caro’s wonderful red metal masterpiece, Early One Morning, stares across at a big Francis Bacon triptych, with Hockney’s A Bigger Splash behind it, and a Bridget Riley, and a John Hoyland, then Hockney’s portrait Mr and Mrs Clark and Percy. Six iconic works in one vista. It’s such a simple policy. Why did it take so long to implement it?

Also impressive are the impeccable display decisions that have been taken. The early galleries, tastefully painted a helpful grey, include modest quantities of sculpture that make things feel a tad more tangible. The Stuart rooms have Le Sueur’s bust of Charles I. The Restoration space has a turbulent James II. As we move through the centuries, the presence of helpful sculpture increases and grows in centrality, and by the time we reach our own times, symbolised here by a ­welcome appearance by the entire Chapman brothers’ Family Collection, the point has firmly been made that British art has a special relationship to sculpture.

Not everything is perfect yet. Although the dreaded thematic approach has been dispensed with in the chronological ­voyage round the Tate, it survives in ­corners and continues to cause havoc. Turning left out of the 18th-century room, I found myself in a gallery suddenly devoted to the 1960s conceptual photo­grapher Keith Arnatt. I admire Arnatt’s art, but blundering into it after Stubbs and Gainsborough is merely confusing.

Later, as I tried to ponder the ­implications of a charming display devoted to Constable’s Cornfield, my concentration was repeatedly shattered by what seemed to be the groaning of a wounded elephant giving birth. It turned out to be the soundtrack of a dreary Simon Starling installation playing in the Duveen Galleries. A simple tightening of the rules to keep historic displays on one side of the Tate and contemporary art on the other will sort that out.

There are imbalances as well in the Tate’s holdings, which have duly imbalanced the opening display. There is, for example, far too much Henry Moore on show. Duck out of one gallery packed with him, and you walk straight into another. How outsized and ­lumbering his mass-produced bronzes appear when compared with the delicate handiwork of Barbara Hepworth. While she hand-smooths and colours her beautiful woods, Moore’s bronze turds pop out, one after another, from the Henry Moore sausage machine.

But these are minor quibbles. In the main, it’s a roaring success. And all this — the return to chronology, the perfect presentational decisions, the air of clarity — is the handiwork of Tate Britain’s ­current director, Penelope Curtis. ­Regular readers of this column will know I have not previously been a fan of Curtis’s curatorial work. Her shows have felt muddled and her priorities wrong. But not this time. If she does nothing else of note in her museum career, she deserves the nation’s heartfelt thanks for what she has achieved here.