Ron Mueck plays with scale, religious imagery, and our minds. His works are so rare, you really must see this thrilling show in Paris. 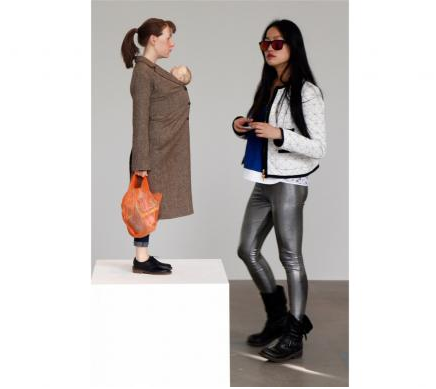 Every Ron Mueck exhibition is an event. It’s an event because Mueck is one of the slowest artists I have encountered in all my years of art criticism. Lucian Freud used to take his time, but compared with Mueck he was Fernando Alonso. In his entire career, going back to the 1990s, Mueck has made fewer than 40 sculptures. That is production at Vermeer pace. So the fact that the selection of his work that has opened at the Fondation Cartier, in Paris, includes three new pieces, alongside half a dozen that have rarely been seen, makes popping over on Eurostar practically compulsory.

Why Mueck takes so long is made clear by a new film directed by Gautier Deblonde, also playing at the Cartier. I urge you to watch it when you go, because it is a remarkable document of creation. Recorded over 18 months, it shows Mueck in his studio, agonising, pondering, scraping, unscraping, fiddling, smoothing, dabbing and poking as he goes about the excruciating business of making new pieces for his show. Before I saw the film, I believed him to be slow. After seeing it, I wonder he has ever managed to finish any sculptures at all.

The effort he puts in is the effort that is needed to take on reality at its own game. Where other sculptors are merely inspired by the human figure, Mueck seems ­actually to be re-creating it. As you probably know, he trained as a special-effects artist in the 1980s, working on The ­Muppet Show, honing his astonishing skills as a faker. When Mueck fakes up the toenails on one of his exact copies of humanity, or the wrinkles on a baby’s elbow, or the hair under an old man’s arms, he achieves levels of conviction that scramble your brain. Your head knows it isn’t a real baby. But your eyes refuse to accept it.

The Fondation Cartier is a see-through building on Boulevard Raspail. Because Mueck’s sculptures seek instinctively to blur the divide between art and life, between you and the exhibits, these see-through spaces seem especially suited to it. The nine sculptures scattered about the house of glass come in two basic sizes: huge and diddy. Or, to employ the pertinent language of Gulliver’s Travels, Brobdingnagian and Lilliputian. The Brobdingnagian ones tower over you. You tower over the Lilliputian ones.

Unsurprisingly, among the new pieces, the diddy outnumber the huge, because the amount of work needed to create a slab of realism as outsized as Couple Under an Umbrella defies imagining. Two old people, each of whom would be about 10ft tall if they stood up, are slumped on the gallery floor in their beachwear under a summer umbrella. She’s looking down, he’s looking out. Both of them seem to be waiting for something, rather than holidaying.

Because the two old giants form such a huge human lump, you need to walk around their perimeter a few times to accumulate their details. The way the sags in his body have been noticed and recorded is breathtaking. Even the hue of his washed-out swimming shorts is perfect. She, meanwhile, has a lovely grandmotherly gentleness about her that is typical of Mueck. What a warm-hearted artist he is. In her shapeless blue one-piece, the old woman is comfortably splodgy, with a frankness that makes 99.9% of her female predecessors in art appear thoroughly airbrushed. Only on your third circuit or so do you notice the gesture that is at the heart of the piece. At the back of the sculpture, the old man has clasped his wife’s arm in a tender squeeze of affection and reliance. Whatever it is they are waiting for, they are waiting for it together. This isn’t just a wonder of creation. This is a wonder of observation.

Ever since he made his dramatic debut at Charles Saatchi’s Sensation exhibition at the Royal Academy in 1997, Mueck has fiddled with human scale. At Sensation he stole the show with Dead Dad, a particularly diddy sculpture of a naked little man, no larger than a child. This tampering with scale has two main consequences. First, it transports his realism into the realms of surrealism and positions him alongside artists such as Bosch and Dali, who employed dramatic changes of scale to shock the ordinary world into moments of extraordinariness. Next, the scale-tampering succeeds in enlarging the emotions triggered by Mueck’s sculptures.

Woman with Shopping, another of the new works in the show, elicits our sympathy because she is so ordinary. In one of the perfectly observed Sainsbury’s shopping bags she is lugging back from the shops, there is a tin of beans. In the other, a pack of Yorkshire tea. The plainness of her pulled-back ponytail, her undecorated complexion, the vulnerability of the baby tucked into her coat, all these details serve to push our sym­pathy button. But what makes the work particularly effective is its scale. The woman is herself child-sized. Here is a sculptor using tininess as a megaphone that amplifies his message.

Mueck is so good at re-creating the convincing textures of the human body that his art has, in the past, strayed a tad too close to the realm of special effects. It’s easy to spend your time at a Mueck show behaving as if you were at Madame Tussauds: oohing and aahing, gasping and purring at the details. But one of the reasons this particular selection is so effective is because it makes clearer than before how much purpose and contrivance lurks behind all that realism.

While the upstairs at Cartier is see-through and public, the downstairs is a secretive-feeling basement where the show gets quickly darker. The key piece here, shown high up on the wall, features a man in dark glasses floating on a lilo. He’s wearing blue bermudas and his skin is shiny with suntan oil. Like the giant couple upstairs, he seems to be on holiday, and ought to be exuding relax­ation and contentment. But he isn’t. Instead, his mood is anxious and expectant. Because his arms are outstretched to catch the sun, because he’s hanging on the wall, rather than bobbing about in the water, because his skin is glistening with sweat, his similarity to a crucified Christ hits you immediately.

These obvious religious references appear throughout the show. Opposite the Christ-like man on a lilo, another new work, Youth, shows us a black teenager lifting up his T-shirt to reveal a bleeding knife wound positioned exactly where the Roman centurion stuck his spear into Jesus. Apparently, Mueck had in mind that marvellous image by Caravaggio of the apostle Thomas thrusting his finger into Christ’s wound because he doubts that Jesus is back from the dead.

Back upstairs, Woman with Shopping is an updated Mother and Child. And the giant chicken hanging from the roof, called Still Life, is another surrogate crucifixion, in the spirit of Rembrandt’s famous Carcass of an Ox. Man in a Boat, a tiny naked man sitting in a large wooden barque, feels as if it describes the only sailor left on the Ship of Fools.

Surprisingly, perhaps, the effect of these recurrent religious references is not to make the exhibition itself feel overtly religious. It doesn’t. Instead, the transformed biblical narratives seem to feed back the other way: back into the Bible, where they make those portentous texts feel less grand, more human, closer to us. How marvellous to see a contemporary artist dealing so inventively with such ancient themes. Contemporary art doesn’t get much more original or more thrilling than this.